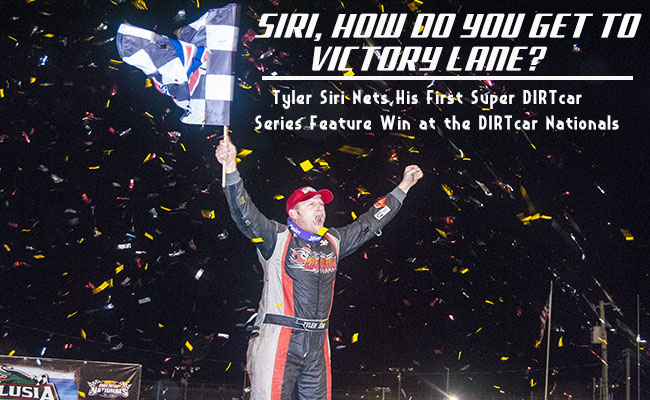 BARBERVILLE, FL – February 15, 2018 –  Horseheads, NY-native, Tyler Siri picked up his first Super DIRTcar Series victory and his first Gator in the postponed Big-Block Modified Feature on Night 10 of the DIRTcar Nationals. After starting on the outside pole, Siri battled hard and benefited from a high attrition rate among the leaders.

Pole sitter Justin Haers lead the race until lap 23 when his powerplant began showing smoke and fire; bringing out the first caution of the race. Seventh-place starter Stewart Friesen charged to the front and took the lead when Haers pulled off. The Halmar 44 of Friesen kept the lead until lap 26 when he too slowed and pulled off into the pits with a right-rear flat. Siri then inherited the lead and showed the way until the checkered flag fell.

In Victory Lane an ecstatic Tyler Siri said, “I’ll tell you what this is awesome. We’ve only been down here a few times and to come down here and get a Gator, beat the best of the best in the business, it’s a huge honor. I gotta say thanks to my team. We unloaded real fast when we got here. The car’s been awesome, and the track is great tonight. To hold off T-Mac and these guys, man this is awesome.”

“We set the thing up for the long haul. Justin [Haers] was really fast. I hate to see him have bad luck. Once Stewart [Friesen] and I got going, I thought I was catching him. I could put a slide job on him and tried a couple times, but it wasn’t quite there. The last couple of laps the car felt good on the top of one and two and on the bottom of three and four. I thought we had a really good piece to bring it home,” added Siri.

Runner-up Tim McCreadie picked up his first Gator of the week yesterday in the World of Outlaws Craftsman® Late Model Feature and came just one position short of another tonight.

McCreadie noted, “I gotta thank Vic and everybody that does this. We’ve got another run coming fairly quick and I hope to charge a little harder. Anything could happen with the way it was going (in reference to the attrition). For us to have a second right out of the gate was great. We want one better, but I think there’s more speed in the car, I just need to figure out a way to get it.”

A tense moment came on the lap-23 restart when Ryan Watt made contact with veteran Billy Pauch resulting in Pauch’s car slapping the Turn 2 wall on the left side, ultimately ending his night.

Qualifying was completed Wednesday Night before the fog rolled in. Here’s how it shook out:

Stewart Friesen lead all eight laps in heat number one, but the shocker of the night came from the back of the field. Defending DIRTcar Nationals Champion Matt Sheppard fell one spot short of qualifying through the Heat race. He went on to win the first of two Last Chance Showdowns of the night to make his way into the feature.

Young Gun Max McLaughlin battled wheel-to-wheel with veteran Jimmy Horton to take the checkered in heat two, while last year’s night-one Big Gator winner Justin Haers showed the way in Heat number three holding off the hard-charging Larry Wight. In the fourth and final Heat Tyler Siri also trumped a veteran of the sport by beating out Danny Johnson for the win.

During Wednesday’s qualifying session, Rich Laubach clocked in the quickest time securing the Billy Whittaker Cars Fast Time Award. However, Laubach would run into engine trouble during his Heat race and failed to start the Feature.

The Big-Block Modifieds are right back at it Friday night on the World’s Fastest Half-Mile on night 11 of the DIRTcar Nationals. They’ll pound the ground for 30 laps at Volusia Speedway Park and we hope to see you there. However, if you are not in Florida, you can follow the action with live audio and pay-per-view video at www.dirtvision.com.