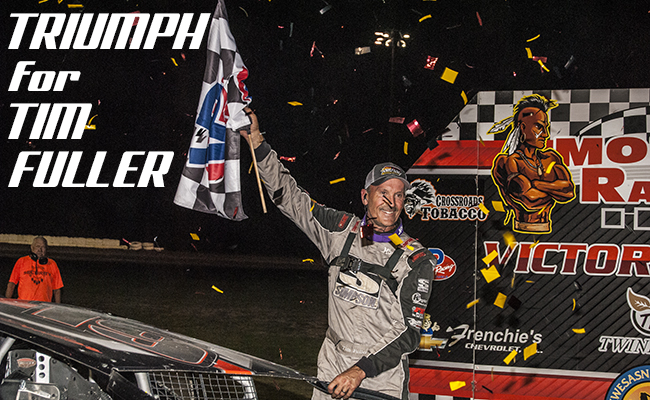 AKWESASNE, NY – September 16, 2018 – In a seesaw battle at the front, Tim Fuller proved his dominance at Mohawk International Speedway for the tenth time in 2018. The win is his first with the Super DIRTcar Series in 2018 and a record-extending tenth at MIR. Fuller becomes the second driver in history to sweep the 358 Modified and Big-Block Modified portions of the Mohawk Nationals. Mat Williamson put up a stout fight against the MIR Track Champion, but once again took second behind the no. 19 after finishing second to him the previous night in DIRTcar 358 Modified action. Billy Dunn quietly slipped into third place with a strong run in the no. 3rs.

Erick Rudolph, second in the Championship points standings, lead the field to the green flag with Ryan Arbuthnot on the outside. Rudolph ran the low line and kept the lead for the first quarter of the race, but behind him, it was not so peaceful. Jimmy Phelps moved up through the field to take second and began pressuring Rudolph for the lead. Unfortunately for Rudolph and Phelps, multiple restarts allowed Tim Fuller to jump into the top 3. While the no. 25r of Rudolph stayed glued to the bottom, Fuller allowed the car to drift through the middle until it grabbed traction on the high line. Fuller used that alternative line to catch and pass Rudolph for the lead on lap 27. Ryan Arbuthnot pulled into second place and gave Fuller a few runs on the high line but ultimately failed to complete the pass.

On lap 45 Mat Williamson started making noise at the front of the pack and pulled a slide job on Fuller in turn two for the lead. Fuller fought back on the bottom and the two raced side-by-side until the halfway point when Carey Terrance took an off-track excursion outside turns 1 and 2 to bring out the caution flag. After the restart, Williamson gapped Fuller and looked like it was his race to lose. With 25 laps remaining, Fuller began to reel in Williamson. Fuller then made the winning pass for the lead while in lapped traffic with 14 laps to go.

Tim Fuller has had difficulties in Super DIRTcar Series races in 2018 but a win on his home track should help cure those blues. In Victory Lane Fuller noted, “We’ve struggled on the Series. It’s not that we didn’t have the right stuff, it’s more that we didn’t have the manpower. It’s tough finding people. It’s a grind. But as far as Mohawk, we come in here and we have our act together. It’s going good.”

The no. 19 is powered by a W-16 engine, which can have an advantage against Big-Blocks on dry, slick surfaces. Fuller said, “Early the Big-Blocks were strong and could really drive off the bottom. For the last two nights me and Mat Williamson have had good runs. He was gone. I couldn’t run with him. I figured I’d let him go out there and burn up his tire because that’s the only hope I had. It finally blew off a little bit where he started dying a little bit on the outside and he had to run the bottom. That’s where this W-16 works.”
On conserving his equipment Fuller said, “These 100 lappers are tough. You can’t go crazy. You can’t go hog wild at the beginning of these races. You gotta be there at the end.” And he was there at the end, leading the most important lap, in the most important position for his first Series win of 2018.

Runner-up Mat Williamson had a familiar site at MIR for the second night in a row: The back of Tim Fuller’s car in Victory Lane. Williamson finished second to Fuller in a DIRTcar 358 Modified race the night before.

“We were struggling at the end. Tim had a really good car and he’s a hell of a driver. To finish second to him again, he’s no slouch. First Big-Block tonight what more can you say,” Williamson said.

While disappointed to run second again, Williamson pointed out that their year is far from over: “We’ll be at Oswego in a Big-Block and a 358. We’re not over yet so hopefully we can get a couple more wins before the end of the year.”

Billy Dunn started in the 21st starting position and worked his way up through the top 2/3 of the field to finish in third place. “The whole weekend wasn’t all that great. But it’s nice to be back here. I miss coming here every week. The track is awesome. We really struggled last night. We struggled all night tonight and we just threw something at it. The track blew off enough for us and we were lucky to get to third.”

Next race for the Series is Saturday, September 22 at Fonda Speedway for the NAPA Auto Parts Super DIRT Week Qualifier “The Jack” 100.