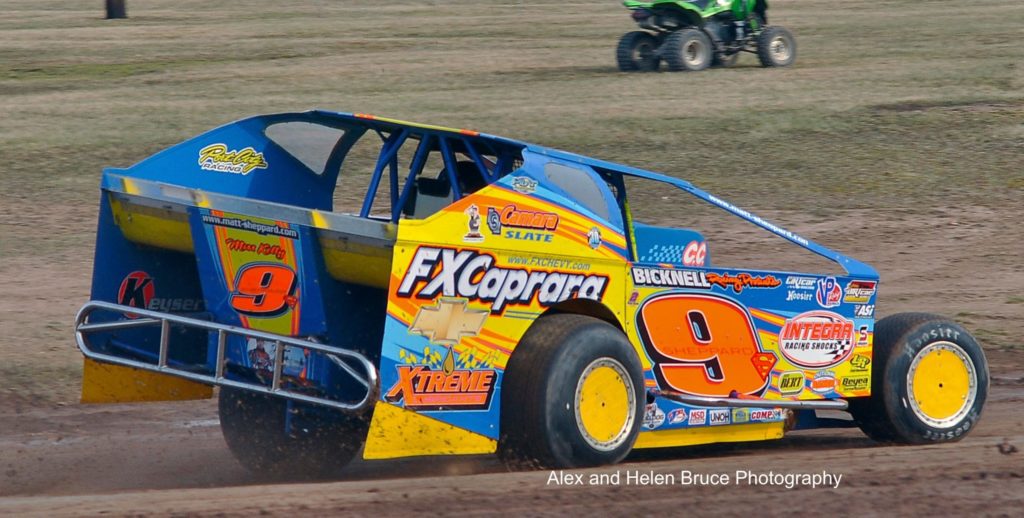 GRANBY, QUEBEC – July 23, 2013 – There’s nothing like a comeback, and three-time defending Super DIRTcar Big-Block Modified Series Champion Matt Sheppard was ready for one after mechanical issues in Monday’s series event left him in 26th place. And, sure enough, “Super” Matt Sheppard delivered a comeback the very next night, taking the win at Autodrome Granby Tuesday, July 23.

“We drove to the lead last night, and I think we had the car to win that race. I just had some bad luck, had a part break,” Sheppard, of Waterloo, N. Y., said of Monday’s race at Autodrome Drummond. “We rebounded well tonight, got the car back together. Hopefully we can keep this momentum going for the rest of the season.”

After breaking down in the 64th lap of Monday’s race while in the lead, the team got to work on the FX Caprara/XTreme Lubriccants 9s, determined to redeem themselves in Tuesday’s 100-lapper at Autodrome Drummond. Sheppard’s car was fast right off the trailer, claiming the second-fastest lap time overall in time trials.

The 9s stayed strong with a heat win, but Sheppard wasn’t placed in an easy position for the feature, redrawing the tenth starting spot.

Polesitter Steve Paine, also of Waterloo, N. Y., took the initial lead at the green flag, and by lap 14 was attempting to lap cars. He took the inside to get around Andre Gauthier, but Brett Hearn, then in second, circled around both to claim the lead before a caution in lap 15 brought the field back together.

Hearn kept his lead on the lap 19 restart, and Sheppard found an opportunity on the green to charge from fifth place to third, passing Gary Tomkins, Kayle Robidoux, and Monday’s series feature winner Dale Planck on the way.

Sheppard zeroed in on Paine in second, going for a pass on the inside, but Paine sped ahead, both avoiding Sheppard’s threat and passing leader Hearn for the lead in a lap-23 three-wide maneuver. Sheppard got by Hearn as well, and continued his pursuit of Paine, taking him just a lap later.

“When you know you’re catching those guys and you’re faster than them, you just want to try and take your time, and get by them cleanly. We didn’t really have to take our time tonight – this car was a rocket ship,” Sheppard said. “This car was awesome tonight. Pretty much everywhere I wanted to go, it went there.”

For the remaining three quarters of the race, Sheppard never relinquished his position, leaving those in his wake to battle for second. Five more cautions hit the field before race conclusion, including one with six laps to go, keeping racers on their toes as they battled for positions on restarts.

Hearn continued in second after Sheppard, sometimes defending against Paine, for several laps until Planck edged into the top standings. Planck pulled up beside Hearn in lap 60, racing side-by-side with him until yellow flag conditions in lap 71. Hearn pulled into the pits under caution to leave Planck in second.

Meanwhile, a car from the back of the field was steadily gaining ground. Justin Haers, of Phelps, N. Y., started 27th in the feature after a wreck in his heat caused him to finish sixth. Haers entered the feature, still with front-end damage, as a provisional and expected to get just a couple laps out of the Phelps Cement Products No. 3.

Haers cracked the top-ten in lap 51 and, off a lap-60 restart, continued to gain momentum to claim seventh. By lap 85, he was third, and off a lap-94 restart he challenged Planck for second. Planck wasn’t giving in, but Haers found speed on the outside of turns 3 and 4 to take second in lap 97. Haers powered forward, but wasn’t able to catch leader Sheppard before the checkered flag.

“From where we started, it was definitely a great race for us to get a second-place finish,” said Haers, who, like Sheppard fell to mechanical problems in Monday’s race while leading. “Last night we were leading the race and broke, and we got in a wreck in the heat race tonight. We were just going to take a lap in the feature and get the car back together because we bent a front axel, wrecked the body in the heat race, knocked a shock off, just had some problems. We just put our heads down and went right to work to get everything back together. I can’t thank my my crew enough, and Matt Sheppard’s guys – they helped us get the car back together.”

Matt Billings, of Brockville, Ontario, also made a strong charge from the rear of the pack, starting 18th and finishing third. Hearn finished fourth after a late-race pit stop under caution took him from second to the rear of the field. Monday’s Super DIRTcar Series feature winner at Autodrome Drummond, Dale Planck, took fifth after starting seventh. Rounding out the top ten are Robidoux in sixth, Paine in seventh, Pete Britten in eighth, Danny Johnson in ninth, and Yan Bussiere in tenth.

The Super DIRTcar Series continues with an early-August swing westward, starting Monday, Aug. 5, at Merrittville Speedway for the Bob St. Amand Sr. Memorial. The series then heads to Ionio, Mich., for its second-ever feature event at I-96 Speedway.