WEST LEBANON, NY – As the fog descended on The Valley in the closing stages of the 100-lap Mr. DIRT Track title, Matt Sheppard’s winless streak lifted as he crossed the line ahead of a charging Mat Williamson and Marc Johnson.

Stewart Friesen led most of the race after jumping pole-sitter Kevin Root for the lead. Friesen stayed at the point until 20 laps to go. Sheppard, who had been charging through the field from 10th, got around Friesen on his way to the $13,500 payday.

Sheppard, from Waterloo, NY, came into the night’s racing without a win on the tour in 2021.

His lack of a stop in Victory Lane this year was not for a lack of speed. The #9S took both Billy Whittaker Cars Fast-Time Awards during this Memorial Day Weekend’s doubleheader at Weedsport Speedway and Lebanon Valley Speedway.

“The track was just weird enough for us that it suited our style tonight and this car was really good off the trailer,” said Sheppard. “Things just went our way.”

The temperatures were cool and the air was heavy with humidity which ended up throwing many of the drivers for a loop including the regulars.

Friesen was out in front for the first 80 laps of the race as Sheppard picked his way through the top third of the field. A caution came out with 19 to go when Peter Britten took a hard tumble in Turns 1 and 2. Fortunately, the Queensland, Australia native was able to climb out of his race car and walk away. 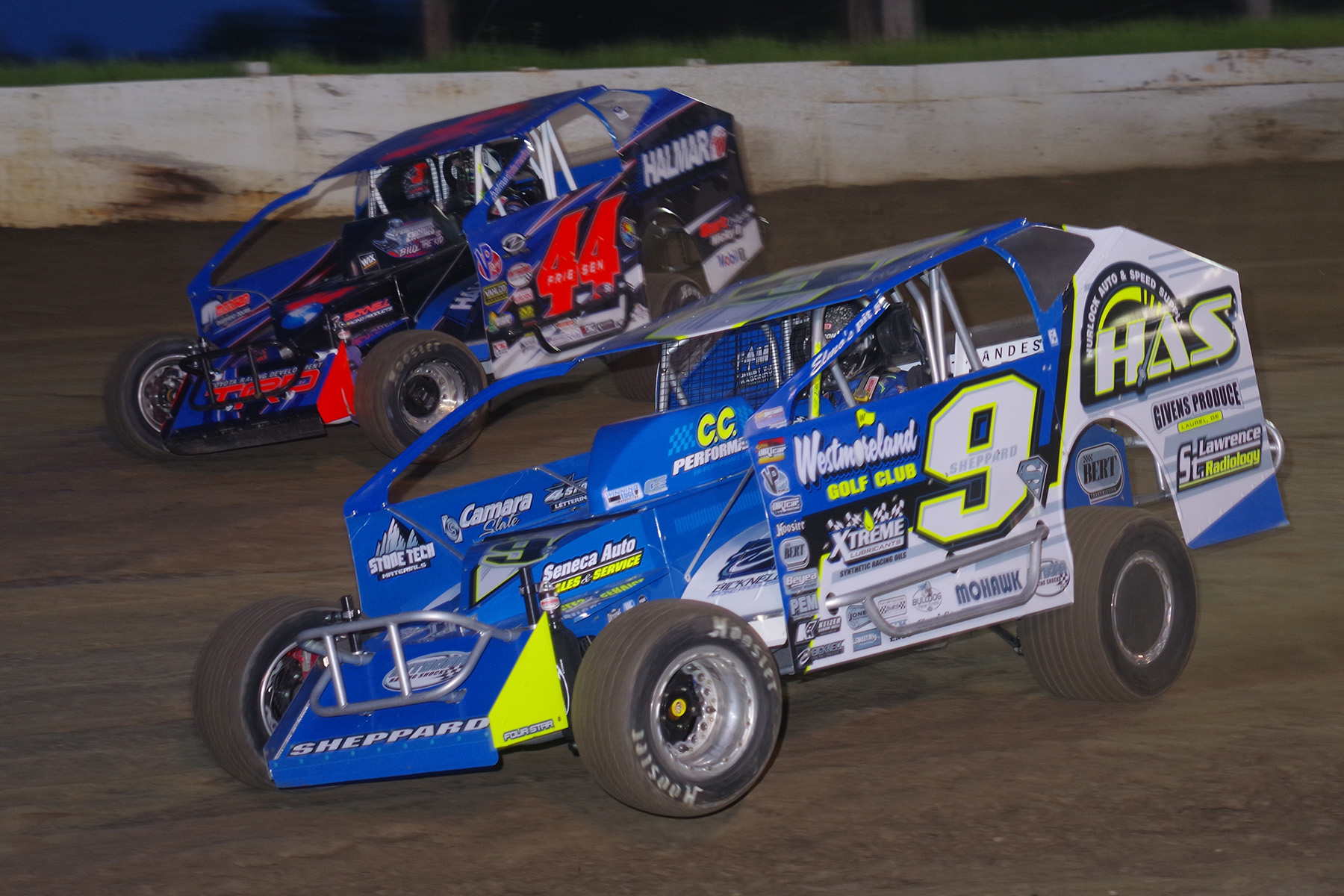 During the red flag period, the fog began to settle into “The Valley”.

“I lost all visibility the last 15 laps,” Sheppard noted. “I could see the wall on the outside so I tried to stay as close to it as I could without hitting it. I knew Williamson was behind me there but I was just trying to look where my own car was going.”

Nothing was easy about the win. Sheppard pulled the 10th starting position in the redraw which gave him an uphill climb.

But he and the #9S team were up to the task. It was a long green-flag run that gave Sheppard his edge to pass the #44. Soon after Sheppard got around Friesen, smoke began to show from under the hood before going completely up in flames.

The long green-flag run was the key, however.

“Once I got some tire heat the car was pretty good,” said Sheppard. “I made a lot of my moves on the bottom but it also felt pretty good on the top too. I was fighting the tires when we started having those restarts at the end. I didn’t really like how they felt after a caution. I’d go to the bottom and the tires were spinning. When we had the long greens I felt like I was really good. That’s when I did all my damage.”

Runner-up and last night’s winner Mat Williamson was locked in top five battles for all 100 laps on the high banks against the likes of Friesen, Sheppard, and Lebanon Valley hero Andy Bachetti. 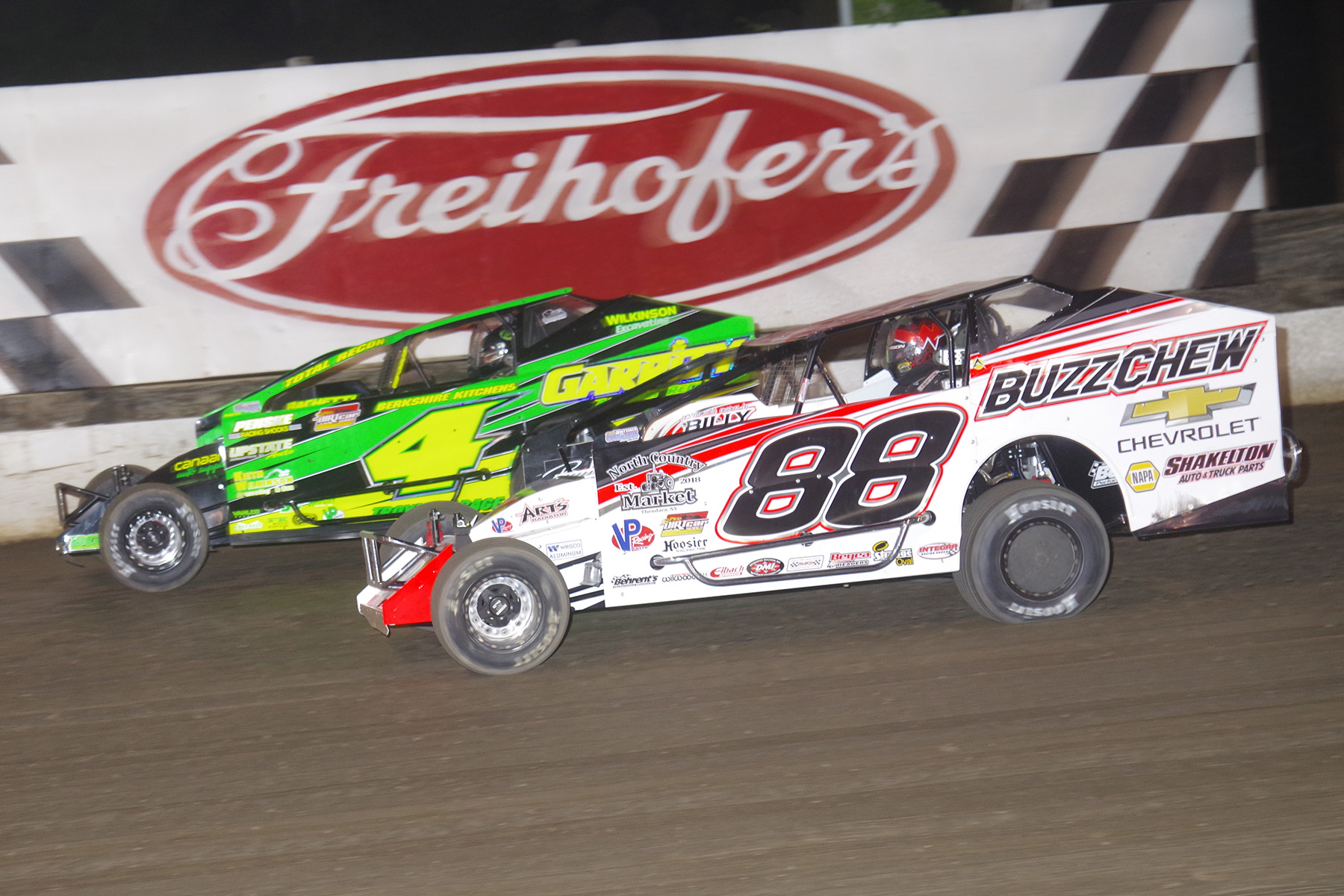 “It was an attrition race,” Williamson noted. “I felt like at the end we had one of the best car. I was reeling Stewie [Friesen] in but the cautions killed us. We were there. We had a good enough car for second and it was hard-earned. Matt was good at the beginning on the long runs and that’s what won it.”

Including last night’s win, Williamson had a 1.5 average finish for the Memorial Day Weekend doubleheader.

“I had to drive my car so freaking hard,” Williamson said. “That made it hard to be consistent. I’d put together 3 or 4 laps and I’d catch him and then overdrive the corner. We just had to race so hard. The track was different than any other time all year. We’ll take a second place to get back in points.”

The Buzz Chew Racing #88 was there at the end running in Sheppard tire tracks. The championship race is wide open once again and Williamson is poised to get back to the top.

Marc Johnson’s calm approach to racing at high speed and high-intensity tracks paid off with a third-place finish against the Series stars.

“My guys and I looked forward to this since it was announced,” Johnson noted. “We were hoping to run well and we put it on the front stretch with the top 3. I am so happy for my guys and my sponsors.”

The odd weather created a surface that was difficult to predict but very racy.

“With these track conditions, I was just taking it lap to lap,” said Johnson. “Seeing out there with the fog and the dew made it tough. We just took it lap by lap.”

Not only did the P10 redraw work out for Sheppard but since it was the lowest position he could pull, the #9S gets a free tire courtesy of Hoosier Racing Tire.

Erick Rudolph picked up back-to-back Hard Charger awards. This time Rudolph made up 15 positions to finish an impressive sixth.

Next on the Series schedule is the Horsepower 100 at Albany-Saratoga Speedway on Tuesday, June 22. Be sure to follow the Super DIRTcar Series on social media to stay up to date. Check us out on Facebook, Twitter, and Instagram.