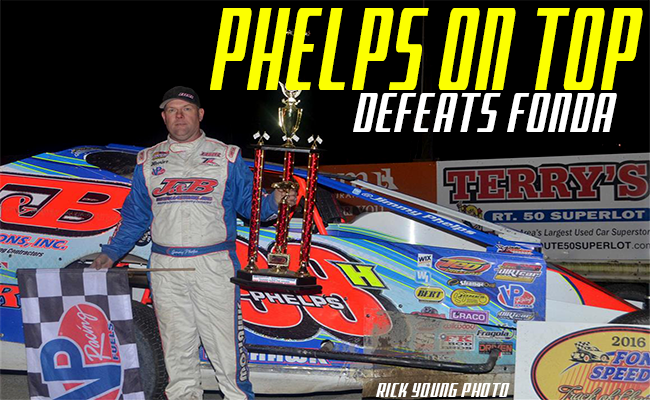 Phelps Fights For Win at Fonda

Phelps Fights For Win at Fonda

FONDA, N.Y. – Sept. 24, 2016 – Jimmy Phelps battled hard for his victory Saturday night in the Mohawk Valley 100 at Fonda Speedway as he took the checkered to grab his second Super DIRTcar Series win of the year and his first ever victory at Fonda Speedway.

“I think this is my first top five here,” said Phelps with a big grin on his face. “You know it was funny. I felt pretty good in qualifying but we were a few tenths off and I figured it had to of been me so I went out there and I just ran as hard as I could. I didn’t know if we could hang on but I knew my car was pretty good.”

Mike Mahaney and Jimmy Phelps brought the 30-car field to the green.

Phelps claimed the top spot on the start and pulled away to an early lead over Mahaney, Bobby Varin and Matt Sheppard.

Mahaney drove under Phelps and beat him to the line on lap 27 to reclaim the lead.  Phelps didn’t give up though as they battled back-and-forth for the lead.

Phelps caught the back of the field on lap 37 allowing Mahaney and Sheppard to gain some ground on the 98h machine.

Just as Mahaney passed Phelps on the backstretch the fifth caution of the night was brought out on lap 43 allowing Phelps to regain the lead.

The lap 47 restart saw cars tangle going into turn one as Bobby Varin went spinning, bringing out the sixth caution.

Phelps led the field to the halfway mark over Mahaney, Sheppard, Decker and Ward. Decker then pitted on lap 50 with a right rear flat forfeiting his fourth place spot.

Pat Ward and Jeremy Wilder split Sheppard going into turn three and wrestled around him for third and fourth pushing Sheppard back to fifth on lap 54. Sheppard soon came to a stop on the backstretch and went pit side to change the right rear tire on the 9s machine.

Fourteenth starter Tim Fuller took advantage of the final restart and flew to the outside as he shot into the fourth spot on lap 66.

With 25 laps to go Phelps and Mahaney were checked out as Fuller used the high groove to try and close in on the top runners.

Phelps caught the back of the field once again on lap 82.

Fuller was knocking on Mahaney’s doors on lap 83 as he moved to the bottom to try and gain some momentum on the No. 88.

Hearn reeled in Friesen and drove by him on the bottom and advanced to fourth on lap 90.

Mahaney was working the bottom of the speedway as Fuller started working the outside for the runner up spot, putting pressure on Mahaney.

Fuller then slipped passed Mahaney to take the runner up spot with seven laps to go.

Hearn made a late race charge as he passed Mahaney on the last lap to advance into the top three.

Phelps No. 98h was fast and flawless as he pulled away with a steady lead. At the checkered it was all Phelps taking the win over Fuller and Hearn.

Phelps and Mahaney had a strong battle going as they swapped positions for the lead early on in the feature.

“Mike woke me up a couple times there. I didn’t really know where I needed to restart from. He rolled me on the bottom of that one restart and luckily the yellow came back out and that put me back out front so I could switch lanes. Then we got hung up there in traffic he showed me his nose right as the yellow came again so we saved a couple of bullets there. I knew it would be tough to get back by him if he got by me.”

Fourteenth starter Tim Fuller thought he had what it took to beat Phelps if he had another caution to help close up the field and give him a run for his money.

“Around lap 60 we had a restart and it all opened up for me. A lot of guys got worse and I got better. I think they died a little bit while I maintained,” Fuller said. “The tires wore and I made sure not to abuse them early like some other guys. I think we were good enough in the end to win it. I think it would have been interesting if we had a caution. Phelps did good, he did what he had to do.”

Brett Hearn made a late race charge from his ninth starting spot and a last lap pass to make a podium finish.

“We actually moved back a couple spots in the beginning around twelfth. We moved up to the outside and got freed up a bit and got some passes done,” Hearn said. “I would say the last five laps I was just as fast as anyone. If we had a single file restart there in the end maybe we would have been able to make something happen.”

Race Notes: 31 modifieds attempted to qualify and 30 cars started the feature. The Pole Position Raceway fast time award went to Brett Hearn with a 20.160. Eight cautions were brought out on laps 3, 9, 18, 23, 43, 47, 53, 60 and 64. Friesen raced the truck race early in the day in New Hampshire and flew straight to Fonda to race. Sheppard was placed a lap down for bringing out an intentional yellow by stopping on the track and changing a tire that wasn’t flat.

The Super DIRTcar Series will be taking a break, as teams will be preparing for the 45th annual Super DIRT Week Oct. 5-9.