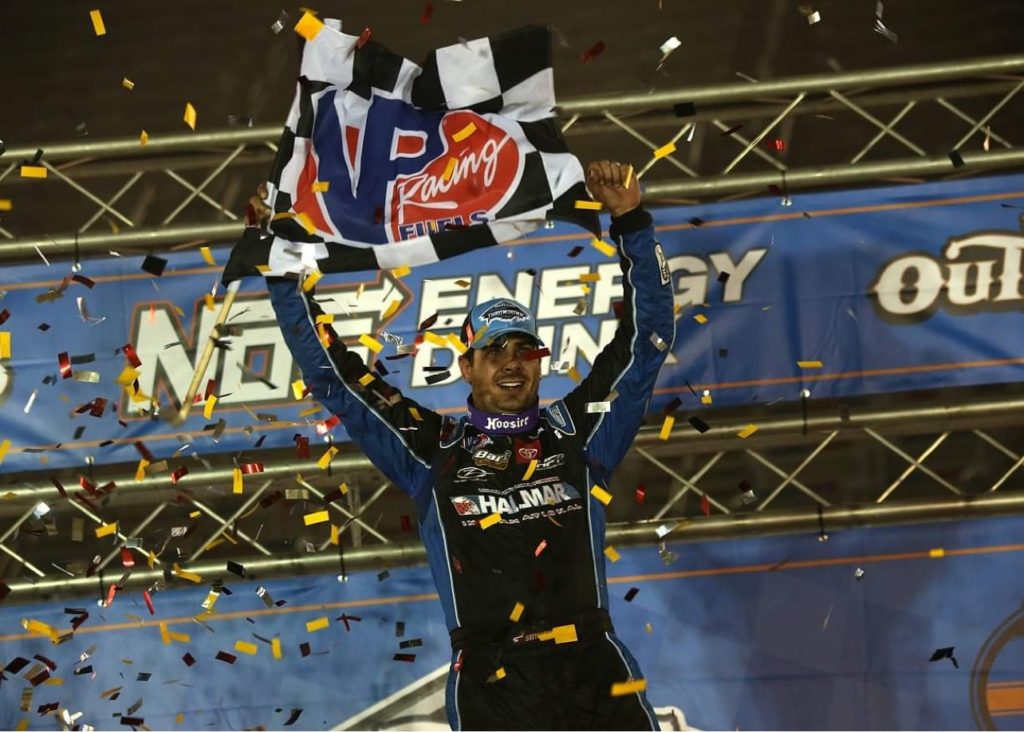 He did so in a gladiator fashion worthy of the iconic sword he was awarded after piloting his Halmar Racing #44 chariot from eighth to the lead in the 40-lap World of Outlaws Bristol Throwdown Feature.

“This is a huge stage to get a win on in our Northeast Modifieds and I appreciate everyone inviting us here,” Friesen said. “Our cars put on excellent racing like they do at Charlotte and Volusia. It was really cool for us and to get the first win here is really special.”

Friesen was fastest overall in Time Trials and took the Billy Whittaker Cars Fast-Time Award by running a 16.574 sec. lap. That time was nearly a second faster than the Quick Time set during Thursday’s practice session.

He then won his Heat Race, but drew the eight in the redraw – a fate of luck he initially thought killed his chance at a win.

From there, he passed seven cars on his way to claim his now coveted World of Outlaws Bristol Showdown sword.

“I found the top side pretty early,” Friesen noted. “I thought pulling eighth in the redraw was going to be the kiss of death with the way the Heat Races went. The track crew did a great job working the outside. I started thinking about the top when Tyler Courtney in the Sprint Car’s Last Chance Showdown was on the outside making some hay. I knew it was there but it just needed to be cleaned up. We raced all around the track for the first few laps and when my tires came in, away we went.”

Bristol Motor Speedway can be intimidating to some drivers, but Friesen has been circulating the Bristol highbanks more than anyone else over the last month. He raced in both the NASCAR Cup Series race on dirt as well as the Camping World Truck Series race. For the Niagara-on-the-Lake, ON native, the initial shock and awe has worn down and he could approach the race like any other.

“The NASCAR experience on the dirt here helped,” Friesen noted. “Not with the setups though. I got a lot of help from some of the late model guys. That paid off. We did a lot of homework.”

With the fast-time award, a Heat Race win, and a racy Feature victory, Friesen looks tough to beat at Bristol.

Mike Mahaney, from King Ferry, NY, started the race in the top spot after redrawing first place and collecting a special bonus from SRI Performance. He built a huge lead in the early going before cautions allowed Friesen a few opportunities to pass cars and get up to the rear bumper of the #35.

After the #44 went by him, Mahaney held tight to second place until Keith Flach slowed in front of the leaders on the backstretch and bottled Mahaney up. Three cars got around him but he was able to hold on for fifth after dominating the early stages.

Tyler Dippel picked up a career-best second-place finish with the Super DIRTcar Series. His #1D Teo Pro Car stayed up front all race after rolling off from third. At the initial start of the 40-lap Feature, Dippel won the drag race with defending Series champion Mat Williamson, from St. Catharines, ON to grab second.  After that, the only car to pass him was Friesen on his way to the win.

“Once Friesen went around and showed us the top would work I started searching around,” said runner-up Dippel. “The crazy part to me was working through the dirty air. When you got up on someone close you had to have the left or right front sticking out to get the nose in the air. I’ve never felt that in a dirt car besides the Syracuse Mile.

“The speed sensation is unbelievable. The G-forces really suck you down into the seat. It was fun. I had a blast out there.”

The final podium step was filled by Mat Williamson, driver of the #88 Buzz Chew Racing machine. Williamson and his team worked hard to squeeze a few more tenths of a second out of his Bicknell Racing chassis and Billy the Kid engine.

We spent last night testing some things and trying to get better but tonight is the best we’ve gotten it,” Williamson said. “You’re going so fast I didn’t expect the race track to race as well as it did. When Friesen went around me on the top I had fully expected there to be no one up there.”

“It’s a whole different ball game down here,” Williamson noted. “It was a good thing that no one had a hometrack advantage because it had us all figure it out together.”

Williamson has won some huge races in front of some big crowds but Bristol is incomparable.

“I’m happy and I hope it was a good show for the fans,” he said. “It’s really cool for the modifieds to get an opportunity like this.

The Feature was hotly contested from the top to the bottom of the field. Erick Rudolph, from Ransomville, NY, took his #25R up 15 positions to claim the night’s hard charger award. He finished in the eighth position after 40 laps and 20 miles of racing.

The legendary “Franklyn Flyer” Billy Decker in the #91 Gypsum Racing Big Block had a difficult start to the night as he spun on the first lap of his Heat Race and was collected by Chad Phelps in the #X car. He was forced to take provisional but passed 15 cars himself to finish twelfth.

Tim Sears Jr., in the #83X, has backed up his great finish at Can-Am Speedway with a fourth-place finish on the Bristol high banks. It’s going to get tough for Sears to sneak up on the Series stars because now they know that yellow #83X is coming for the front.

Mike Mahaney, from King Ferry, NY, started the race in the top spot after redrawing first place and collecting a special bonus from SRI Performance. He built a huge lead in the early going before cautions allowed Friesen a few opportunities to pass cars and get up to the rear bumper of the #35.

After the #44 went by him, Mahaney held tight to second place until Keith Flach slowed in front of the leaders on the backstretch and bottled Mahaney up. Three cars got around him but he was able to hold on for fifth.

Race fans can catch the Super DIRTcar Series again tomorrow at the World of Outlaws Bristol Throwdown finale. It’s a 40-lap, $10,000-to-win Feature, which also pays $1,000-to-start. Get your tickets at BristolMotorSpeedway.com or tune in live on DIRTVision.