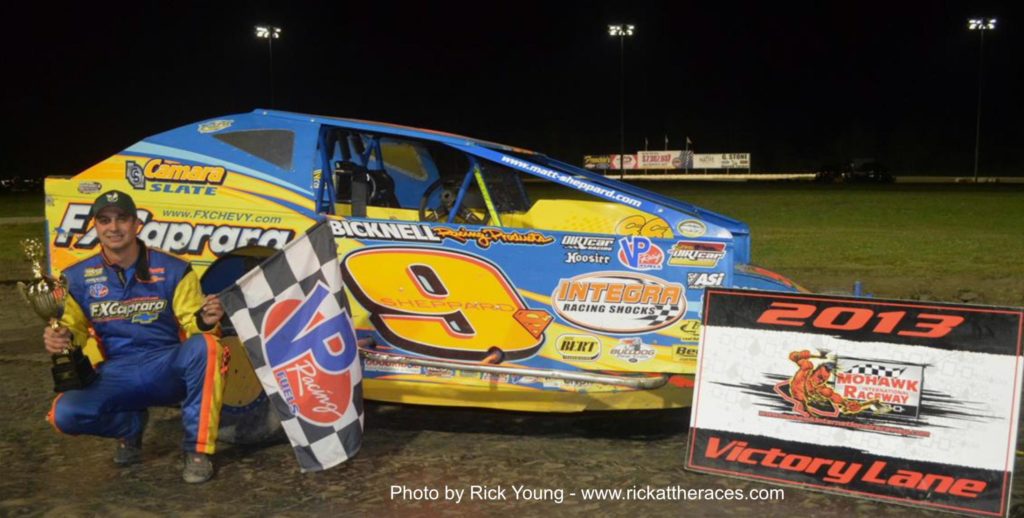 Sheppard charged forward from his 11th starting position to crack the top-five by lapp 25. Soon enough, Sheppard was in second and challenging then-leader Billy Dunn for the top spot. Sheppard took the lead in lap 56, and the two swapped positions several times in an exciting battle to the finish.

“Me and Billy went at it for…I don’t know how many laps, but it seemed like a lot,” said Sheppard, the three-time defending Super DIRTcar Series Champion. “It was a lot of fun. All I know is we had a good car, we got up front.”

The race initial leader, Brett Hearn, also stayed in contention until the very end. Hearn started third in the lineup, but claimed the lead almost immediately over Lee Ladouceur and Brian McDonald.

Dunn, whose success over the season at Mohawk International Raceway earned him the track championship in the 358-Modifed division, was equally strong at the green flag and had made his way from ninth to third by lap eight. He knew the track, and by lap 11 he was challenging Ladouceur and quickly able to go for the pass.

Now in second, Dunn hoped to score his first-ever Super DIRTcar Series victory and set his sights on race leader Hearn – a seven-time Super DIRTcar Series champion and the current series point leader. Dunn was just a car length behind Hearn when a lap-18 caution slowed the race and put the two leaders on the front row for the double-file restart.

Hearn stayed ahead off the restart, but Dunn was in hot pursuit and quickly gaining momentum. Dunn made his way around Hearn in lap 24 and quickly established a hefty lead over the rest of the field. Even lapped traffic in lap 34 didn’t slow Dunn as he circled the Mohawk 3/8-mile.

In lap 44, Haers slowed to a stop on the front stretch to bring yellow conditions to the track, and with it tension as the leaders pulled up next to each other for the restart. Dunn kept the lead, but another caution in lap 52 kept him from going very far.

This time, Sheppard charged ahead off the restart from the second row, passing both Hearn and Dunn for the lead. Neither early race leader was ready to give up so quickly though, and Dunn continued at Sheppard’s tail with Hearn not far behind.

A lap-64 caution brought by Gage Morin again brought the field together, and leader Sheppard chose the outside pole as his starting position on the restart. At the lap 69 restart, Sheppard charged ahead, but Dunn kept up. Hearn gained some speed too, and by turn three they were three-wide in a battle for the lead. Dunn sped ahead to claim the top spot by lap 70.

Erick Rudolph slowed in the backstretch soon after to bring a lap 73 caution. Sheppard claimed the lead over Dunn off the restart and kept it as the two maneuvered through lapped traffic. Dunn stayed within a few car lengths of Sheppard the whole time, nearly taking him on the inside at every turn, but Sheppard’s 9s outpaced Dunn’s 49 on the straightaways.

Lapped traffic slowed Sheppard in lap 92, and Dunn took the opportunity to speed ahead, but his last stint leading the race didn’t last long, as Sheppard passed him just a couple laps later.

“The track was so racey. The grooves kept changing, and, depending on how we caught lapped traffic, it was just back and forth and back and forth,” said Sheppard. “He (Dunn) could have easily won this race just as easy as I did tonight. It went my way and I just had it at the end. He’s going to get one of these pretty soon.”

Sheppard led the race at the checkered flag to claim his third series victory of the season, and Dunn came in a close second.

“It was good racing with Matt,” Dunn said. “The line of the track changed three or four times during the race, and lapped traffic was a little tough to get by. It was good racing, he just got the right break at the end.

Rounding out the top five in Saturday’s feature race are Hearn in third, Mat Williamson in fourth and Matt Billings in fifth.

The Super DIRTcar Series continues with the famed NAPA Auto Parts Super DIRT Week XLII. On Tuesday, Oct. 8, the series returns to Rolling Wheel Raceway Park to finish the postponed Stars & Stripes 100. Then, on Sunday, Oct. 13, the stars of the Super DIRTcar Series take to the “Moody Mile” at the New York State Fairgrounds for they Syracuse 200. For more information about NAPA Auto Parts Super DIRT Week, visitwww.superdirtweekonline.com.