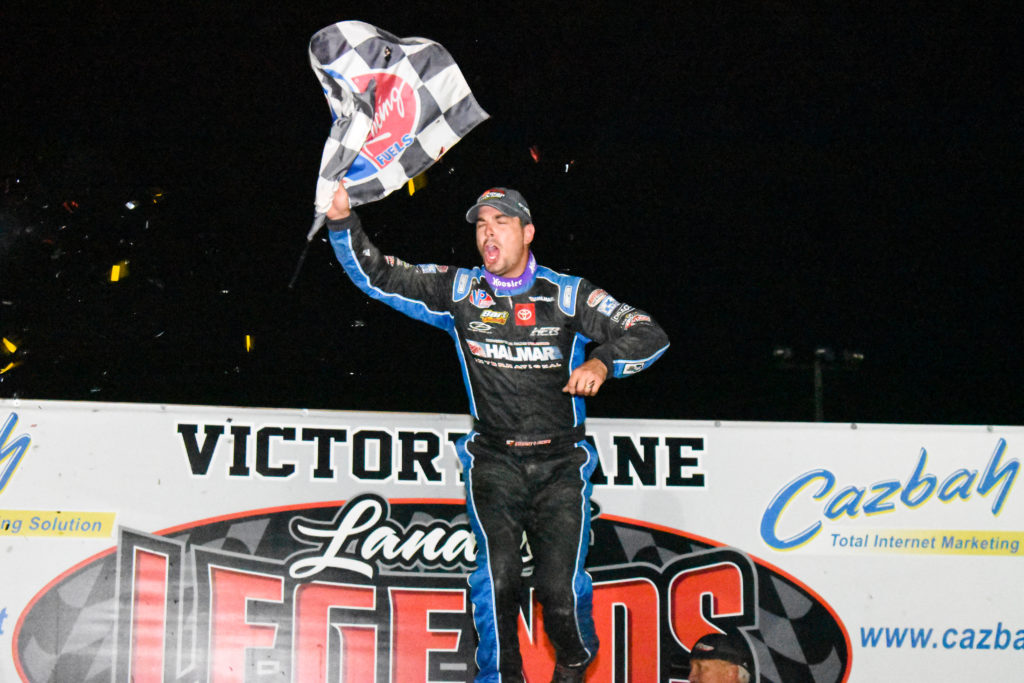 Two fierce competitors, Stewart Friesen and Mike Mahaney, lead the 26-car Super DIRTcar Series field to the green flag but the #44 Halmar car came out on top in the end.

When the green flag came back out Mike Mahaney found grip on the top side and pulled away from Friesen and the rest of the field.

As the race wore on, the smooth bottom became the dominant line and Friesen was able to capitalize on that for the race-winning pass. Mahaney was forced to settle for third.

“Mahaney has been fast everywhere all year,” noted Friesen, the driver out of Sprakers, NY. “It was tough. We got him on the initial start but then on the restart he got lane choice. He got out there, but we were able to track him down and pass him.”

Friesen had not graced the Land of Legends Raceway Victory Lane in a Big Block since 2005.

“This has been a tough track for us,” the race-winner noted. “I got a couple Big Block wins in 2005. The Madsens were about to fire me I think but then I got two wins in late August. But we haven’t really had a good package for this place. We threw a bunch of stuff at it tonight and after Hot Laps it was good.”

Racers and teams came into the night’s races with a lot of questions about the track surface and how it would change throughout the evening with two Big Block Features plus DIRTcar Sportsman Modified qualifying.

“We ran the same tires in the second Feature as the first, “Friesen said. “We put a new set on for the Heat Race but we went back to the old ones for the race. Not sure if it was the right call but it worked out.”

Runner-up Tim Fuller had the crowd on their feet in the final 10 laps. Fuller took his black #19 to the topside after a late-race restart for Dave Marcucilli, who stopped on the backstretch. Fuller passed Erick Rudolph, Matt Sheppard, and Mike Mahaney in the space of a few laps. The North Country ace was reeling in Friesen for the lead, but he ran out of time as the right rear started getting hot.

“When the right rear cooled down under caution I was sitting in eighth. I knew I could ring that outside for a little bit before the right rear overheated. You get what you can get like that at the end. Friesen was just too strong. I was able to catch everybody slamming to the bottom and running nose-to-tail. It was cleaner down there. Smooth. No rubber. You had to be on the bottom or way outside.”

After a great start off the pole, Mike Mahaney kept the #35 in a podium position for the duration of the 60-lapper.

“I want to thank my fiancé Mandee for pulling the pole in the redraw,” Mahaney said with a smile. “It’s been a while since I’ve had a decent starting spot. It seems like it’s been since Bristol. We were terrible in the first feature. We made some wholesale changes to the car. I think I made it slightly better in the Heat Race and much better in the Feature. We seem to be really loose or really tight.”

“I got lane choice on the second start, so I took the top,” Mahaney said. “My top groove kind of went away. It didn’t surprise me that Friesen got by. After how poor the first Feature was, I just knew I had to get a good finish and stay on my game plan. Friesen just had a better, faster car tonight.”

UP NEXT: The Super DIRTcar Series returns to Orange County Fair Speedway as a part of their annual centennial celebration. This year the Centennial 102 is 102 laps and $10,000-to-win The Big Blocks take the green on Thursday, April 12.