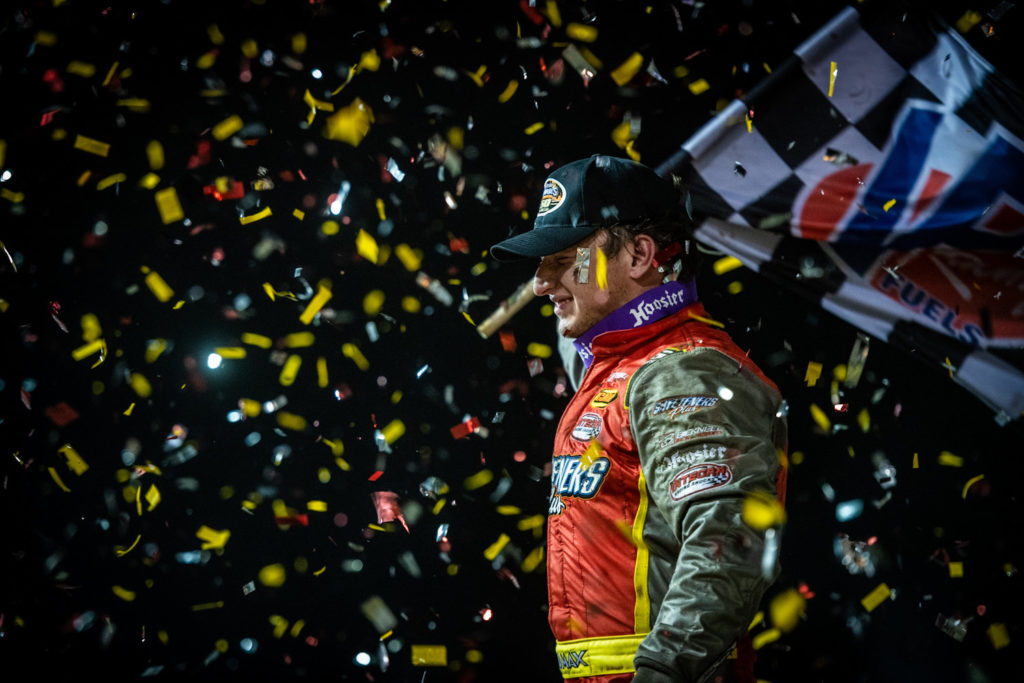 The 20-year-old pilot of the #32C Sweetener’s Plus Big Block Modified was just barely able to box out future Hall of Famer Billy Decker in a wild finish where the two swapped lines on the track trying to block and slide each other at the same time. Hard charger Michael Maresca in the #7MM car cruised from 19th to third in an amazing run through the field.

After a lengthy rain delay, drama built quickly in the 30-lap Feature as McLaughlin made contact with seven-time Series champion Matt Sheppard on the first lap, sending Sheppard’s #9S up the race track and into Peter Britten’s #21A. Sheppard made his displeasure with McLaughlin known during the caution flag, but was able to recover for a fifth-place finish.

“I got into the water there on lap one,” said McLaughlin, of Mooresville, NC. “It was a bonehead move, I guess. They checked up and he [Matt Sheppard] started pushing and I figured I’d go right below him. The left front hit the water and pushed up and I got into Matt. I hate that. That’s kind of what I was thinking about the whole race.”

When the race returned to green flag action, McLaughlin had to contend with some heavy hitters. “Mad Max” found a way around defending Series champion Mat Williamson as well as “The Baldwinsville Bandit” Jimmy Phelps, who started on the outside pole.

However, once McLaughlin took the lead on Lap 15 there was no time to relax. Decker had his Gypsum Wholesalers #91 at full song around the top side of the speedway in pursuit during the closing stages.

“I didn’t really know where he was but I knew he was coming around the top,” McLaughlin said. “I knew I had to change something and I saw the [signal] sticks get smaller and smaller. I had to do something different.”

With an adjustment of his line, McLaughlin was able to hold Decker’s crimson #91 at bay.

Decker did all he could to try and pass for the lead.

“We had to go where he wasn’t,” said Decker,  of Unadilla, NY. “I think we were as good as he was on the bottom, but he fired a little better on the restarts than we did. After a few laps, I think we got it rolling so it was one of those deals where he had to stick to his lane. I started hazing the outside and closing the gap. He obviously got the signal from the infield to move. If he didn’t, he was going to finish where I did. He had to move and I didn’t get him soon enough.”

Michael Maresca, from Pierrepont, NY, advanced 16 positions to capture his second consecutive third-place finish. The #7MM started the night behind the eight-ball.

“We buried ourselves in a hole in qualifying,” Maresca said. “We had a really good car all night. I think with it being a little bit wetter, I think it threw me off on my gear selection. We were able to capitalize on good restarts.”

A fast, widening race track gave him what he needed to work through two-thirds of the field in 30 laps. Unfortunately, for the pilot of the St. Lawrence Radiology Big Block Modified, Decker and McLaughlin were just a click faster.

“Congrats to Max and Billy,” Maresca said. “I couldn’t keep up with them. I think I was just a little bit under-geared for that. But I know our car is good so we are just going to keep trucking and hopefully contend for a win tomorrow.”

Catch all the action in person or on DIRTVision on Friday, February 12 at Volusia Speedway Park as the Super DIRTcar Series take on The World’s Fastest Half-Mile for the fourth night in a row alongside the World of Outlaws Morton Buildings Late Models.