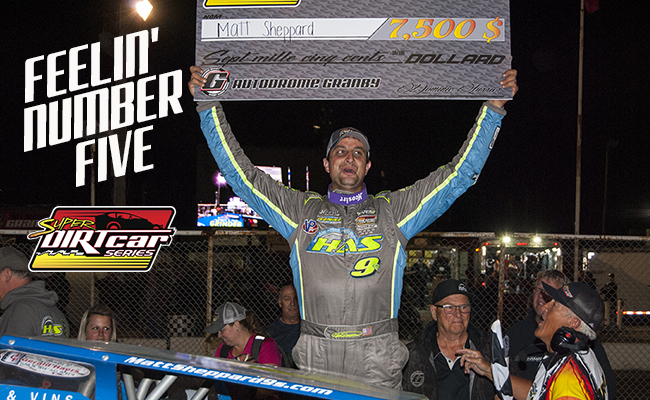 GRANBY, QUE – July 24, 2019 – Super Matt Sheppard made it through an eleven-car pileup on lap 29 to drive through the field for his fifth Super DIRTcar Series win in 2019. Sheppard took the lead from Queensland, Australian driver, Peter Britten on lap 84 after battling wheel-to-wheel lap after lap. Drummond winner Erick Rudolph rounded out the podium after driving up from the twelfth starting position.

With the win at Granby, Matt Sheppard is now third on the all-time Super DIRTcar Series wins list. His sixty-sixth win breaks the tie with Billy Decker. Sheppard needed some luck, some speed, and expert race craft to come out on top at the end of the challenging 100-lap race.

Sheppard was pleased to come back with a win after a difficult night at Drummond. He said, “We had a very good car last night[at Autodrome Drummond]. We got up to second and cut a tire down and that ended our night.”

The pilot of the No. 9s almost failed to finish the race on two occasions, much less win it. First Sheppard managed to avoid the serious crash on the front stretch.

Sheppard described the accident, “I thought our night was over when I almost ended up in the grandstands on that restart. I lost a bunch of positions and man, that was pretty scary. I couldn’t tell what happened up here. Everyone got bottled up on that restart. We gathered our thoughts back up and started picking away and held steady for a while. We found that bottom groove come in and we were pretty darn good after that.”

Later around the halfway point the No. 9s nearly ended up on its roof, “Then we just about tipped it over on the restart but we had 40 or 50 laps to gather ourselves and get it back up to the front.”

Acknowledging the massive Granby crowd Sheppard noted, “It feels good to be in Victory Lane again at Granby. I always love coming here and I always love racing here.”

Peter Britten finished in second place to take home $4,000. While disappointed in losing the lead and ultimately the race, Britten wasn’t beating himself up knowing he was passed by one of the greatest Big Block Modified drivers of all-time.

Britten said, “We started ninth, got to the lead, and got beaten by the best car that runs on the tour. It still sucks. I would have loved to have gotten the win for myself and Troyer and everybody that helps me out but second is a good result.”

Luckily for the Britten, the pileup occurred in his rearview mirror.

“It was a long race. It was exhausting. It’s always good to survive this race and to come out second, we’re pretty happy. I think it [the wreck] happened just behind me so I didn’t get a view of it. We sat on the back straightaway for what felt like an eternity.

Coming off his huge win at Autodrome Drummond, Erick Rudolph followed it up with a podium finish at Granby.

One thing is for certain, Rudolph loves Quebec: “Sheppard did an awesome job. He’s very fast. We got a win last night and third tonight so we’re all happy here. It was a really good trip for us and I’m looking forward to coming back to Quebec in September.”

Eleven cars were involved in the lap 29 crack up. Jimmy Phelps took the worst of it as his car went up on its side before getting hit on the underside and rolling onto his roof. Phelps and the rest of the drivers were uninjured. In fact, Billy Decker, whose car looked like it would be difficult to put back into the trailer, was able to pound out the dents and change to tires. Incredibly Decker drove back up to finish in fifth place.

Ryan Godown, whose car was on top of the pile, was able to take the green flag again as well. The Ringoes Rocket brought the car home in twelfth thanks to some speedy repairs.

Rookie of the Year contender Jack Lehner from Saratoga Springs, NY passed more cars than anyone making him the KSE Hard Charger Award winner. The driver of the No. 2L machine was involved in the eleven-car wreck on the front stretch, but his team thrashed on the car and got it back out on the track race-ready.

Gypsum Racing’s No. 99L Larry Wight took home an extra $100 with the Billy Whittaker Cars Fast-Time Award. Wight led the most laps but faded back to eighth place in the closing stages.

Next up for the Super DIRTcar Series is the Hall of Fame 100 at Weedsport Speedway on Sunday, July 28. The 100-lapper is $10,000-to-win and awards a coveted NAPA Super DIRT Week XLVIII Billy Whittaker Cars 200 guaranteed start.