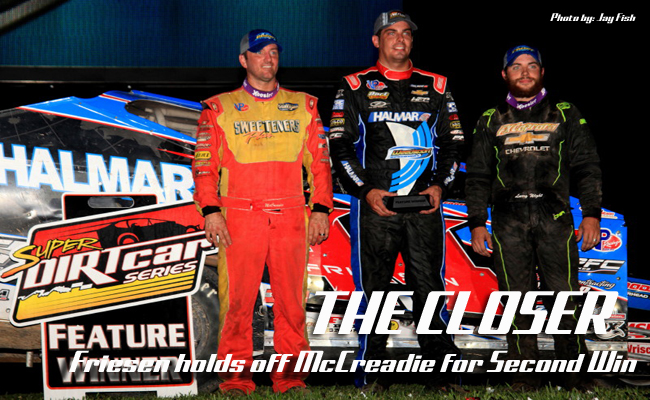 Friesen edges McCreadie by a Nose at Hall of Fame 100

WEEDSPORT, NY – July 11, 2017 – On a night that honored Northeast Dirt Modifieds new hall of famers, it was potentially two-future Hall of Famers that battled it out for 100-laps in the Hall of Fame 100 at Weedsport Speedway. Tim McCreadie and Stewart Friesen were the class of the field but in the end, it was Friesen who edged out McCreadie for his second Super DIRTcar Series win by a half-car length at the line and to come home $10,000-dollars richer.

Fittingly on the night after being inducted into the Hall of Fame, Alan Johnson and Steve Paine would roll off for the 100-lap Feature event side-by-side in the 10th-row. Johnson would bring home his No. 14J with a 14th-place finish while Paine, who was in the Matt Sheppard No. 7x came home with a 12th-place finish.

When the night kicked off, it was second-place in points, Billy Decker showing the way early by wrapping up the Pole Position Raceway Fast Qualifier award with a lap of 15.348-seconds. Decker would also go on to win his heat race. In the other three heat races, it was Brett Hearn, Eric Rudolph, Larry Wight making them eligible for the 811 Dig Safely redraw. Both Rich Scagliotta and Max McLaughlin drew the number 8 and 11 starting position, giving them the opportunity to take home a little extra cash with a win. The 811 Dig Safely award would not be awarded out as both drivers finished outside of the top-10.

Andrew Ferguson qualified for the Hall of Fame 100 at Weedsport Speedway by winning the Last Chance Qualifying race giving him the 21st-starting position in the 100-lap Feature event.

Up front for the Hall of Fame 100 it was Tim McCreadie and Peter Britten as the field took the green flag. McCreadie quickly rocketed out to the lead while Stewart Friesen jumped around Britten for the second spot.

On lap 15 the race saw its first yellow flag for the 98H of Jimmy Phelps who tagged the front stretch wall during a heated battle for fifth-place along with Britten, Decker, Wight. Phelps would head pit side only to return. Because of tonight’s hardship and 19th-place finish, Phelps took home the Speedy First Aid Hard Luck Award.

As the field got back under way, McCreadie once again jumped out to a lead showing the way over Friesen.

At the quarter-mark of the 100-lap Feature event, from the ninth-starting position, Lightning Larry Wight had worked his way all the way up into contention to fourth place and was quickly challenging for a spot on the podium.

“We were pretty good on the bottom in the beginning,” said Larry Wight who finished third in the Hall of Fame 100. “When the [bottom] went away we were just too tight but we were also too tight on the top. I kind of had to toss the car in but we were losing too much time getting into the corner. It kind of sheered my right-rear tire up and after that we were just kind of riding.”

While McCreadie was out front of the 31-car field, the leaders had to pick their way through lap traffic. With three distinct grooves to do so, it appeared as the top on the cushion was the place to be. McCreadie seemed to have the better car going through Turns 1 and 2, but Friesen would pull away around Turns 3 and 4.

“We were pretty even, [Friesen] would get away, I would run him down, it was kind of like a rubber band,” added McCreadie.

Just before the halfway mark of the 100-lap race, another yellow flag was displayed for a slowed No. 22 of Brandon Walters in Turn 2.

Choosing the inside lane on the lap 51 restart, Friesen got a run going down the back stretch and threw a perfectly executed slide job on McCreadie to get by the No. 39 for the lead.

“I just made a mistake on that restart,” said Tim McCreadie. “I should have taken the top but I went in there and slide for life and that was it, I saw the 44 the rest of the race. We were just cruising along pretty good. I was running along as hard as I could. I don’t know if Stewart was laying back but I only have one gear and that’s go as hard as I can. Hats off to those guys.”

Friesen wouldn’t be able to get too far out front as McCreadie and Wight were challenging for the top spot.

“We were just waiting for those guys to make a mistake and hope that we could get by [Friesen, McCreadie] but it’s not something you’re going to see those two do very often, said Larry Wight. “[Friesen and McCreadie] have been running up front for so many years.”

For the remaining laps of the Hall of Fame 100 the top-three ran within tenths of each other until a late-race yellow flag came out for the No. 109 of Billy Whittaker who was unable to make it off the track.

Setting up a green-white-checker finish, Friesen got another stellar restart on McCreadie. Both the No. 44 of Friesen would run the top-side and the No. 39 of McCreadie was running down low. The two came off Turn 4 for the final time side-by-side dragging racing to the checkers, it was Friesen who would just barely edge out McCreadie for his second win of the Super DIRTcar Series season. Larry Wight who won at Airborne Park Speedway came home with a podium finish in third.

“I honestly didn’t know the race way over with ‘cause I was trying to do the best I could and I thought we just got him but then I heard the race director came on the radio and I said, damn it,” said McCreadie.

“What a race, Timmy [McCreadie] got 10-grand from me a couple races ago, we got 10 from him tonight,” said Stewart Friesen. “What a great race team, pretty top-notice. We got a racing coming up. I’ve been wanting to win one at [Weedsport Speedway] since Al [Heinke] took over and they redid this place. What a great facility.”

The KSE Hard Charger in the Hall of Fame 100 was Gary Tompkins in the No. 84 who started in the 14th position and charged his way up to 7th-place finish.

The Super DIRTcar Series returns to action on Tuesday, July 18 and Wednesday, July 19 at Eldora Speedway for the Tuesday Night Tailgate and all-star race at the Eldora Dirt Derby alongside the NASCAR Camping World Truck Series. For additional event information and to purchase advanced reserved seating, please visit www.EldoraSpeedway.com.