[vc_row][vc_column][vc_column_text]Two nights at Atomic Speedway will present a stage like never before to set up the 2022 Super DIRTcar Series championship season opener.

It’s a story of big-profile drivers going for big awards in a season that’s presenting a new bigger championship purse – $200,000 overall. Atomic kicks off the quest for a championship worth $60,000 at the end of the year.

If you can’t make it to the track, you can watch all the action live on DIRTVision – either online or by downloading the DIRTVision App. Hot laps will begin at 6pm (ET) with racing scheduled for 7pm (ET).

Here are the top storylines to follow this weekend:

NINE GOES FOR NINE: After making history in 2021 by claiming his eighth Super DIRTcar Series title, Matt Sheppard, of Waterloo, NY, has his sights on securing a ninth title behind the wheel of his #9s Big Block. To do so, he’ll look to make history again by being the first Series winner at Atomic.

His results from the non-points season-opening events at Volusia Speedway Park may signal worry but experience overrules all misfortunes. He struggled to find speed in the first two races but after making wholesale changes raced his way back into the top-five on the third night. Bad luck plagued Sheppard the final two nights, forcing DNFs, but he was running upfront before it struck. 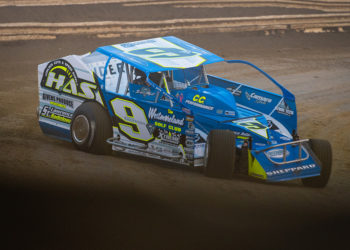 With a stout field of competitors this year, he’ll need a strong start at Atomic to put himself in position for a run at this ninth title.

EARLY HBR SURGE: Both Heinke-Baldwin Racing teammates entered the year with a new wealth of confidence. Rising-star Max McLaughlin, 22, of Mooresville, NC, returned to HBR – which gave him his first Super DIRTcar Series at 15 years old – this year, teaming him back up with veteran Jimmy Phelps, of Baldwinsville, NY, who enters his 26th year racing with the Series in 2022.

For McLaughlin, it was a return home and for Phelps, it was a welcomed reunion with someone he knew he could lean on for help. Their new team synergy showed during DIRTcar Nationals in February as McLaughlin won in only his third race back with the team and Phelps earned his first Series win since 2020. He also claimed his first DIRTcar Nationals Big Gator Championship.

Both will likely carry that momentum into Atomic as favorites to win again. Atomic is a high-banked 3/8-mile track, sharing some similarities to the high-banked Fulton Speedway which Phelps and McLaughlin have both had success at.

PAST OHIO VICTORS: The Super DIRTcar Series’ debut at Atomic Speedway will be its first-ever stop in central Ohio, but the Series has previously hosted eight races in the Buckeye State – six at Eldora Speedway and two at Sharon Speedway – in the last 10 years.

Merv Treichler won the first Series race in the state at Sharon in 1982, and, currently, Erick Rudolph is the last to have won in the Buckeye State with his 2019 win at Eldora Speedway.

Full-time Series competitors Peter Britten and Jimmy Phelps enter the weekend with the pride of having won in the state already. Phelps, already riding the high of winning in Florida this year, won at Sharon in 2016, and Britten, who also picked up a big win in Florida, won his first Super DIRTcar Series win at Sharon in 2017.

LOCAL HERO: While Big Block Modifieds have never raced at Atomic Speedway before, that’s not stopping the local flair from showing up. 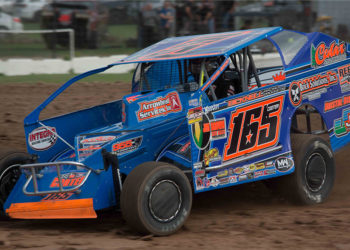 BRP Modified champion Rex King Jr., of Bristolville, OH, plans to join the competitive field to try and steal a home-state win. His best finish with the Series was fifth at Eldora in 2019.

While unconfirmed, other Ohio drivers who could make the trek to Ohio include his father Rex King and Rob Kristyak, also from Bristolville, OH.

However, he had a slow start to the 2021 season which kept him from contending for a second Super DIRTcar Series title. With a win already under his belt this year, he’ll look to keep that momentum rolling into Atomic to put himself in contention for the 2022 $60,000 championship title.

NEW CONTENDERS: With the new season comes an impressive group of new full-time drivers to the Super DIRTcar Series in 2022. 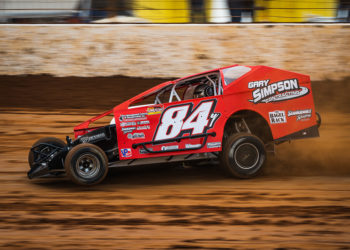 Perrego earned his first two Series wins in 2020 during OktoberFAST at Albany-Saratoga Speedway and Can-Am Speedway, driving the #44p. This year, he’ll be full-time behind the wheel of the iconic #4* for Vinny Salerno.

Of the group, Yankowski is the youngest at 17 years old, and still in his junior year of high school. However, he stunned the world during World Finals last year by outrunning Larry Wight and Mat Williamson to win at The Dirt Track at Charlotte in only his second Series start. He’s also yet to finish outside the top-10 in his three starts. Behind the wheel of his family-owned #84y, he’ll try to stun the world again at Atomic.

AROUND THE TURN:  The Super DIRTcar Series will make its first New York stop at Can-Am Speedway for the Thunder on the 1000 Islands on Saturday, April 9. For more information, CLICK HERE.