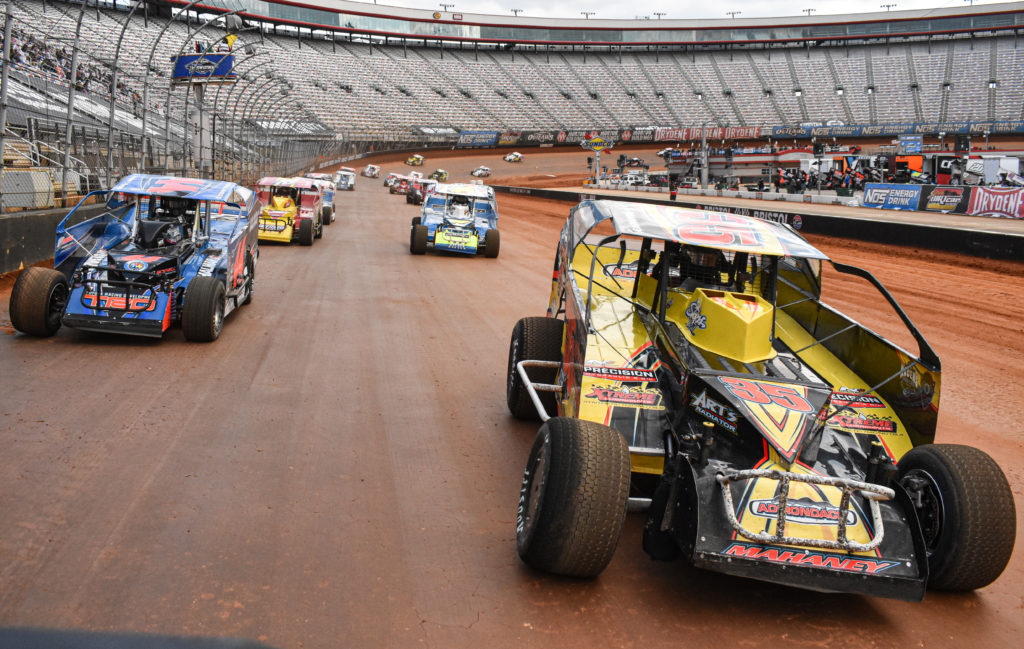 SWEDESBORO, NJ – On Tuesday, May 4 — aka Star Wars Day — the stars and cars of the Super DIRTcar Series will invade Bridgeport Speedway attempting to break the stranglehold Stewart Friesen has on the Big Block Modified universe in the King of the Big Blocks 100.

The sleek black-and-blue Halmar #44 has risen to the highest step on the podium in all three championship points races this season, starting with the Thunder in the Thousand Islands 100 at Can-Am Speedway and a historic sweep of the Bristol Throwdown at Bristol Motor Speedway.

It seems the Halmar juggernaut is unstoppable. A Dark Horse has been close, but still in Friesen’s Vader-esque shadow. Mike Mahaney and his trusty Huttig-owned Big Block has been in dogged pursuit of the #44 in every race.

With Friesen the Darth Vader of this saga, Mahaney has embraced the persona of a favorite scrappy, headstrong hero: Han Solo.

“I can relate a little more with Han Solo’s mechanical ability to keep the old Millennium Falcon ship up and running,” Mahaney said. “And make it go fast.”

Mahaney, of King Ferry, NY, has maintained pace with Friesen in every race, putting himself “on his six” in the standings. Many have pegged the pilot of the #35 as the chosen one to take Friesen down at Bridgeport.

He pulled two SRI Performance pole positions at Bristol Motor Speedway, but was unable to convert them into wins.

“We have shown that we can run with Friesen at times and sometimes ahead of him, but when it comes down to long runs at the end of the races his pace has stayed more consistent without falling off as much,” Mahaney noted of his battles at Bristol.

On the other side – the dark side perhaps – Friesen is closing in on Bridgeport with his sights set and engines at full power.

“I do feel like Darth Vader coming in right now,” Friesen said. “I mean I’m not a big Star Wars fan, but I’ll take it and keep going. We’re going to keep running the Series races until we can’t.”

Not only has he won the first three championship races but he also won the Series race at Bridgeport in 2020.

“The Halmar guys have been working really hard obviously with all the success,” Friesen noted. “It’s a well-oiled machine. This is my sixth year driving for Chris Larsen. Everything is rolling really smooth. We have a great notebook. We’ve been rolling along, had some good luck, made some great calls tire-wise, and that’s been it. Looking forward to Bridgeport.”

“Bridgeport is one of the more exciting tracks we go to with the new configuration,” said the driver of the #44 Halmar car. “I had the win there last year so we have some notes to go off of. Maybe we can tune it up and be a little bit better.”

Drivers are looking forward to going back to Bridgeport after a successful Bristol Throwdown weekend of racing at Bristol Motor Speedway.

“Just like Bristol, Bridgeport has a lot of banking, a lot of right-side load, so coming out of Bristol we’ll probably have some stuff to make our car even better,” Friesen said.

More than 35 entries are expected for the King of the Big Blocks 100. The race pays $10,000-to-win and rewards the winning driver with a guaranteed start in the Billy Whittaker Cars 200 at NAPA Super DIRT Week in October at Oswego Speedway.

The talent level of the Super DIRTcar Series puts it in a league of its own. On top of the full-time Series driver points is Mike Mahaney, who has two top fives and three top 10s so far in three Series races. Mahaney’s #35 is red hot coming off of a win at Albany-Saratoga Speedway in weekly racing competition. Coincidentally, Mahaney finished ahead of runner-up Billy Decker who is also one spot behind him in Series points.

“I agree that the talent level continues to rise and there are a lot of teams who can compete,” said Mahaney of the points picture. “I think it’s early for me to even look at points. I like that we are running well and up towards the top but we will continue to focus on trying to get our first Series win.”

After Decker in points is Matt Sheppard, Peter Britten, and Mat Williamson. That’s a lot of talent and wins to see in the rearview mirror.

Mike Gular, who was extremely fast at Bristol, will be on hand to try to take his first Series win. Drivers like Ryan Watt, Duane Howard, Ryan Godown, Jimmy Horton, Alex Yankowski, Dom Buffalino and more have made it known that they are ready to defend home territory.

Non-full-time Series regulars like Max McLaughlin, winner of the 2021 DIRTcar Nationals big gator trophy, Tim Sears Jr., who just picked up a DIRTcar 358 Modified win at Fulton and has looked strong in all Series races so far, plus Jordan McCreadie and Mike Maresca will also be strong contenders to watch for.

Race fans do not want to miss this ultimate clash of dirt modified worlds.

If you can’t make it to the track then be sure to pick up your DIRTvision FAST PASS for all the Super DIRTcar Series, World of Outlaws, and DIRTcar Racing action live.