This Week Ahead: Fuller Leads 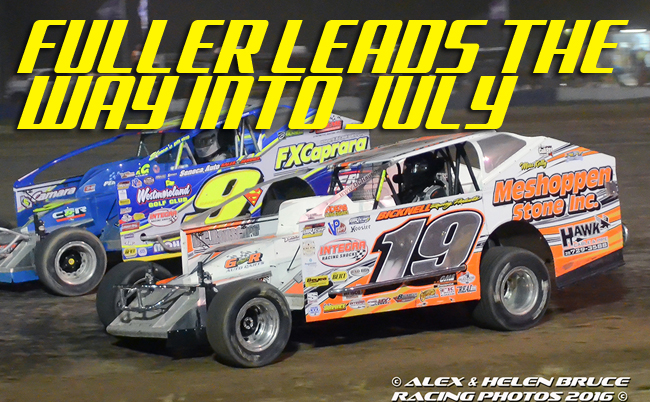 This Week Ahead: Fuller Leads the Way

WEEDSPORT, N.Y. – July 3, 2016 – The Super DIRTcar Series Big-Block Modifieds continue to roll into the busy month of July as the series tackles three races in the upcoming week.

Today, Sunday, July 3, the big blocks roll into Utica-Rome Speedway and then head east to take on Albany-Saratoga Speedway on Wednesday, July 6 for the previously rescheduled Brett Hearn’s ‘The Big Show 8’ before heading north to take on Mohawk Raceway on Thursday, July 7.

The still-young 2016 series has witnessed a hard fought battle as all four of the series full-points races have yet to have a repeat winner.

Heading into the three-day race week there are four teams that are within fifteen points of each other battling for the top spot. The current point leader, Tim Fuller, who has one Super DIRTcar Series win under his belt, heads to Utica-Rome with a seven-point lead over Matt Sheppard, eleven over Stewart Friesen, and fifteen over Billy Decker.

The Super DIRTcar Series will be taking on three tracks in the next five days.

Utica-Rome is the first track on the list for this upcoming week. Billy Decker picked up the win at the track in 2015. Decker currently sits fourth in the championship standings and has one series win on the year.

After Utica-Rome the series will be traveling to Albany-Saratoga for the postponed Brett Hearn’s Big Show 8 with Kenny Wallace on Wednesday. The eighth annual event makes its fifth appearance at Albany-Saratoga.

Then, on Thursday, Mohawk International Raceway will be the last stop of the week for the Super DIRTcar Series. Sheppard and Jimmy Phelps are both tied with three series wins at Mohawk. It was Billy Decker who took the checkered flag first there in 2015.

The season is now in full swing with a very busy July ahead. After this upcoming week the series will be at Five Mile Point and Grandview Speedway. The series then heads to Eldora Speedway to join the NASCAR truck series.

UTICA-ROME SPEEDWAY is a ½ mile, semi banked, clay oval. For more information and to learn how to purchase tickets, visit UticaRomeSpeedway.com

ALBANY-SARATOGA SPEEDWAY is a 4/10 mile semi-banked clay oval. For more information and to learn how to purchase tickets, visit BigShow8.com

MOHWAK INTERANTIONAL RACEWAY is a 3/8 mile dirt oval track. For more information and to learn how to purchase tickets, visit MohawkSpeedway.com

LIVE ONLINE UPDATES: Tune in to listen live for FREE to all the action at Utica-Rome, Albany-Saratoga and Mohawk International on the DIRTVision.com Radio Network.

2016 STAT ATTACK
There have been 4 Super DIRTcar Series features this season.