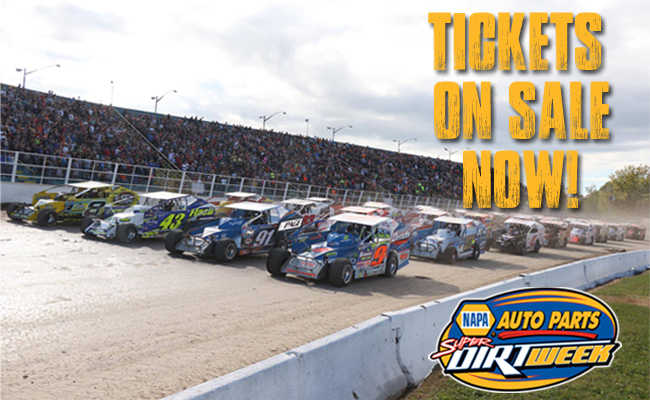 CONCORD, NC — Nov. 24, 2017 — NAPA Auto Parts Super DIRT Week at Oswego Speedway was abuzz when the five-day event came to a thrilling close last October with a bold last-lap pass that left fans wanting more. DIRTcar Racing is excited to give them just that in October of 2018. Tickets for Racing’s Biggest Party officially go on sale, online only, to the general public on Black Friday, Nov. 24.

In early September, the clay returned to the Steel Palace, transforming it into the Clay Palace for the annual crown-jewel five-day event that features the Super DIRTcar Series Big-Block Modifieds alongside the DIRTcar 358 Modifieds, Sportsman Modifieds and Pro Stocks.

Rob Yetman was once again the man to beat in the DIRTcar Pro Stock 75, starting out front and going on to grab his fifth straight NAPA Super DIRT Week victory. Dave Marcuccuilli picked up his second straight win in the Chevrolet Performance 75 Sportsman Modified feature to add to his stellar 2017 season.

When it came time for the granddaddy of all Big-Block Modified races, the crowd had settled into their soon to be unoccupied seats unsure of what they were about to witness.

In just over two hours’ time and 200 laps, everyone in attendance at Oswego Speedway for NAPA Super DIRT Week was treated to everything they could have wanted: drama, frustration, heartbreak and celebration. A classic superhero battle between “Super” Matt Sheppard and “Batman” Peter Britten brought the crowd to their feet as Sheppard made a bold move on Britten in the last lap to pick up his second NAPA Super DIRT Week victory.

Race fans all agree, last year’s NAPA Super DIRT Week certainly lived up to the hype. Fans coined it “one of the greatest events in recent history” across social channels. Fans that enjoyed or even missed the event this past October now have their chance to secure their place in the 47th running of NAPA Super DIRT Week, Oct. 3-7, 2018. Tickets go on sale to the public starting on Friday, Nov. 24 at 9 a.m., with online sales only until Monday, Nov. 27 8:30 a.m. EDT.