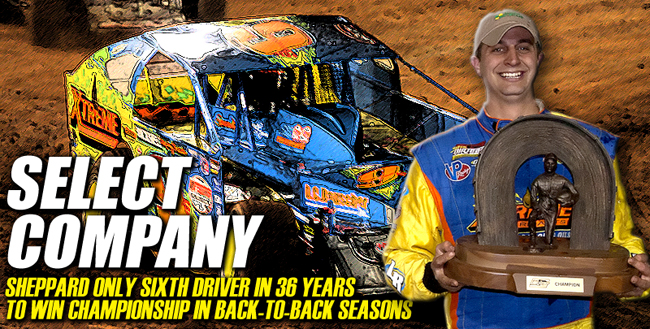 WEEDSPORT, NY – Nov. 14, 2011 – By Kevin Kovac/DIRTcar Racing PR – No one had to tell Matt Sheppard why his 2011 overall DIRTcar Big-Block Modified championship holds so much significance. That fact hit him head-on as soon as he glanced at the select list of drivers who preceded him as winners of DIRTcar Northeast’s most prestigious title in back-to-back seasons.

That’s pretty heady company for Sheppard, a DIRTcar Northeast circuit lifer from Waterloo, N.Y., who, at 29, is by far the youngest driver in history to win consecutive Big-Block titles.

“Those are the guys I grew up watching,” said Sheppard, who began attending DIRTcar races at an early age with his father, former driver Stu, and was a teenager when he debuted behind the wheel of a DIRTcar Sportsman. “They were like heroes to me. I never thought I’d be mentioned in the same breath as those guys.”

The awestruck Sheppard will receive his $36,650 check for winning the overall Big-Block Modified championship this Saturday (Nov. 19) during the annual DIRTcar Northeast ‘Night of Champions’ Awards Banquet at the Turning Stone Casino in Vernon, N.Y. Over $130,000 in points-fund awards will be distributed to the top 15 finishers in this year’s overall points standings, including an additional $1,650 to each driver from the pool of fines levied on Big-Block competitors in 2011.

“To be just the sixth guy to repeat – man, it’s just unbelievable,” continued Sheppard. “It’s really one of those things you have to let sink in. I didn’t realize it was that short of a list.

“When you look back, there have been a lot of guys who have had dominant years (in the DIRTcar Big-Block Modified division) but it’s still been tough for them to string together championships. It says a lot for the division and how competitive the Super DIRT Series is when only six guys have won it two years in a row and no one has done it three years in a row.”

Sheppard recognized just how difficult it is to repeat in 2011. He appeared primed to cruise to the title for the second consecutive year when he carried a healthy 46-point lead over Decker into the division’s marquee event, the SEF Small Engines Fuels 200 presented by Ferris & Snapper on Oct. 9 at the one-mile New York State Fairgrounds in Syracuse, N.Y., but a 29th-place finish thanks to his lone DNF of the 15-race Super DIRTcar Series (broken hub) pushed him back to second in the standings.

Suddenly facing a 48-point deficit to Decker with just three races remaining on the schedule, Sheppard found himself in trouble. His dreams seemed to be further slipping away when he struggled during qualifying for the next event, the Eastern States 200 on Oct. 23 at Orange County Fair Speedway in Middletown, N.Y., and became saddled with the 35th starting spot for the 50th annual race. But Sheppard scraped out a critical fourth-place finish – one spot behind Decker – that kept him in the championship hunt entering the season-ending Lowes Foods World Finals doubleheader on Nov. 3-5 at The Dirt Track at Charlotte in Concord, N.C.

“Syracuse could’ve lost it for us, but Eastern States got us back and, in the end, pretty much won it for us,” said Sheppard, who left Orange County trailing Decker by 53 points in the overall standings that are determined using a combination of drivers’ hometrack bonus points and those earned in Super DIRTcar Series events. “We started deep at Eastern States and worked our way through the field really good, and then we got a flat tire and had to fight our way back again. We were like 20th with about 20 laps to go – how we came out of there with a fourth, I’ll never know.

“But that’s what kept us close enough to have a shot at the title. We came through with a top-five when we absolutely needed one.”

One year after taking a 74-point lead into the World Finals and calmly holding on to beat Jimmy Phelps of Baldwinsville, N.Y., by 59 markers, Sheppard played the role of pursuer. As a result, he brought a different mindset to the four-tenths-mile oval.

“It was kind of the complete opposite of last year for us,” said Sheppard, who drives CC Performance-powered Bicknell cars for team owner Jeff Brownell Sr. “Last year we were trying to protect the (points) lead, so we just wanted to go down there and run solid. We were kind of in conserve mode all weekend. This year we knew we had to go down and run really good all weekend and have a little bit of help from Billy to have any shot at it.”

And “that’s exactly what happened,” said Sheppard. In Friday night’s 40-lap feature at The Dirt Track, Sheppard finished second while Decker switched to a backup car after losing an engine in hot laps and struggled to a 13th-place finish, vaulting Sheppard back atop the standings by 10 points. Another runner-up finish in Saturday evening’s 40-lapper allowed Sheppard to win the title by 15 points over Decker, who followed Sheppard under the checkered flag in third place.

It was very nearly a perfect World Finals for Sheppard, who set fast time and won a heat race for both Big-Block programs to earn crucial qualifying bonus points. He also led both features before being overtaken by Tim McCreadie of Watertown, N.Y., who swept the twinbill, but the driver known as ‘Super Matt’ had no qualms about being shut out of Victory Lane.

“We definitely ran harder this year (at the World Finals),” said Sheppard, whose 2011 Super DIRTcar Series results show four wins (at New York’s Rolling Wheels Raceway Park and Canada’s Autodrome Granby, Autodrome Drummond and Merrittville Speedway), 11 top-five and 14 top-10 finishes. “We were really good all weekend and I ran the wheels off it. Even after Timmy got by me (for the lead) on Saturday night I still ran hard because I didn’t want anybody else to get by.”

The championship capped another spectacular season for Sheppard, whose performance over the past three years has certified him as a Big-Block star. His annual feature win totals (21 in ’09, 22 in ’10 and 21 in 11) are unmatched by any other Modified driver, and the graduate of the Rochester Institute of Technology has been collecting enough purse and points-fund awards to keep him driving Big-Block Modifieds for a living.

Sheppard, who earned his DIRTcar hometrack bonus points this season by winning the championship at Canandaigua (N.Y.) Speedway, will take home $46,650 in cash plus another $5,000 in VP Racing Fuels vouchers from Saturday’s Awards Banquet. That total includes the $10,000 in cash and over $2,500 in contingencies he is due for winning the Safety-Kleen Mr. DIRTcar Big-Block Modified championship, a new-for-2011 weekly-racing program that awarded drivers points for their best 16 finishes at their DIRTcar-sanctioned hometracks.

“We’ve definitely had a great three-year stretch,” said Sheppard, who lost the 2009 overall DIRTcar Big-Block Modified title by a mere four points to Brett Hearn. “We’re looking forward to making it four successful years in a row. We’d love to be the first to win the (overall) championship three years in a row.”

For more information on the Super DIRTcar Series, visit www.SuperDirtCarSeries.com.