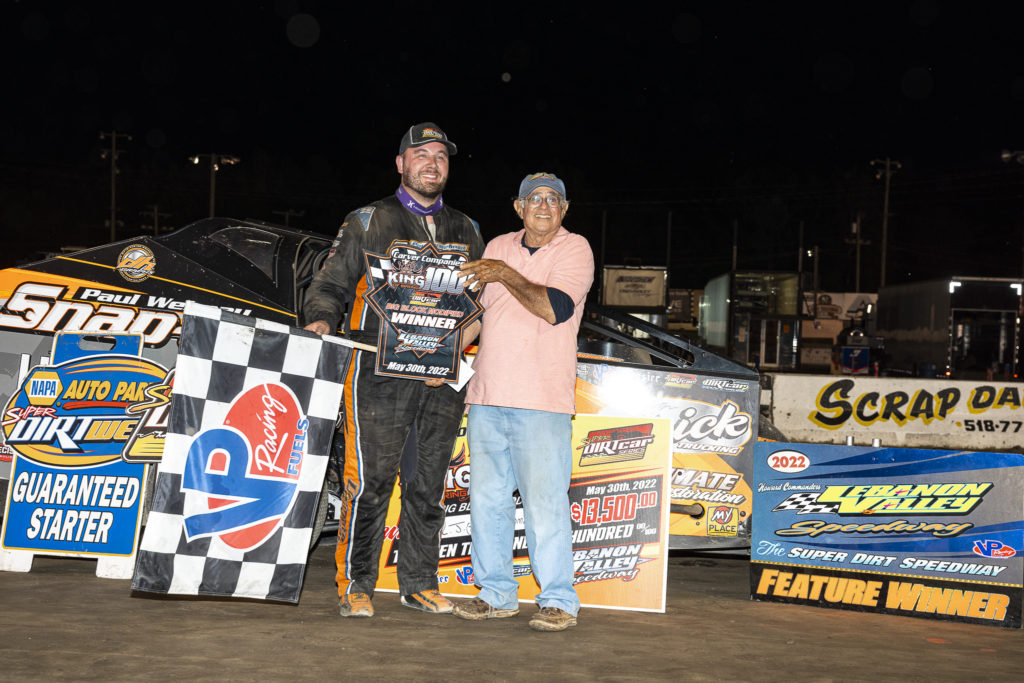 The plan for LJ Lombardo going into this season was to compete in Super DIRTcar Series events as much as his schedule and finances permitted, and that was it.

His first Series victory on Memorial Day has since added the biggest event of the season to his schedule.

October 3-9 now sits circled on his calendar as he plans a return to Oswego Speedway for the 50th NAPA Super DIRT Week. His only other appearance in the famed event came in 2019 behind the wheel of a DIRTcar 358 Modified. This year, he’ll make his Super DIRT Week debut with the Big Blocks.

Lombardo habitually competes in the Eastern States Weekend event at Orange County Fair Speedway in Middletown, NY, which takes place the second half of October. He also sets his sights on running in the World of Outlaws World Finals in Charlotte, NC, the first week in November, as most drivers do to close out the season. But a month straight of racing did not seem wise nor plausible.

All of that changed when Lombardo crossed the finish line first in Lebanon Valley Speedway’s King of Spring 100 last Monday. Accompanying the $13,500 payday, Lombardo was granted an automatic starting spot in the Billy Whittaker Cars 200 at NAPA Super Dirt Week.

Even after having a week to process his accomplishment and what it meant, he still never tires of talking about the magical night.

“It never gets old being asked that,” Lombardo said, when asked about what it meant to him to win a Super DIRTcar Series event in front of his home crowd. “I remember being a little kid watching races in the stands and saying I want to win a race, but you don’t always think you could do it, until it sinks in that you’ve actually done it. I didn’t even think I could.”

Now that Lombardo has been pleasantly forced to rethink his next steps, the next place he will have a chance to showcase his emerging potential against the top Big Block Modified drivers in the Super DIRTcar Series drivers is June 24 at Albany-Saratoga Speedway in Malta, NY. What comes after that remains to be seen as Lombardo is taking Super DIRTcar Series racing one step at a time.

“Like anyone else, it’s a financial thing and a time thing,” he said. “We’re going to race at Albany-Saratoga and see what happens after that.”

A welcomed addition to his program that will be joining him on the road is a new backup car identical to his primary car. That spare powerhouse will allow him to withstand longer races, demanding track conditions, and a higher frequency of competition, which could be a game-changer during the second half of the season.

Catch Lombardo in his second duel of the season against the Super DIRTcar Series stars in just over two weeks at Albany-Saratoga Speedway on Friday, June 24. If you can’t be at the track, stream all the action live on DIRTVision.