To see results as they become available, CLICK HERE.

7:00 p.m. Rich Laubach, from Hellertown, Penn, made overall fast time in hot laps today with a lap of 17.820 seconds. Billy Vaninwegen, Danny Johnson, and Alan Johnson also made the fastest times in their respective heat groups and will start at the front row of their qualifying heats.

Drivers will run timed hot laps in their assinged groups. The time of each driver’s fastest lap will then be used to order each group for qualifying heats, with the fastest hot lapper starting in the front.

Fans voted for their favorite Super DIRTcar Series drivers to compete in tonight’s six-pack challenge. Six drivers will race immediately after opening ceremonies, around 7:30. The winnings? A six-pack of brews! Stay posted for roster and results.

Hearn, Clair getting ready to roll

Brett Hearn and Mario Clair, both of whom were involved in a multiple-car collision last night, are both getting their cars ready for tonight’s racing.

“He zigged when I thought he’d zag,” Hearn said about the cause of the pileup. Hearn was behind Justin Haers and expected him to take the outside, but when he steered further inside off the restart,  Hearn collided and spun. “There was nowhere for me to go,” he said.

Hearn’s crew has been working on the 20 Teo since early this afternoon and he said he hopes to race the same car as last night. 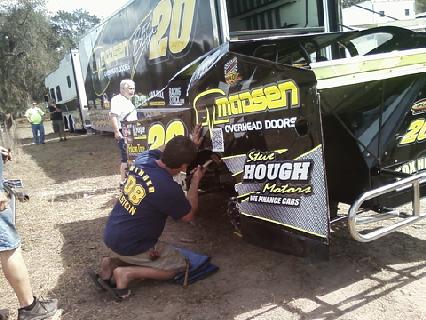 Several cars behind Hearn were also involved in last night’s collision. Among those involved, the 22c was one of the few able to continue racing. Clair took the 22c to eleventh place by the end of the 30-lapper.

Clair’s crew was also confident about their ability to fix up the car before the racing starts. The popular Quebecois has been racing strong during UNOH DIRTcar Nationals presented by Summit Racing Equipment, but has not yet had a win this week.

1:30 p.m. Below are the cars expected to compete tonight (entries subject to change). Have any pictures from UNOH DIRTcar Nationals presented by Summit Racing Equipment? Tweet to @SuperDIRTcar with #FLinFeb!