Billy Dunn and his father, Norm, took on the task of restarting their own team last year. With a limited budget and few helping hands, running a Series tour was unlikely.

However, they tried anyway. And they succeeded.

By the end of the year, they claimed the DIRTcar 358 Modified title and the pole for the prestigious DIRTcar 358 Salute to the Troops 150 at NAPA Super DIRT Week. So, now, with momentum on their side, they’re looking for more.

“We got two cars again now,” said Dunn, of Watertown, NY. “We still have a Big Block engine that is practically brand new. We just haven’t run it in three or four years. My ultimate goal would be to be back on the Big Block tour full-time. I know realistically, being a self-funded team that would be pretty hard. But maybe be able to run the first couple (Super DIRTcar Series) races and see where we’re at.”

The Super DIRTcar Series championship season will kick off at Can-Am Speedway – Dunn’s home track – on Saturday, April 9 for the Thunder on the 1000 Islands. Along with planning to run his #49 Small Block Modified weekly at the LaFargeville facility, Dunn said he’ll throw his Big Block motor in for the Super DIRTcar Series race, as well.

“The Big Block race at Can-Am is one I always look forward to,” Dunn said. “It’s our home track. We’ve won some pretty big races at Can-Am, some Big Block races. We’ve never won a tour race there so that is definitely one I’d really like to get.”

After driving for various teams throughout the past years, Dunn made the decision to run his own team again for 2021. To do so, he and his dad essentially had to start from scratch. They bought a used Bicknell car to start off the year with while building a new car during the summer that they finished off the year with.

They finished second in the 358 Modified Hoosier Racing Tire Weekly Championship standings with seven wins and won the DIRTcar 358 Modified title with two wins. However, to secure the title, Dunn had to use every ounce of grit and determination he had.

After getting involved in a wreck that mangled his car, he decided to try and still finish the race with what he had to secure the title. His team replaced whatever they could and ripped off the whole outside body of his Modified, revealing the inner skeleton of the car.

Even without the downforce from the body panels, Dunn was able to stay on the lead lap and finish 11th, securing his DIRTcar 358 Modified title.

“I’m not sure if it was the smartest thing or not,” Dunn said with a chuckle. “We knew the points were pretty close. All we had to do was finish the race at that point. I really wanted to just make a couple laps to make sure I was ahead of all the cars that dropped out in that wreck. Really other than the body, the car wasn’t that bad. It didn’t drive horrible. There were only a handful of laps left, so I tried to stay on the lead lap and finish it out. 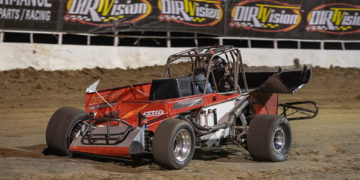 “We’re just a small family-run team (with support from his wife, Moriah, crew members, and sponsors Intergrow Greenhouses, Bicknell Racing Products and Integra Racing Shocks). Having our own deal back together again, it was nice to win that.”

With a new car for the Small Block tour this year, Dunn is confident he can defend his title. However, he acknowledged that with the short schedule – nine Series races from April to October – there’s no room for error.

For now, he’s going to cherish the accomplishment and look forward to battling with the Super DIRTcar Series at the track he grew up at.

“Can-Am was the premier 358 track for dirt while I was growing up,” Dunn said. “Means a lot to me to bring a 358 title back to Can-Am after growing up watching some of dirt’s best 358 drivers weekly.”

For more information on the Super DIRTcar Series Thunder on the 1000 Islands at Can-Am Speedway, CLICK HERE. And for the full 2022 DIRTcar 358 Modified schedule, CLICK HERE.

If you can’t make it to the track, you can watch every Super DIRTcar Series race live on DIRTVision – either online or by downloading the DIRTVision App.[/vc_column_text][/vc_column][/vc_row]

PrevPreviousOpen Red: Credentials Denied Episode 4
NextThunder on the 1000 Islands at Can-Am Speedway postponed to May 18Next