MIDDLETOWN, N.Y. – October 27, 2014 – Brett “the Jet” Hearn has been making a habit of winning at Orange County Fair Speedway. He picked up his 11th career Eastern States Big Block Modified victory there Sunday, October 26, his third in a row. (CLICK HERE FOR FULL RACE REPORT)

SYRACUSE, N.Y. (Oct. 12, 2014) — Stewart Friesen, a native of Niagara-on-the-Lake, Ont., now living in Sprakers, N.Y., passed Matt Sheppard of Waterloo, N.Y., for the lead on lap 190 and marched on to record his third career Syracuse 200 victory on Sunday at the New York State Fairgrounds. (CLICK HERE FOR FULL RACE REPORT) 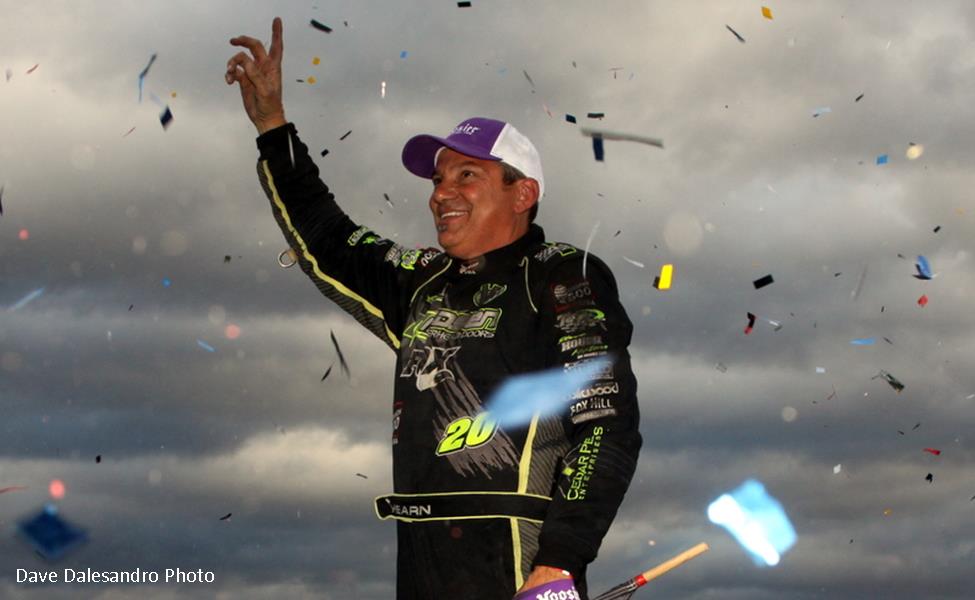 MIDDLETOWN, N.Y. – October 27, 2014 – Brett “the Jet” Hearn has been making a habit of winning at Orange County Fair Speedway. He picked up his 11th career Eastern States Big Block Modified victory there Sunday, October 26, his third in a row.

“It takes a lot of people to make this happen,” the Sussex, N.J. said in Victory Lane after Sunday’s 200 lapper. “There’s a lot of hard work, a lot of preparation goes into this thing and you come here on race day and try to put it all together.”

WEEDSPORT, N.Y. – October 20, 2014 – There’s no question as to which Modified driver has been dominant at Orange County Fair Speedway’s annual Eastern States Weekend. Brett Hearn, of Sussex, N.J., has picked up 13 Super DIRTcar Big Block Modified Series victories at the Middletown, N.Y., track, ten in the Eastern States 200. This year, the two-time consecutive Eastern States 200 Champion is looking to make it three in a row. 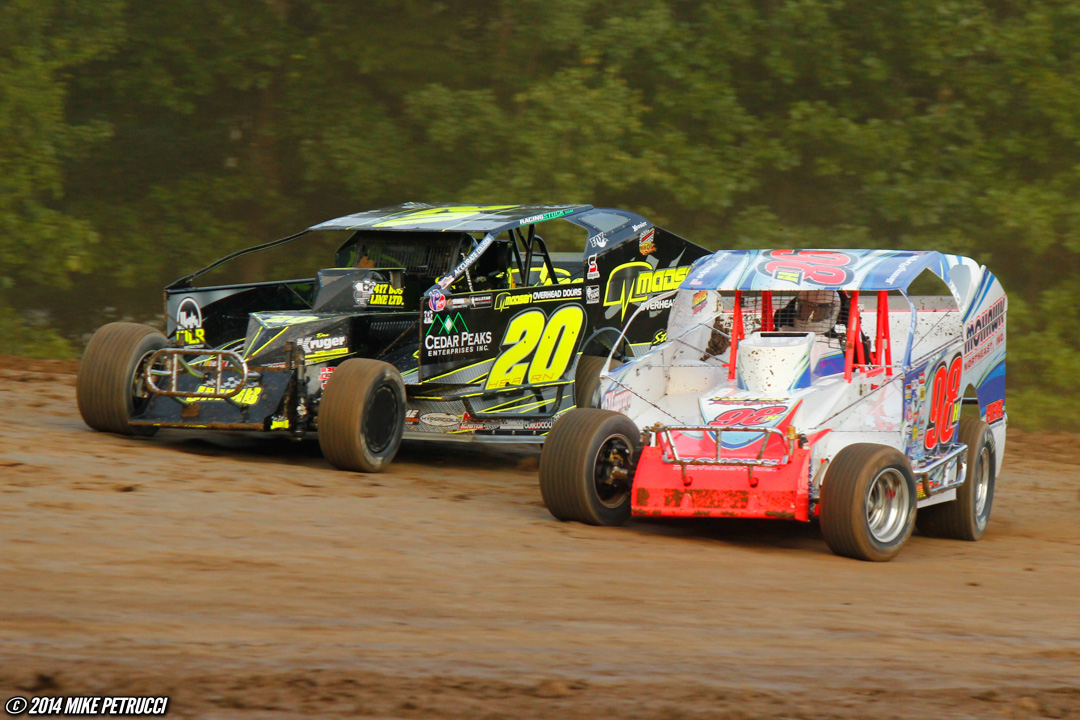 After shattering the Lebanon Valley Speedway lap time record, fast laps have started to become a habit for “the Jet.” He was second overall at Fonda Speedway in September and earned the Pole Position Raceway Fast Qualifier Award at Brockville Ontario Speedway in October. During NAPA Auto Parts Super DIRT Week XLIII in Syracuse, Hearn claimed the outside pole starting position with the second fastest lap time, short of fast-timer Matt Sheppard by a margin of 0.002 seconds.

“I think we have some really good cars, I think it’s going good. It’s still 200 laps, so, anything can happen,” said Hearn, who hopes running in Saturday’s 358-Modified race at Orange County Fair Speedway will help the Madsen Motorsports No. 20 team stay strong for Sunday. “The track is in pretty nice shape. We’re going to have to run the small block race and try to come up with a strategy for Sunday that’s going to work.” 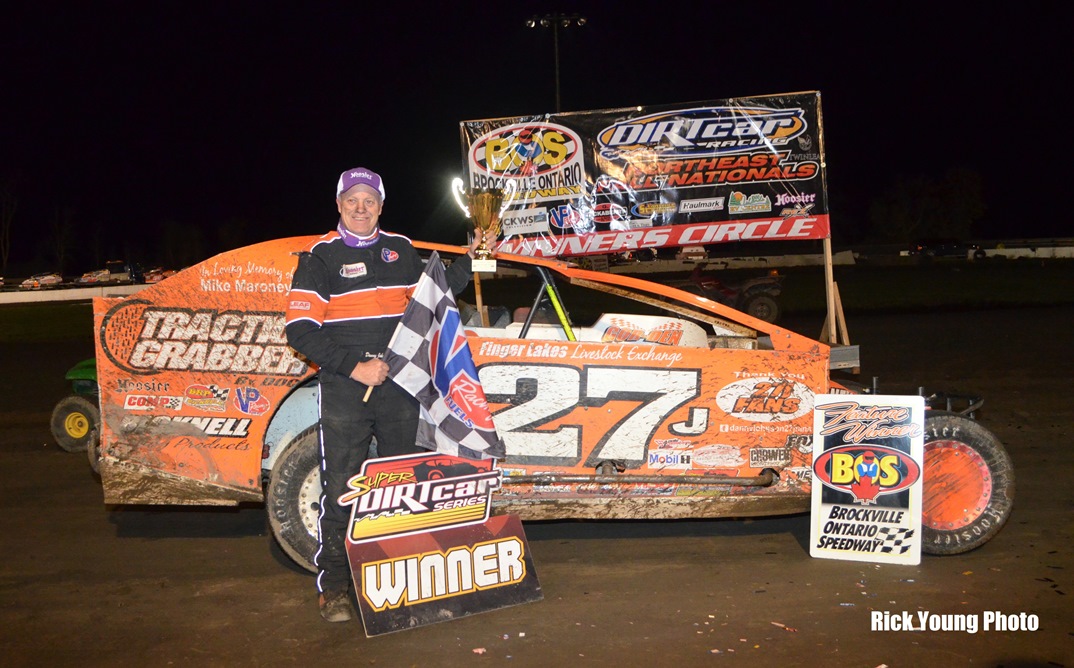 “It’s a fantastic track for us. It’s really working really well for us,” said Johnson, whose victory Saturday was his fourth Super DIRTcar Series win of 2014. “I just had a great hot rod. The car is two years old and it’s just a great running car for us.”

The Rochester, N.Y., driver started on the pole, but it was local runner Brian MacDonald, of Cornwall, Ontario, who took the lead at the green flag. Johnson stayed at his tail and reclaimed the position off a lap-29 restart. MacDonald refused to let up, staying at Johnson’s rear bumper the remaining 71 laps, but wasn’t able to make the pass.

But to secure his third career victory in the division’s most prestigious race on Sunday, Friesen just put his foot to the floor and tossed his car around the historic one-mile oval like he was blasting around a quarter-mile bullring.

Fortunately, the day ended on a high note, as Susice charged from the rear of a 24-car field to score a dramatic win at Rolling Wheels Raceway Park. Saturday’s Big Block Modified Win and You’re In victory put Susice back on track, giving him a starting spot for the biggest race of his career.

“This whole weekend has been a whirlwind for us,” commented Susice, who was ecstatic to have joined the Syracuse 200 field. “I don’t even know how to begin to express it. I never thought in a million years I’d be here. We couldn’t do it financially for our small block cars, and I’ve only run a Big Block a few times.”

Hearn joined Heinke-Baldwin Racing teammates Sheppard and Phelps in scoring wire-to-wire $4,000 wins from the pole position. The trio will occupy the top three starting spots in Sunday’s Syracuse 200 with Hearn sandwiched by the polesitting Sheppard and Phelps in the grand finale of NAPA Auto Parts Super DIRT Week XLIII.