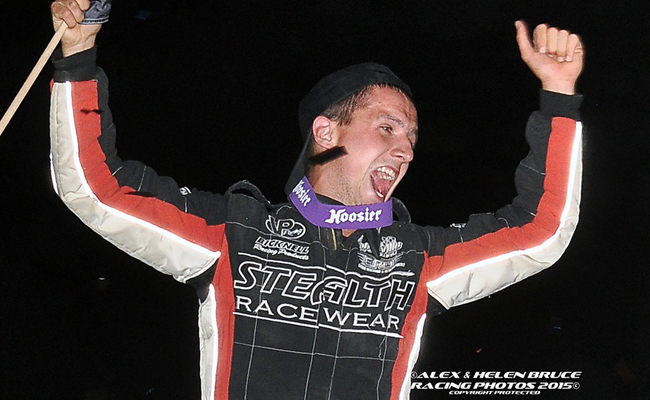 Thorold, ON – August 3, 2015 – Local favorite Mat Williamson of St. Catharines, Ontario weaved through heavy lapped traffic in pursuit of Matt Sheppard, took the lead from him on lap 56 and went on to his first-ever Super DIRTcar Series win Monday at Merrittville Speedway.

Williamson, driving the S&W Service Center No. 6, held off runner-up Brett Hearn on a restart with 22 laps to go and drove off to victory. Sheppard withstood a determined challenge by Stewart Friesen to claim third place and retain the Series point lead. Mike Bowman, another Merrittville regular, rallied late to finish 5th.

After taking over the second spot from Hearn at the halfway point, Williamson closed quickly on Sheppard, who was reaching the rear of the field. By lap 70, the track was slicking up, Hearn was running in second, Sheppard was coming under attack from Stewart Friesen and Mike Bowman (5th) was making a late rush top side.

The yellow was out after a spin by Jimmy Phelps on lap 78, but Williamson was unfazed at having lost a straightaway lead.

“This is awesome to win on home soil,” Williamson said. “I’m glad we could keep it local. “We’re going to tear this place up.”

Sheppard retained the series point lead with his 3rd-place effort. His closest competitor at the start of the night, 2014 Series champion Billy Decker placed 14th.

“I tried to get some momentum off the top on the restart,” Hearn said. “We’re trying to get back in the points race. Now it’s August and everybody’s tongue is hanging out, but we’re after it.”