BARBERVILLE, FL – When the sun rose and heated up the Florida air this morning, only 50 laps on The World’s Fastest Half-Mile were all that separated Gypsum Racing’s Larry Wight from his third DIRTcar Nationals presented by Bozard Ford Big Gator Championship.

Wight needed to finish fifteenth or better to prevent teammate Billy Decker from taking it for himself. Fortunately for the No. 99L, Wight finished sixth sandwiched between Decker in fifth and his other teammate Pat Ward in

Championships are often won in the shop as well as the race track and the Gypsum Racing team knows that well.

“It’s a combination of good preparation, a good car, a good motor, and a phenomenal crew. Having a family to back that up and allow us to put in the hours and put in the time at the track and come down here,” noted Wight.

The Super DIRTcar Series pounded the Florida clay five nights in a row and the track was different every night, which created challenging and dynamic racing.

“The track threw us for a loop tonight. We didn’t think it would get as slick,” said Wight, of Phoenix, NY. “We thought the top would be a little bit better so we tried to get the car freed up versus last night. I guess we should have left it a little bit snugger.”

Wight hopes he can bring home momentum and race data to Can-Am Speedway to start another run at the Super DIRTcar Series championship. 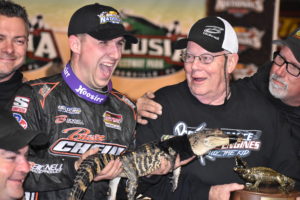 The race for the Big Gator championship probably would have come down to Wight and Williamson had the No. 88 not suffered a broken left rear shock, which resulted in a 15th place finish for the defending Series champion.

“That Buzz Chew Chevrolet was pretty good. I think everyone in our pit area was disappointed with what happened Thursday night,” said Williamson, of St. Catharines, ON. “It just made us work harder and show everyone what we’re made of.”

Only Williamson and Wight found Victory Lane at this year’s DIRTcar Nationals. Williamson’s broken shock on Thursday and the Gypsum team’s dominance tipped the championship scales in Wight’s favor.

“That’s what championships are made of,” Williamson said. “Hats off to Larry [Wight] and his guys, they had a solid week. We tried our best and couldn’t beat them. It goes to show how good they are,” Williamson said.

The Buzz Chew Racing team struggled at the DIRTcar Nationals in 2019. They’ve been bound and determined to come back and succeed at Volusia. Bookending the week with wins and competing for the overall points title felt like redemption. 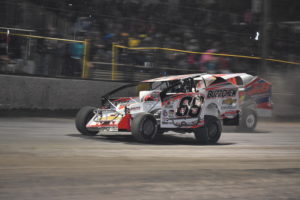 Runner up Jimmy Phelps and his HBR crew worked hard all week on their new Bicknell chassis and set up package.

“This is a new program for us with the chassis and coil-over suspension. We came down here with some stuff in mind that we wanted to play with,” said Phelps. “We got ourselves a little off track Wednesday and Thursday. It took until Thursday or me personally to figure out where I wanted to be on the race track. A top 5 last night and a podium tonight, we’re pretty happy with our progress.”

The Baldwinsville Bandit went on to say: “We learned a lot. We got beat by the hottest guy on dirt right now. There’s nothing to hang our heads about. We learned a ton that we can take back north with us.

Another driver with early-week woes was the seven-time Super DIRTcar Series champion Matt Sheppard. The driver from Waterloo, NY recorded finishes uncharacteristically down the order throughout the week but showed improvement every single night.

“We had a really good car tonight. We’ve been chasing this thing all week and we made a big stride tonight. We had a good car all night. Track position was very key,” said Sheppard.

And of course, there’s the part that no one from the northeast is looking forward to.

“Now we make the long trip home back to the snow.”

Brett Hearn knows the fast way around Volusia Speedway Park. In fact, The Jet holds the record for consecutive victories with 5 at the Florida oval. Tonight Hearn picked up 12 positions to finish eleventh from twenty-third.

Next up, the Series first points race takes place on Saturday, April 11 at Can-Am Speedway in Lafargville, NY for a $7,500-to-win 100-lap Feature.