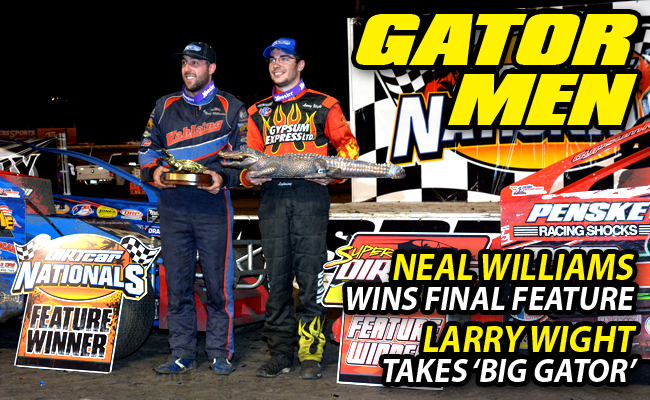 Williams a Surprise Winner of DIRTcar Nationals Finale at Volusia

Wight survives wild night to get his first Big Gator

BARBERVILLE, Fla. – Feb. 21, 2015 – Neal Williams shocked a capacity DIRTcar Nationals crowd on Saturday night by pulling off the upset win in the 50-lap Super DIRTcar Series Big-Block Modified finale at Volusia Speedway Park. It was the biggest win of the Pittsgrove, N.J., driver’s career as he pocketed the $5,000 check and picked up his first Gator trophy.

“This is just unreal,” Williams said. “To get my first Super DIRTcar series win down here against these boys is unbelievable.”

Larry Wight had to go to a backup car prior to the feature, but he survived to finish in the seventh spot outlasting both Matt Sheppard and Stewart Friesen to win his first ever DIRTcar Nationals Big-Block Modified week championship and the coveted ‘Big Gator.’

“We had to bring the backup car out because we had some motor trouble in the heat race,” Wight said. “We didn’t want to risk hurting it any worse. We started in the back again and had a great car. Maybe if we started in the top 20 we could have won it. Neal (Williams) had a great car, I could see it. He was able to hold his own.”

Sheppard and Friesen redrew the front row for the final night of the Nationals. Sheppard jumped out in front at the green and led the first circuit. Before a second lap could be completed, the red flag was shown as Tyler Dippel and Rick Laubach got together coming down the frontstretch.

Over the next four laps a series of cautions slowed the pace of the feature. All the while, Sheppard was able to control the action at the front. Friesen was forced pit-side under one of the cautions periods after packing the right-rear wheel full of mud. After a few more green flag laps were run, Erick Rudolph slowed in turn four bringing out yet another yellow on lap nine.

When the race got back up to speed, Sheppard made it through turns one and two before he was forced to shut the car down in turn three with mechanical issues. Sheppard’s bad luck and the subsequent caution handed the lead over to sixth-place starter Billy Pauch. Pauch, of Frenchtown, N.J., remained in front when the green flag got the race going once more.

When Pauch got back on the gas he was forced to deal with the challenges of fellow Garden State driver Williams. Williams, who started 10th, applied heavy pressure to Pauch over the next five laps. Williams nosed in front several times but each time Pauch was able to drive back by to remain out in front. At the halfway it was Pauch and Williams battling for the lead.

The traffic got thicker and thicker for Pauch which allowed Williams to stay with the veteran driver. Williams kept looking and waiting for his opportunity to get by Pauch and it came on lap 36. Williams worked by Pauch on the bottom of the second turn, taking the lead. He remained the leader as they reached the line. Yan Bussiere brought out the caution before another lap could be scored.

“Everyone talks about being in second when you reach lapped traffic and I just put that in my brain and it paid off,” Williams said. “He (Pauch) made a couple mistakes and we were able to capitalize.”

The field lined up nose to tail for the restart giving Williams a clear track in front of him. He moved out on Pauch as he had his hands full with Danny Johnson. One more lap clicked off before the final caution of the race was shown for Friesen who found himself nosed into the outside wall off of turn two after an unsuccessful attempt at a slide-job to get by Wight.

Williams was perfect on the ensuing restart and pulled away from Pauch and Johnson on the outside as they renewed their battle for second. Johnson worked low while Pauch worked high. Johnson dispatched of Pauch after two laps and set his eyes on Williams who already had amassed a half-straightaway lead.

“Once I got out in front I knew I had to just stay smooth and consistent,” Williams said. “I didn’t have any wheel spin, the car was on rails and I was able to pull away.”

Over the final ten laps Williams worked some slower traffic but never made a mistake on his way to triumph in front of the capacity crowd at the ‘World’s Fastest Half-Mile.’ Johnson ultimately brought his Chris Gennarelli-owned Bicknell to the line in the second spot at the checkered flag.

“My car was really tight,” Johnson said. “I setup for a smooth, slippery race track and it got choppy. It was scary going in there a couple times because I didn’t know if I was going to hit the fence or not. I didn’t want to do that. I had to be gingerly going in there. We are happy to come out with a second place finish.”

Pauch fell back to third in the final rundown after leading much of the first half of the race. It was the best finish for Pauch with his Bicknell No. 1 ride during the DIRTcar Nationals.

“I don’t know if the tires sealed up or what,” Pauch said. “Neal (Williams) had the car to beat tonight. He was good in the slick and up on the cushion so I have to hand it to him. We wanted to win tonight, but we’ll go home with a third. It’s tough when you come down here and race with these guys, there is no cherry-picking, it’s a tough bunch. I’m proud to finish third with them.”

Tim Fuller picked up a fourth place finish with his D.C. Rauscher Motorsports Bicknell and Quebec native, Mario Clair, worked by Brett Hearn in the late stages of the race to finish in the fifth position.

The Super DIRTcar Series stars return to action on April 25 at the Fulton Speedway. To keep up with the latest news about the series visit the website at www.superdirtcarseries.com or following along on Twitter at http://www.Twitter.com/SuperDIRTcar.