BARBERVILLE, FL – February 12, 2020 – Brett “The Jet” Hearn started on the pole, but it was Larry Wight, from Phoenix, NY, who lit the afterburners and squeezed between the No. 20 and the front stretch wall for the victory.

The defending DIRTcar Nationals presented by Bozard Ford champion is white-hot at The World’s Fastest Half-Mile Volusia Speedway Park. The No. 99 Gypsum Racing Big Block Modified has now graced Victory Lane at Volusia two out of the last four races at the speedway. 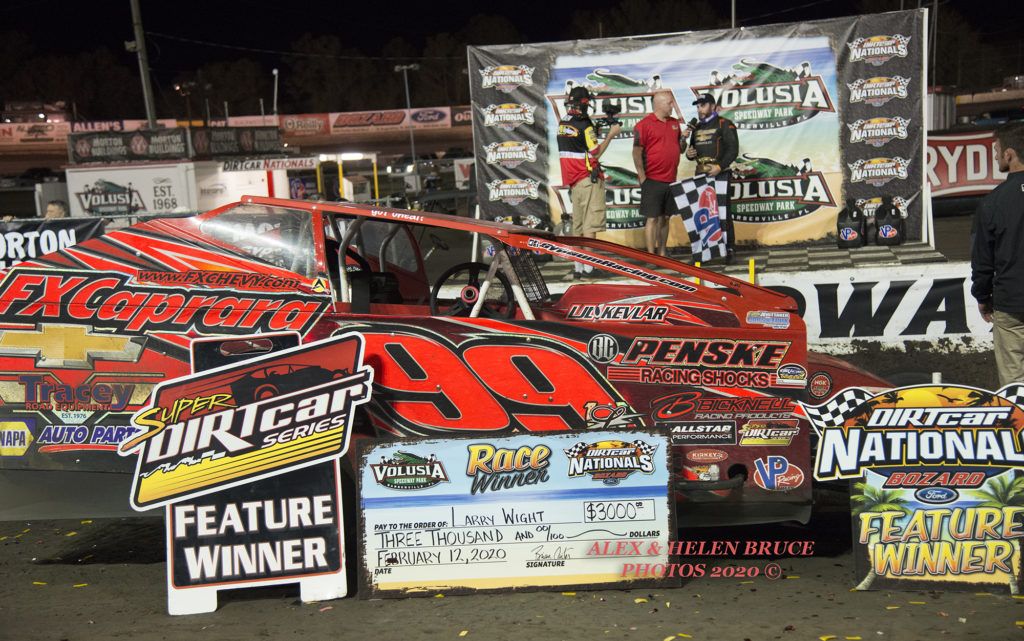 As he often does, Wight found purchase on the high side.

“That thing just came alive on the top. We were able to run that middle-to-top through 1 and 2 and right through the middle in 3 and 4,” said Wight. “It felt like the car was just glued to the track, so I just kept running that line and I didn’t see anyone showing a nose. It’s one of those deals where you’re the leader and you don’t know what line is better.”

After making the fateful pass on Hearn, Wight built a lead. A few restarts bunched up the field and Stewart Friesen drew in.

“As soon as he showed that nose I knew it was time to go to the bottom. I knew if I could get a couple lapped cars and not have to get off the bottom, we’d be alright. I caught Jeremy Smith and I just stayed there. I knew Stewie would have to Bonzai-it to make it work.”

Wight’s DIRTcar Nationals success has come with a lot of trial and error and heartbreak.

“We’ve always enjoyed coming down here. We’ve been really close over the past six years. There were a lot of wins we let slip out,” noted Wight. “I just think we have a better handle on the car. The crew is meshing. Brandon and Jake are just working their tails off on this thing. We finished last season on a high note and this is a great way to kick off this season.”

Once Wight established his lead it was Stewart Friesen, from Sprakers, NY, that stepped up to the plate. Late in the race, Friesen caught Wight in lapped traffic. Friesen drove the Halmar Racing No. 44 deep into turn 1 but failed to get alongside Wight. After 30 laps Friesen finished in second.

“The track narrowed up late in the race and I wasn’t able to get a run on him,” said Friesen.

Friesen is currently second in Gator Championship points. He also busy day at the Daytona International Speedway with 2 practice sessions in his NASCAR Gander RV & Outdoors Truck Series No. 52.

Williamson and his team know as well as anyone that consistency wins championships.

“There are 3 more races in this deal. It just goes to show you how good this Buzz Chew team is. We unloaded fast and that’s because of all the hard work during the winter in the shop,” said Williamson.

The track conditions at Volusia Speedway Park always keep the drivers guessing and hitting the right set up is key.

“The track was a little bit slippier,” noted Williamson. “I felt our car was a little better last night than it was tonight. When you start on the pole you can get into clean air and control the race. I think we’ve got a little bit of work to do.”

It looked as though the stars were aligning for Brett Hearn when he drew the pole position in the Albany-Saratoga Speedway/Brett Hearn’s The Big Show Top 8 Redraw.

At the start, Hearn was immediately contested by Larry Wight. The No. 99L drew alongside the Madsen Motorsports No. 20 and after a lap-long door-to-door, Wight bested the 900 plus Feature winner coming out of turn 4. He finished fourth in the 30-lap Feature.

Hearn crossed the line second to Erick Rudolph in his Heat Race and was coming on strong before Dave Farney threw the checkered flag. It appears that ‘The Jet’ is fully armed and ready for take-off.

The Gypsum Racing No. 91 of The Franklin Flyer Billy Decker struggled in Time Trials, which set him back in the Heat Race. Fortunately for the race fans in attendance at Volusia Speedway Park, Decker passed 9 cars to go from sixteenth to seventh making him the race’s hard charger.

Join us tomorrow night at Volusia Speedway Park for the race three of the 2020 DIRTcar National presented by Bozark Ford. If you can’t make it to the track, log in with DIRTVision and get a month-long Fast Pass to catch all the action live.