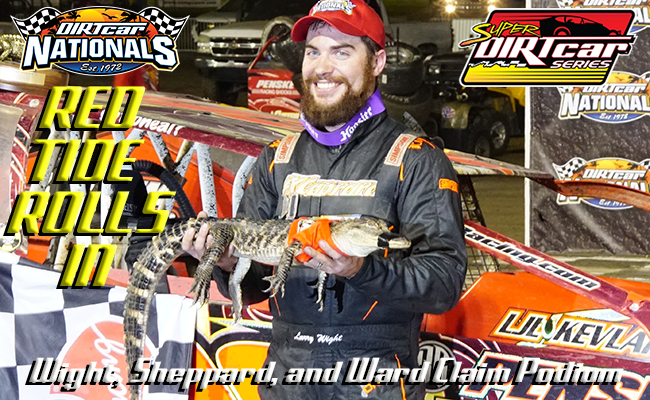 BARBERVILLE, FL – February 15, 2019 – If the 2019 DIRTcar Nationals truly sets the tone for the rest of season, then Super DIRTcar Series Big-Block Modified fans are in for a banner year. Friday night’s third round of the quest for the Big Gator at Volusia Speedway Park was captured by Gypsum Racing’s No. 99L Lightning Larry Wight, who thrilled the crowd by blasting around the high-side of the track no matter how little cushion was left to lean on.

Early race leader Matt Sheppard was overtaken by Gypsum Racing teammates Wight and Pat Ward, but seven-time champion Sheppard battled back and eventually slid under the veteran pilot Ward to retake second place. Pole-sitter Peter Britten challenged for a top-three, running the high side as well, but was forced to settle for fourth.

Wight, the defending NAPA Super DIRT Week champion from Phoenix, NY, brought the crowd to its feet with his distinctive high-side racing. While Sheppard and Ward searched for the right line late in the race, Wight powered to the checkered flag.

“There was enough of a cushion there where you could really drive it in hard,” Wight said in a confetti-filled Victory Lane. “As long as the car would turn off the cushion to be able to run the middle up in four, it seemed to pick up a lot of ground. I saw Matt [Sheppard] try a couple times, and he really shoved the nose bad, but I think we were a little bit freer and was able to do it.”

Like many of the teams, Wight and his Gypsum Racing team are trying a variety of set-ups. In essence, there is a race within the race. Since many of the drivers are experimenting with their set ups, it’s up to the them to figure out where to put their car on track to get the most out of it.

“We weren’t really sure what we were going to have,” Wight said. “We kind of threw some stuff at it. We changed our Penske shocks and played around a little bit. I think we found a happy medium. I was able to turn while on the throttle, and other than the first night, we haven’t been able to get that push out of it, to be able to get around the corner. Last night we were too loose and now we had to back it up to get it tighter.”

Those set up adjustments turned out to be vital, because Wight hoisted the Little Gator trophy in Victory Lane. “I’ve been chasing one of these little ones [Gator trophies] for a long time now so it’s great to put that on the mantle.”

With his second-place finish, Matt Sheppard now takes over the Gator Championship lead. His main rival in the standings, Billy Decker, had a motor problem and failed to finish the race. Sheppard started on the outside pole, but he slipped up in the middle part of the race and got jumped by Wight and Ward on a restart.

“In the middle of the race I fell back to fourth or fifth there,” Sheppard said. “I finally caught a groove where I was able to steer in the center of the corner and get back by a couple guys. It’s a solid second tonight.”

The excellent racing surface proved to make for another challenging but fun track to drive. Sheppard felt as though the car was driving him. “The main reason I was trying different lines is because I was following the car wherever it was going, because I certainly wasn’t driving it,” Sheppard said grinning.

Past Florida Big-Block Modified Champion Pat Ward had his best finish of the 2019 DIRTcar Nationals. Ward was pleased with how the track conditions played to his favor. When the track slows down it, “puts it back into the car and driver’s hands a little bit more. Hats off to Larry [Wight]. If there’s a little bit on top, you don’t want to want to leave it open, because he’ll go by you. I kind of overdrove trying to catch back up to him. We’ll take third.”

Erick Rudolph has now received the KSR Hard Charger Award two races in a row. The No. 25R advanced 20 positions in the last 60 laps of racing. He’s currently sixth in the Gator Championship standings.

New Graham Racing driver Anthony Perrego has been very consistent over all three DIRTcar Nationals races. Perrego sits third in the Gator Championship points standings thanks to two top-fives and one top-10. Consistency wins Championships, so don’t overlook the No. 18 car in the final night of the DIRTcar Nationals.

The Super DIRTcar Series returns to Volusia Speedway Park Saturday for the final night of the DIRTcar Nationals, the awarding of the Big Gator trophies, and what will surely be another incredible race for $5,000 to-win.

If you can’t make it to the track, head over to www.DIRTVision.com and catch the entire racing program live.