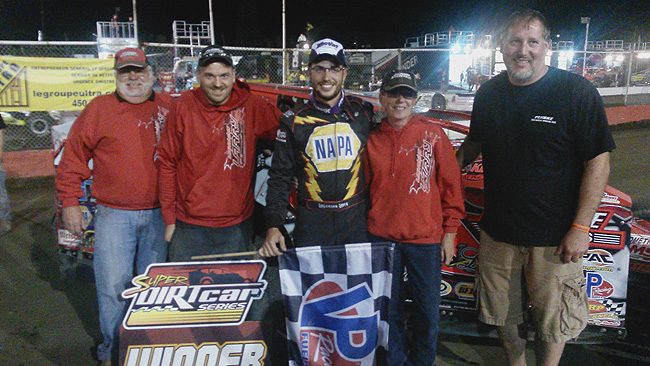 Wight claws back for Granby victory

Wight claws back for Granby victory

GRANBY, QC – Larry Wight finished what he started at Autodrome Granby and left town with the 2nd Super DIRTcar Series win of his career and $6,000.

The 22-year-old driver of the Gypsum Express No. 99L set a new track record during time trials, won his qualifying heat, drew the pole and sealed the deal in a 100-lap thriller despite a big-time test from Brett Hearn.

Wight met with little resistance in the early going although Danny Johnson and Billy Decker kept him in sight, but by lap 25 Hearn came calling after making short work of Mario Clair, Rich Scagliotta and Decker on a restart.

The “Jersey Jet” reeled in Johnson a few laps later. He began to pressure Wight from the low lane and passed him for the first time exiting turn four, 55 laps in.

“Lightning Larry”, working the high side, got ahead of Hearn multiple times in the next several laps only to find himself back in second place by the time he passed the flagstand.

He finally got a wheel in front at the line on lap 62. A full straightaway behind, Johnson, still in third, had his hands full with a resurgent Matt Sheppard. The points leader pitted early to remedy a bad push and then stormed back up through the field.

“I got a good lead again and I was trying to save the tires when the yellow came out again (Pat Ward came to a stop on lap 78),” Wight said.

Hearn muscled under Wight in the fourth turn to lead lap 80, gave way on lap 81 and nearly led on lap 84 before Wight took control for keeps.

“He showed me the bottom and he raced me clean,” Wight said. “I kept it out there, still trying not to burn off the tire and hoping it would stick, which it did.”

“It was an exciting race from my seat,” Hearn said. “It was a nice win for Larry. He had a good car the whole race.”

Sheppard got home third, well ahead of Johnson, with Decker a nearby fifth. Gary Tomkins, very strong over the second half of the race, was sixth. Steve Bernard, who did a lot of side by side racing with both Decker and Tomkins placed seventh.

The next Super DIRTcar Series event is at Brewerton Speedway September 19.