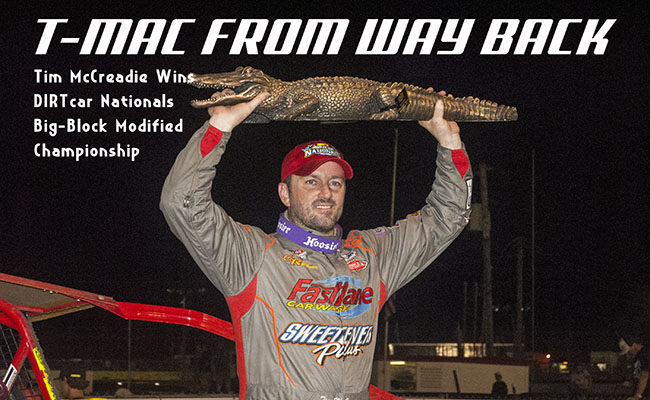 BARBERVILLE, FL – February 17, 2018 – Tim McCreadie brought the house down at Volusia Speedway Park by carving through the field from 27th to first, winning the 50-lap Big-Block Modified Feature and the DIRTcar Nationals Championship. McCreadie’s charge and late-race pass on Stewart Friesen earned himself his first DIRTcar Nationals Big Gator. The crowd roared as the No. 39 Sweeteners Plus crossed the finish line ahead of Stewart Friesen and Mike Mahaney.

Tim McCreadie’s feat was made that much more impressive by the fact that he pulled double-duty all week long by racing in both the Big-Block Modified and World of Outlaws Craftsman® Late Model divisions. “It’s amazing,” said Big-Block Modified Big Gator Winner Tim McCreadie. “I didn’t have time to give the right feedback (to the team). It’s so hard to run two divisions. I love doing it and we might forget how hard it was and do it again next year.”

Despite the wins, nothing came easy to the No. 39 team as they needed to use a provisional to even participate in the finale Feature of the DIRTcar Nationals after failing to qualify in the Last Chance Showdown. “I told Vic [Coffey], I don’t know what’s wrong on the right rear, we were having a lot of issues. He made the change, I jumped in the car. I could tell we both had a bunch of desperation on our faces as I pulled away. The thing came alive in the Feature. The slower it (the track) got, the better I felt,” added McCreadie.

Lapped traffic factored heavily in the winning pass. “It’s one of those things when you’re running second, the lapped cars are hard to pass for the leader. I got lucky (with the pass),” McCreadie noted.
The pass was made even more impressive because of the apparent domination Stewart Friesen had on the field up to that point. McCreadie recognized his fellow competitor in Victory Lane. “It’s never shameful to lose to Stewart Friesen. He beat me twice last year because he’s one of the best at this and that’s why he’s making a name for himself down at the big track (Daytona International Speedway). Tonight, I was able to snooker him. If a yellow came out it would be different but on that one green (flag) run, it just kept getting better. I think he [Friesen] got a little baffled up in traffic and it opened the door,” said McCreadie.

Stewart Friesen was understandably disappointed, “We had a great car,” said runner-up Stewart Friesen. “These guys worked really hard. I’m not going to sit here and moan about it. It was a heckuva a race. He [Tim McCreadie] just got a couple breaks in lapped traffic. Great race. Great guy to race with. It’s cool. It sucks but it’s a good run for us.”

Mike Mahaney captured his best result of the 2018 DIRTcar Nationals with a third-place finish. “We stepped up every night and got better and better,” said podium-finisher Mike Mahaney. “Hats off to my team, they worked so hard. I want to thank Buzz Chew for giving me this ride and all the fans for coming out all week. It’s been a long week, washing cars and working on cars. I want to thank everybody that came and helped out. I’m loving getting to do this and I hope we can come back next year.”

That concludes the DIRTcar Nationals for 2018. The Big-Block Modifieds’ next race is at Fulton Speedway on Saturday April 28th for the 100 lap High Bank Holdup. If you can’t make it to the race, you will be able to catch all the action with a subscription on www.floracing.com or listen to the audio on www.dirtvision.com.