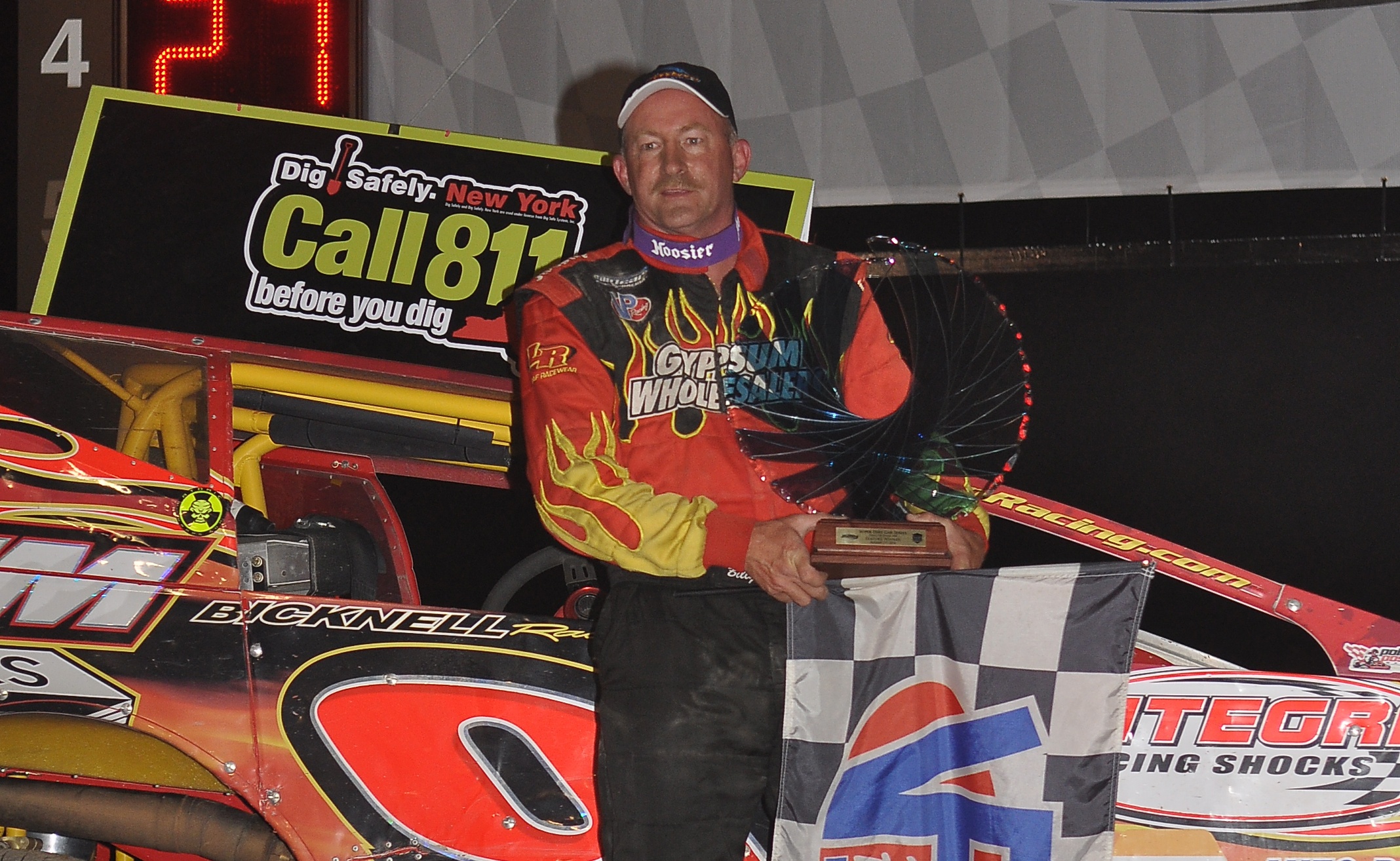 WEEDSPORT, N.Y. — August 8, 2014 — It had been four long years since the mighty Big Block Modifieds of the Super DIRTcar Series had set wheel to the historic three-eighths-mile oval at Weedsport Speedway, and drivers and fans alike were ready to make history Thursday night at the hallowed track.

In the return of the ‘Hall of Fame 100’ to the Weedsport site, fans packed in the newly rebuilt grandstands watched as Billy Decker, of Sidney, N.Y., powered past series point leader Matt Sheppard, of Waterloo, N.Y., to pick up his sixth career Super DIRTcar Big Block Modified Series victory at Weedsport Speedway.

Decker was seventh overall in time trials with a lap time of 16.152 seconds, with fellow LJL Racing driver Larry Wight, of Altmar, N.Y., claiming the Pole Position Raceway Fast Qualifier Award. Sheppard was sixth in time trials and both he and Decker finished second in their respective heat races.

Sheppard had the advantage at the green flag having drawn the pole, with Brett Hearn, of Sussex, N.J., taking the second front-row starting position. Chuck Bower, of Lansing, N.Y., charged from third to second, passing the Madsen Overhead Doors No. 20, but could not find enough speed to challenge Sheppard in the lead.

Caution conditions overtook the speedway early in the race, with the Mohawk Northeast No. 98h of Jimmy Phelps, Baldwinsville, N.Y., stopped and the Gould Erectors and Riggers No. 43 of Keith Flach, Ravena, N.Y. spun in turns 1 and 2. Phelps pulled pitside during the lap-3 caution, but returned to the track before the green flag.

The lap-7 restart was soon followed by another caution, this time brought for Tim Fuller, of Edwards, N.Y., whose No. 74 slowed to a stop on the backstretch with mechanical issues. Fuller wheeled to the pit area and packed it in for the night.

Sheppard was strong again off the next restart, and this time would have several green laps to build on his lead. He pulled away from the field, leading over Bower in second, Hearn in third and Decker in fourth. Lapped traffic in lap 23 did not slow Sheppard’s advance, and the distance between the leading FX Caprara Car Co. No. 9h and runner-up Bower continually expanded. Hearn started to build momentum as green laps counted off, finally passing Bower in lap 35 before a lap-38 caution slowed his progress.

Patience paid off for Decker, who was running in sixth, as mid-race track conditions proved ideal to make his move at the lap-45 double-file restart. He powered past Hearn and Bower at the green flag to claim second, and made his way toward Sheppard.

Fifteen laps later, Erick Rudolph, of Ransomville, N.Y., who had surpassed Hearn for the third spot, spun out in turns 1 and 2. With nowhere to go, Hearn plowed into the Page Trucking No. 7z and the yellow flag waved. Rudolph remained in the pits the rest of the night, but Hearn stayed on the track despite significant body damage to the No. 20 right side panel.

Off the subsequent double-file restart, Decker found enough bite to challenge Sheppard, and the “Franklin Flyer” took off as the new race leader.

“We held our own on the outside around (turns) 1 and 2, and then coming off turn 2 we had the preferred groove,” said Decker, who went on to claim his third Super DIRTcar Series race of 2014, his second in a row. “At that time, I thought I was getting a little bit better and Matt’s Sheppard’s right rear (tire) was sealing a little bit. At that stage, I thought it was our race to lose.”

Decker took home an impressive winner’s share of $10,000, but Sheppard was still able to go home in the Super DIRTcar Series point lead with a mere five-margin over Decker.

“He was faster than we were,” Sheppard said of Decker, who chauffeured the Gypsum Wholesalers No. 91. “We started on the pole, tried to run away and hide, but we just couldn’t quite do it.”

Sheppard stayed strong in second, fending off late-race challenges from Justin Haers, of Phelps, N.Y., in the Phelps Cement Products No. 3h.

“I saw him there at one point, then after that I was just trying to get through lapped cars to make it to the end,” Sheppard recollected.

Haers, who finished third, was pleased to add another top-five finish to his series record for 2014.

“I always like to win, but starting tenth and getting to third was definitely a good run for us,” said Haers, picking up his third top-five. “We had a really good car at the end of the race. Me and Matt (Sheppard) had a pretty good ballet the last five laps.

“It feels really good being back here at Weedsport,” Haers continued. “It’s a track I pretty grew up racing. I’m really excited to be here, and I’m glad we had a good car count and to see all the fans here tonight.”

Danny Johnson, of Rochester, N.Y., finished fourth in Thursday’s 100-lap feature after starting 17th to collect his sixth top-five finish of the season. Jimmy Phelps started 23rd and made his way to fifth, even after his early-race pit stop pushed him back to the rear of the field. Billy Dunn, of Watertown, N.Y., started 11th and finished sixth, Hearn finished seventh despite damage from the lap 61 collision and Mike Mahaney, of King Ferry, N.Y., finished eighth after starting 27th on the grid. Rounding out the top ten are Gary Tomkins, of Clifton Springs, N.Y., in ninth and Larry Wight, of Almar, N.Y., in tenth.

For more information about the Super DIRTcar Series, including the full 2014 schedule of events, visit www.superdirtcarseries.com.