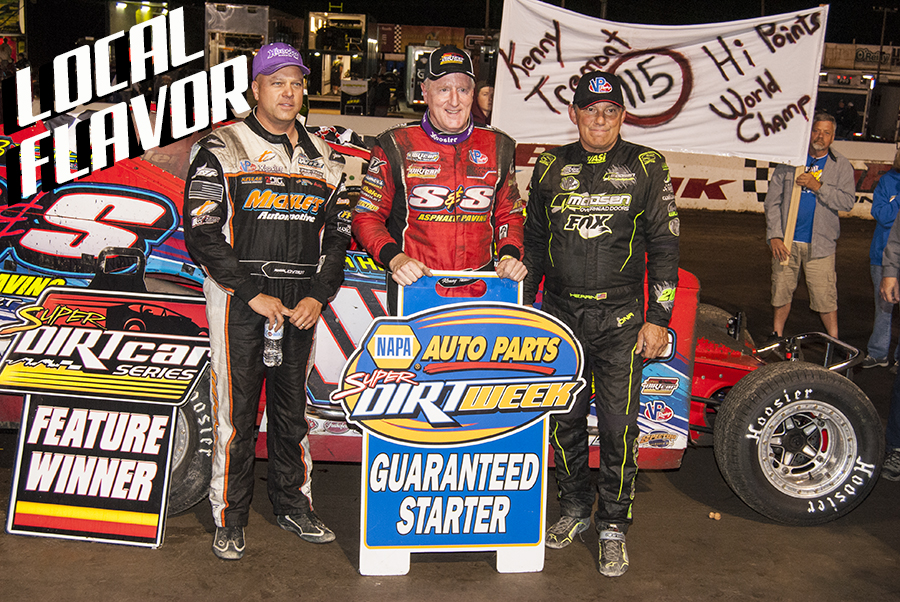 WEST LEBANON, NY – August 31, 2019 – With just ten laps to go in the 101-lap $25,500-to-win Mr. DIRT Track USA, NAPA Super DIRT Week Qualifier, Kenny Tremont Jr. passed Ronnie Johnson to take the checkered flag. Johnson had led the entire race up to that point, but Tremont was not to be denied the defense of his Mr. DIRT Track USA title. Brett The Jet Hearn started in the outside pole and never left the podium positions finishing third.

Kenny Tremont Jr. has now won the Mr. DIRT Track USA title six times and has won two in a row.  Those are not the end of the accolades, as Tremont also secured his fourteenth Lebanon Valley Speedway Track Championship on the same night.

The veteran pilot of the No. 115 knows exactly how to play out strategy at The Valley of Speed.

“We started out on hard rubber. Our car started to get better and better. I did a couple of things inside the cockpit where we could actually tighten it up. It kept coming and it kept coming. Then I got up to Ronnie [Johnson] and I thought that was all I got. But I was able to make a few more adjustments and tighten it up a little bit better.”

The fan-favorite West Sand Lake, NY driver jokingly let Shane Stewart and the crowd know his overall strategy. He said, “I planned on leading every lap!”

As a Lebanon Valley Speedway regular, Tremont recognized the efforts of his home track.

“Thanks to Howard [Commander] and Lebanon Valley Speedway for putting this deal together. It’s nice to run for this kind of money,” Tremont noted.

The back-to-back wins have given the Lebanon Valley Speedway faithful something to brag about. Their guy went out and beat the best of the best.

“It feels really good. I’ve got a great team and great sponsorship,” said Tremont. “I’m just surrounded by good people. I can’t lose right now. We’ll take advantage of it while we got it.”

Kenny Tremont Jr. and Stewart Friesen are the only non-Series drivers to have guaranteed starts at NAPA Super DIRT Week XLVIII. “We’ll be there and I am looking forward to it. Hopefully, we can run a little bit better up there too,” Tremont added, regarding his plans to go to Oswego Speedway.

Lap 91 was the heartbreaker for Ronnie Johnson, the driver from Duanesburg, NY. Johnson described the late stages of the race:

Johnson put on a show and kept his No. 2RJ out in front of the best Big Block Modified drivers there are for 91 laps.

“This TEO car really ran well tonight. I gotta thank everybody that’s helped. We ended the year with a good run and hopefully, we’ll be back next year,” Johnson commented.

Brett Hearn, from Sussex, NJ, ran in second place most of the night until Tremont overtook him. Hearn looked strong and was taking care of his equipment when disaster struck.

“We had a tire come apart on the right rear. You know I thought I was taking my time with Ronnie. Maybe it was an old tire. It just came apart.”

Unfortunately, the disintegrating right rear tire cost him a run at the money, but the car did not seem right to Hearn.

“You can feel comfortable with your car here, but tonight I didn’t,” Hearn laughed.

Erick Rudolph, who is locked in a tight points battle with Matt Sheppard and Mat Williamson, picked up the KSE Hard Charger Award. Rudolph started the race day behind the eightball as he Time Trialed poorly, missed the transfer out of his Heat Race, and then missed the transfer again out the Last Chance Showdown. Luckily a provisional put him into the field and he made the best of it by picking up twelve positions to finish thirteenth.

Kyle Armstrong, from New Milford, CT, raced his way into the Dig Safely NY 811 Redraw. However, Armstrong drew twelfth out of twelve positions, so for that he receives one free tire courtesy of Hoosier Racing Tire.

The Ravena, NY native, drive of the No. 43, Keith Flach was fast off the trailer. He was fastest in his Hot Lap group and then backed that up with the fastest overall time in Time Trials, which awarded him the Billy Whittaker Cars Fast-Time Award worth $100.

Next up the Series storms in Utica-Rome Speedway Sunday, September 1 for the $7,500-to-win New Yorker 100.