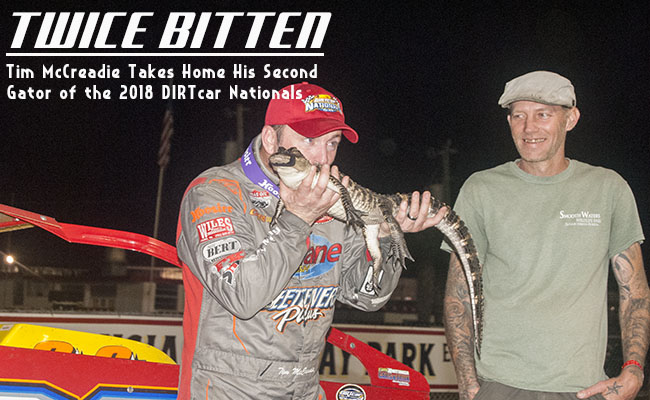 Tim McCreadie Captures His Second Gator of the 2018 DIRTcar Nationals

BARBERVILLE, FL – February 15, 2018 – Tim McCreadie now has two Gator trophies to take home to New York State. Wednesday night McCreadie found himself in Victory Lane for the World of Outlaws Craftsman® Late Model Series 50-lap Feature and Thursday he strapped into the Sweetners Plus Big-Block Modified and held off Stewart Friesen and hard-charger Danny Johnson for the win.

Tim McCreadie, Justin Haers, and Stewart Friesen dominated most of the race and traded blows lap after lap. T-Mac used the cushion to maintain his lead throughout but Friesen repeatedly attempted slide jobs to make the pass. Haers stuck his nose in too and they were three-wide for the lead at times.

After a roof-pounding celebration McCreadie noted, “It’s amazing how things can turn in a week and a half. When I came over here I thought we were gonna be in big trouble. These guys that run these Modifieds, they’re just as good as the Late Model guys. You see the 27j [Danny Johnson] out there, you see Stewie [Friesen] beside you, and Justin [Haers]. I made a lot of mistakes on the last three laps, but I was just lucky enough that the cushion would hold me in.”
It was a busy night for McCreadie as he also competed with the World of Outlaws grabbing a seventh-place finish. He credited his crew for making the changes to the car he needed. “I love making all our guys happy. I gave them zero feedback, but they changed up the car while I ran the Late Model.” The changes proved to be the right ones as the No. 39 was covered in celebratory confetti at the end of the night.
Stewart Friesen, in the Halmar No. 44 machine, drove up from eighth place to finish second. He seemed to find grip in the center of the track while others drove around the very top or bottom. Friesen said, “The first one still stings…but we have a great group of guys and had a lot of fun.” A flat right-rear tire took him out of the lead in the make-up Feature earlier in the night.
“The Doctor” Danny Johnson was the race’s hard-charger. He made up 12 positions to take his place on the podium in third. “I’m really glad to come up with a third-place finish after coming from deep in the field.” When asked if he would have had a chance at the win had he started farther up, Johnson laughed and said, “you never know!”
On Friday, Night 11 of the DIRTcar Nationals will showcase the Super DIRTcar Series Big-Block Modified once again for a 30-lap Feature. The Volusia Speedway Park grandstand gates open at 5:00 PM but if you can’t make it to the race track, follow along with live audio and pay-per-view video at www.dirtvision.com.