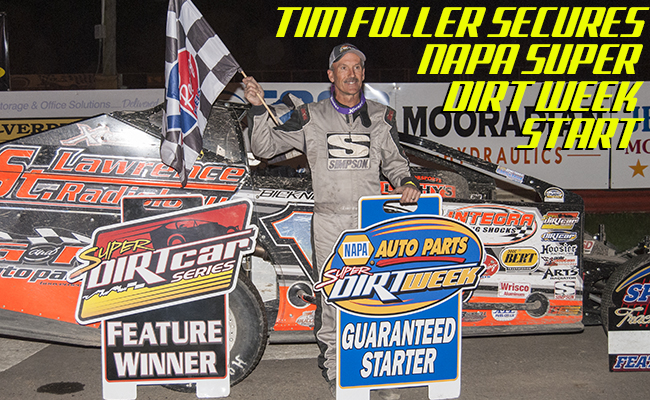 Three frightening accidents halted racing action during Hot Laps and Heat Races. The most spectacular mishap belonged to Billy Decker, who took his nickname The Franklin Flyer too literally with a vicious hit in turn 3 that sent him airborne. Decker got out of the demolished racer free of injury, but was bewildered by what caused the wild accident.

Two other hard crashes brought out the Red Flag in Heat Race 4. Jack Johnson’s son Ronnie Johnson got sucked into the retaining wall in turn 1 and sent for a barrel roll. He got out of his car gingerly and walked to the ambulance. After the restart, Heat Race leader Jessey Mueller, made the same mistake as Johnson, got caught out too high, hit the wall in turn 2, and rolled the no. 19. After that, the night remained exciting but without further serious incidents.

Willy Decker and Championship Points leader Matt Sheppard brought the thirty-one field to the green flag. Sheppard got a great launch and immediately overtook Decker for the lead. On a restart after a brief caution, Larry Wight nabbed the top spot from Sheppard and promptly drove away with a strong lead. On lap 17, Bobby Varin in the no. 00 backed into the turn 2 wall and slid along the top of the wall, sparks flying. Although the Red Flag was shown, Varin was able to drive his Big-Block Modified to the pit area despite the damage.

Stewart Friesen, a ringer at Fonda Speedway, closed in on Larry Wight after the restart and made the pass for the lead on lap twenty-three. Friesen went on to lead the next 64 laps, but the running order behind him was not stagnant. Tim Fuller, after starting in thirteenth position, cut through the field up to second place by lap 70. From there Fuller inched forward, cutting into Friesen’s substantial lead.

Fuller’s car seemed to come alive in the last half of the race, dispatching top drivers lap after lap to claw into the top 3. “With the coil cars, the longer the race is, the better it gets. We bided our time, saved our tires a little bit, and that’s what it takes. Like I said last week, you gotta prepare for the end.” Friesen’s lead shrank dramatically with fifteen laps to go and Fuller began pressuring him hard on the low line between turns 3 and 4. When Fuller made the pass, it looked as if Friesen’s car lacked drive out of turn 4 and that was enough for the no. 19 to complete the winning move.

With 2 laps to go, Matt Sheppard’s right rear tire gave up the ghost and forced a caution flag. Somehow Fuller managed to hold off Friesen on the restart to win “The Jack” and a 12th place starting position at the 47th annual NAPA Auto Parts Super DIRT Week.

In Victory Lane a pleased Tim Fuller described the race: “It was a lot faster pace [than his win at Mohawk Int’l Raceway]. I knew we had a good car and it was going to same some luck making it through there all the way. Once we got into the top 3 I knew we had something. Stewie just took off really good. He got up there on the top and I think he got his right rear a little bit hot and I was able to scoop it.”

Despite winning the Mohawk Int’l Raceway Track Championship and breaking the single season win record at the track, Tim Fuller lamented his 2018 season until now. “We had a disastrous year, but the last couple of weeks have been pretty good. Very fortunate to be able to come down in front of all the people here at Fonda and be able to do this on Jumpin’ Jack night.”

Winning “The Jack” meant a lot to Fuller, “I raced with Jack and we’ve become pretty good friends. It’s unfortunate what happened and it’s just nice to win on his night.”

Next up for the Series is the highly anticipated NAPA Auto Parts Super DIRT Week October 1-7 at Oswego Speedway.