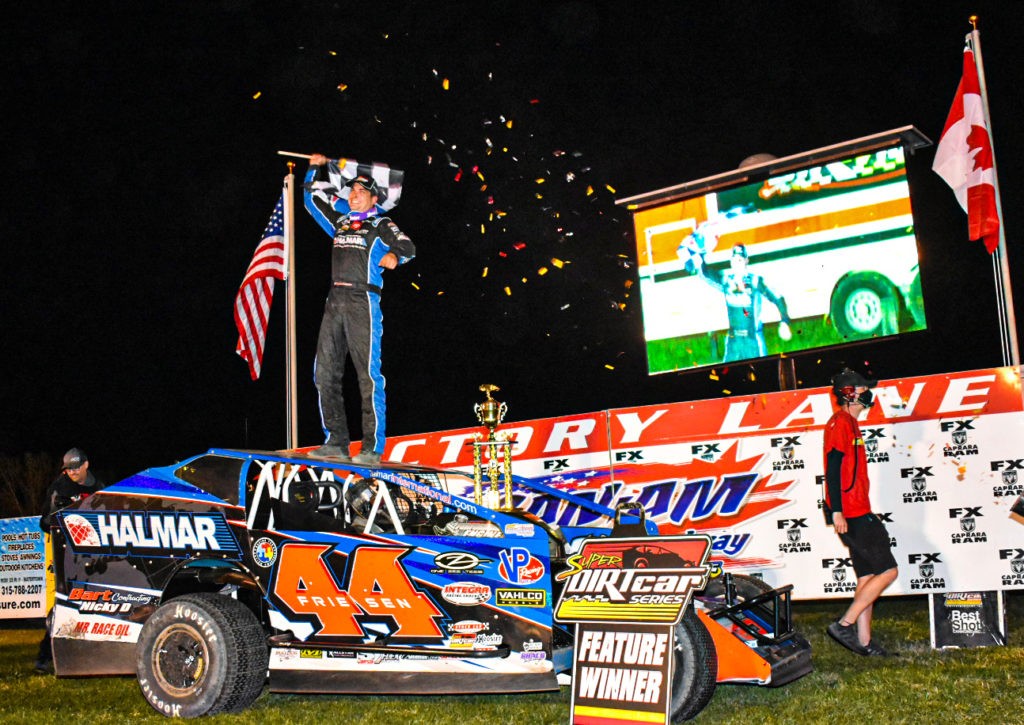 LaFARGEVILLE, NY – Stewart Friesen, from Niagara-on-the-Lake, Ontario, wheeled his way to the front and picked up a healthy $7,500 for a night’s work. The #44 flashed across Can-Am Speedway’s start/finish line just ahead of Tim Fuller, who led the most laps. Lightning Larry Wight, from Phoenix, NY, brought the #99L home third.

Max McLaughlin, the 2021 DIRTcar Nationals champion, led the field to the green flag with veteran Big Block pilot Carey Terrance. Almost immediately, the #32c was swallowed up and faded back into the field, eventually pulling the car behind the wall on lap 83.

Tim Fuller took the early lead and began driving away from the field, however, he wasn’t alone. Fuller was towing an eager Erick Rudolph in his wake. Rudolph, in the #25R, slowly gained on Fuller as the laps clicked off. Finally, Fuller hit lapped traffic at lap 30. Rudolph closed in and the #19 and #25R swapped first and second positions multiple times in a heated battle.

At that point, it looked as though Rudolph and Fuller were going to lap the field and Friesen watched them get farther and farther away.

At the halfway point Fuller began to pick away at the lapped cars, which became more and more difficult to get around. Rudolph was not able to keep up Fuller’s pace of passing cars and fell back.

Meanwhile, Friesen got to work on Larry Wight, from Phoenix, NY, who was occupying third.

“I got by a couple of guys but then when I got up to Larry he’d move and take my line away,” said Friesen. Eventually, Friesen was able to motor by Wight on his path to the win.

Lap 70 turned out to be a fateful lap for the Halmar Racing team. Rudolph slowed down and had back to go to the pits for a repair and brought out a caution flag. This lined Friesen up next to Fuller on the restart and the #44 was able to power around the #19 to make a winning pass.

Friesen’s car came to life at just the right time but it wasn’t a coincidence.

“I had the car set up for the beginning of the race with a heavy fuel load so it would come in towards the end,” said Friesen. “It got good around lap 60 or 70. I thought early on I would be able to make the top work in turns one and two and see if I could sneak by a few cars. I went up there and skated. It was a little dusty but then the middle cleaned off and that was pretty good.”

This was his 36th career Super DIRTcar Series victory. Friesen is only three away from Bob McCreadie on the all-time list.

Runner-up Tim Fuller was not pleased with his second step on the podium after leading most of the race’s laps. Fuller described the pass:

“He [Friesen] came down and I got out of it so we both didn’t crash but he’s an incredible talent, Fuller said. “You hate to get beat that way. I think we were better than the first place car but we got snookered there a little bit. It happens.”

Fuller was satisfied with the effort but not the result.

“I just wish I’d had a taller spoiler,” Fuller cracked. “But I wouldn’t have done anything differently.”

The Gypsum Racing machine of Larry Wight crossed the line third after battling in the top five the entire race. Wight was searching for a way to compete with Fuller and Friesen but just couldn’t find another gear.

“I stayed on the bottom because of those holes but once I saw Friesen show his nose up there I knew I had to move up and try it,” Wight noted. “We were a third-place car though. We’ll take it and build off of it for the next one.”

Track conditions for dirt surfaces can be tricky for the first race of the year however the Can-Am Speedway track crew brought the best out of our drivers and they were appreciated.

“Great job by the track crew for grading the track and giving us something to race on,” said Friesen.

Wight added, “For the first race of the year the track was beautiful besides one blemish but that was nothing to complain about. We weren’t sure what the track was going to do. Sometimes when they scrape the top layer off it turns into a dust bowl. The track took it though and the water soaked in. It actually had a middle line to it. We could run the top too.”

Race fans were elated to have the Super DIRTcar Series back underway and the 28-car starting field did not disappoint. The 100-lap battle was fought all across the track, from the very top, through the middle, and the bottom.

For example, hard charger Mike Mahaney, from King Ferry, NY,  made use of the racy surface by picking up 17 positions after starting 25th.

Seven-time Series champion Matt Sheppard was involved in battles constantly but the #9S did not stray far from its starting position. After redrawing 10th Sheppard looked to be on the move but a stubborn Peter Britten, from Queensland, Australia, would not give up position number six.

Next up for the Super DIRTcar Series Big Block Modifieds are a pair of $10,000-to-win, NAPA Super DIRT Week qualifiers at the dirt-covered Bristol Motor Speedway for the World of Outlaws Bristol Showdown. Get your tickets now or purchase a DIRTVision FAST PASS and enjoy all the World of Outlaws and DIRTcar Racing that you can handle.