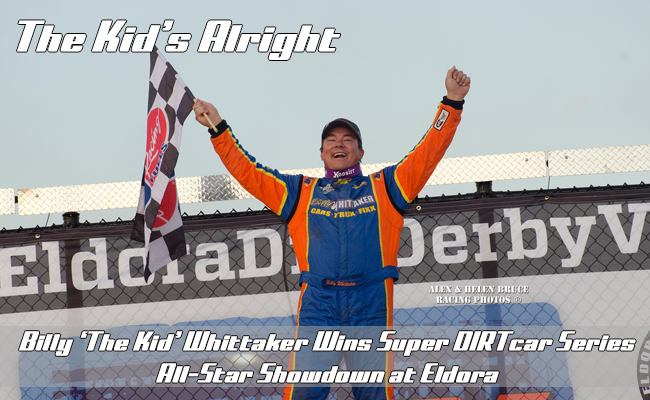 ROSSBURG, OH – July 19, 2017 – Billy Whittaker started on the pole and drove the cushion to perfection on his way to victory in the Super DIRTcar Series All-Star Showdown at Eldora Speedway on Wednesday night. While it was a non-points race, it was Whittaker’s first Feature win of any kind with the Series. The Central Square, NY drive was ecstatic in Victory Lane following the race.

“Tony Stewart’s done a heckuva job with this place,” Whittaker said. “I’ve never been here, so for me to roll off with this car and this team, you know I do this part-time, so this is as cool as it gets. Look at this place. All the way around, there’s fans everywhere.”

Whittaker finished seventh in his heat, but earned the pole for the 20-lap Feature via a 14-car inversion draw. The track position proved the deciding factor for Whittaker as he jumped out to a convincing early lead.

Rookie pilot Brandon Walters jumped ahead to second off the initial green flag from the third starting position, but was quickly under pressure from Hearn who challenged for the runner-up spot on lap four. Hearn took the spot in turn two and brought Decker with him to shuffle Walters back to fourth.

By lap five Whittaker had built a straightaway lead over Hearn, but wasn’t hustling the car any harder than usual, he said.

“I found a pretty good line right away and I was just driving around, honestly,” he said. “It was good. I didn’t see anybody. I didn’t hear anybody. I watched (flagman Dave Farney) for some signs and nobody was on me so I was just cruising.”

With eight laps to go, the Hearn-Decker tandem began to eat away at Whittaker’s lead. Whittaker ran against the cushion, which was planted on the outside retaining wall, early on, but dropped to the bottom in turns one and two as the race wore on.

“Early there was a little more bite (up top) and I saw it get blacker and blacker, but in one and two there was still a patch of bite in the middle,” Whittaker said. “If I could roll into it on the throttle, I could hit and then get off. I didn’t slide at all. Three and four you kind of slid into the cushion and drove off. Sometimes I did that perfectly and sometimes I didn’t. I was very fortunate to be out front and have some fun.”

Hearn was searching for the fastest lane to gain on Whittaker and tried several options with Decker in tow.

“I was searching and searching and I found some really good stuff that was working,” Hearn explained. “At one point, I started to really reel him in pretty quick, but with five to go I searched a little bit more and it kind of evened out for a couple of laps. I thought at one point I was going to get a shot at him, but it didn’t work out.”

Hearn tried to search for a better lane one final time with two laps to go. That move allowed Decker to show the nose under the No.20 and forced Hearn to be conservative. It proved the difference as Whittaker held on to claim the checker 1.033 seconds ahead of Hearn. When he saw the checkered flag, Whittaker couldn’t believe his eyes.

“I didn’t know how many laps were left, so the last three or four I started tightening up, going ‘where is everybody?” he explained. “When I saw the double checkered I thought ‘I’ll go one more lap just to make sure’. There it was, but I couldn’t believe it.”

The victory almost didn’t happen for Whittaker, who admitted he was hesitant to make the long haul from Central New York to the Rossburg, Ohio half-mile. The win certainly made the trip worthwhile and when Whittaker celebrated in victory lane, he didn’t want to come down off the roof of the car.

“I’m still shocked,” Whittaker said. “You never know when the next time’s going to be. This Series is so tough, so competitive. The combined number of years I’m racing against is insane.”

The second-place finish for Hearn was an impressive win after the his team battled through motor issues all day Tuesday, but managed to solve the problem and earn a top-five finish on Tuesday before Wednesday’s runner-up result.

“This was like controlled chaos for two days,” Hearn said. “To have the issues we had yesterday to start with, and at one point we thought we were going to be forced to go back to the shop (in New Jersey) and get something together for Thursday night (at Sharon). So, the way it all worked out, I’m tickled.”

The All-Star Showdown featured the Super DIRTcar Series full-time drivers and the top-six non-regular finishers from the July 18 full points event. Peter Britten and Larry Wight earned the Heat Race wins, which were lined up by open draw.

The Super DIRTcar Series is back in action tomorrow when it travels to eastern Ohio tomorrow for a return trip to Sharon Speedway in the Buckeye Ground-Pounder 100 on Thursday, July 19. For more information on the event, visit http://www.sharonspeedway.com/events/super-dirtcar-big-block-modified-series/.