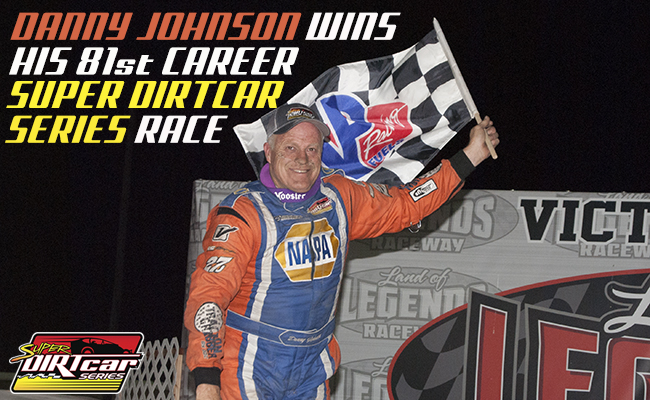 CANANDAIGUA, NY – July 5, 2018 – At the Land of Legends Raceway in Canandaigua, NY, The Doctor Danny Johnson launched his no. 27J Big-Block Modified from pole position to Victory Lane to capture his first Super DIRTcar Series checkered flag of 2018. Johnson lead the Liberty 100 from flag to flag, although runner up Mat Williamson closed in on multiple occasions but could not complete the pass. Points leader Matt Sheppard picked his way through the field up to a podium position, but never threatened for the overall lead. The no. 27J was simply the class of the field with the veteran pilot behind the wheel.

With this victory Danny Johnson now has 81 Super DIRTcar Series wins to his credit and 600 career wins overall. The Doctor jumps to fourth position in 2018 Series points thanks to winning his Heat Race and the Liberty 100. Johnson noted that his season is starting to turn for the better: “Yeah it [the car] was good all night. It was good at Cornwall the other night and hopefully we can keep on going and get on a roll. I’m ecstatic for George Shackleton and his wife Tammy and everyone that helps out.”

Land of Legends Raceway is a track that Danny Johnson called home for a long time. He’s turned thousands of laps on the Canandaigua, NY half-mile. “I came here for many years. It’s great to have a great car. It seemed the middle was really good for me. The bottom wasn’t too good for me. There’s a couple holes in turns three and four that were tough to get through. It was a long 100 lap race and I was just glad to see it over.”

Invader Mat Williamson was strong all night. In his Heat Race, Williamson outdueled five-time Super DIRT Week Champion Stewart Friesen for the win. The no. 6 Big-Block Modified pilot credited a new motor for some of the night’s successes. “I know we are good enough to run with these guys now. We’ve got a good race car, a good shock package, and a good bullet under the hood. Doug Holmes just put this thing together. Put it in yesterday. We weren’t gonna come. We had some oil leaks and stuff like that. But we worked late last night to get it in and good thing because the hard work paid off.”

Although Williamson is not a regular Series racer, he has proved himself to be a contender whenever the black no. 6 pulls into the pit area. “Danny is one hell of a race car driver. It’s tough to beat a guy like that. I’ll take a second place to that guy any day. He’s run a lot of laps around this place. The guy sitting third [Matt Sheppard] ain’t too bad either. I am pretty happy to be with these two guys up here. Happy that we had a good hot rod tonight.”

The Land of Legends Raceway provided incredible racing from start to finish. Another very hot New York summer day was on the books but the track proved racy, despite the heat. “This place is awesome. I mean there are so many groves to race on. It’s smooth and slippery and it’s not dusty. Makes you want to come back more often.”

Super DIRTcar Series points leader Matt Sheppard finished a solid third, a finish that stretched out his point lead over Max McLaughlin and Jimmy Phelps. “It was a good night for us. Congratulations to The Doctor. He was really good tonight. Matty [Williamson] was really good. They were the class of the field by far. We were pretty good but we didn’t have anything to run with them. It’s no big deal. We’ll work on our car and program and hopefully we’ll get better.”

The next Super DIRTcar Series race is at Utica-Rome Speedway this Sunday, July 8th. Sheppard hopes to improve on his Liberty 100 performance with a top two in the Freedom Fighter 100. “It’s a good start to a long week. That track was slick tonight and Utica-Rome Speedway is probably going to be the same Sunday, so hopefully we learned something tonight that we can apply Sunday. We’ve got a big weekend here so hopefully we can keep on rolling.”