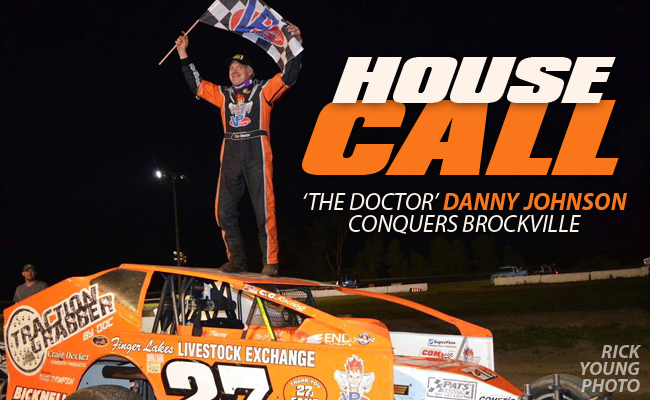 The Doctor calls at Brockville

Johnson put the Finger Lakes Livestock Exchange No. 27j underneath and past Dunn exiting turn four and drove off with the win in BOB FM/Coca-Cola 100 – race number three in the 2015 Big-Block Modified Series.

The two cars started on the front row and separated themselves from Tim Fuller and Billy Decker on multiple restarts. Mat Williamson of Thorold, Ont. rallied late to edge out Fuller for fourth. Decker did not survive fourth turn contact on lap 81 with Williamson. He wound up officially scored 24th.

Jimmy Phelps, who ran consistently in the top ten, completed the top five.

“The track got tight and it came to my liking because I had been too loose,” Johnson said in victory lane. “To go home with confetti on your car is a pretty good deal.”

Decker won the Pole Position Raceway Fast Time Award (14.583) and raced hard with Fuller for over twenty laps before settling into fourth for over 60 laps.

Dunn, from Watertown, NY, was trying to carry the checkers for the second time ever in a Super DIRTcar Big-Block Modified Series event to go with his 2013 Syracuse 200 win.

“I ran a little harder than I wanted in traffic,” Dunn said. “Danny was better at the end.”

The next stop on the Super DIRTcar Series is Grandview Speedway in Bechtelsville, Pa. Tuesday, June 16.