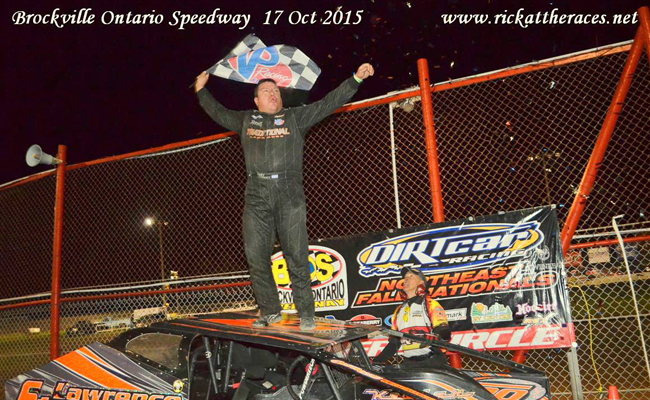 Terrance started third on the grid and was running fourth behind Danny Johnson, Gary Tomkins and Jordan McCreadie at the halfway mark after many laps of close-quarter racing.

Johnson snatched the lead from Jordan McCreadie on a lap-37 restart and brought Gary Tomkins along with him while Terrance diced with Billy Decker for the fourth spot.

By lap 37, Matt Sheppard, who was forced to jump into his back-up car after a nasty four-time flip off the top of turn three in his heat race and start 29th, had raced his way into ninth.

Terrance passed Tomkins for the lead while running on the high side on lap 72. The pair raced a few feet apart for several laps with Johnson, fast-rising Matt Sheppard and Chris Raabe in close pursuit.

“I was trying to get around some holes out there and I went all the way up to the top and found a line that worked great,” Terrance said. “The car was tight early, but it got rolling later.”

“The track was very racy,” Tomkins said. “You could pass in different places. I ran the softest tire and the thing took right off. It was a rocket ship.”

On the seventh and final restart with eight laps to go, Terrance drew away from his pursuers and won handily while Raabe mounted a late charge to finish third behind Tomkins after jousting with Johnson (4th). Sheppard rose to fifth while his closest rivals for the point lead – Brett Hearn and Billy Decker – finished 16th and eighth respectively.

The red flag was thrown twice in feature for rollovers by Ryan Arbuthnot and Billy Dunn.

The Big-Block Modifieds return to action Thursday, October 22 at Brewerton Speedway for a third attempt to complete the McDonald’s 100 and then square off for the $20,000-to-win All Ways 150 Saturday, October 24 as a part of the three-day “Last Call at the Port” extravaganza at Weedsport Speedway.