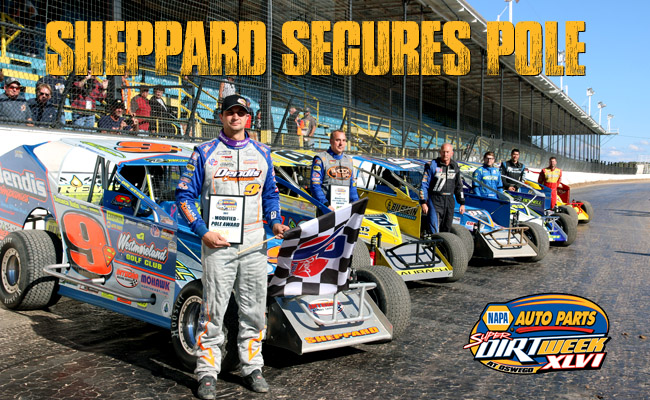 With a field of 55 cars taking time Thursday afternoon, all were vying to make the rest of their NAPA Super DIRT Week a little less stressful. Coming into NAPA Super DIRT Week, Sheppard has wrapped up 10 Series wins and is on pace to eclipse the single-season win total that he set last year. After going out in group seven, of 14, Sheppard set a blistering lap of 21.210 seconds, setting a new track record by over one and a half seconds.

“We found some grip down there in turns three and four, and the [car] stuck really good,” said Sheppard, who took to the track halfway through the qualifying seesion. “We figured the track would either stay the same or get faster, and it got faster so it worked in our favor.”

“We just went out there, kind of didn’t know what to expect,” said Laubach. “The guys were in the grandstands telling me what lines they were running and what they were doing, and we made some decisions on where to go on the track and hit the marks perfect. The track conditions took to our favor.”

After placing 22nd on the practice sheets, the Keith Flach No. 43 team went to work before qualifying and was able to secure the fourth starting spot for Sunday’s Billy Whittaker Cars 200.

“Anytime you can get into the top six you can obviously breathe a little bit of a sigh of relief,” said Flach. “Sunday is a different animal. We’ll start worrying about that, but definitely being inside the top six makes you breathe a little bit easier for Friday and Sunday. I’ve got to thank my guys; we were not very good in practice. We fluttered around 16 through 20th — just really kind of struggled — but they kept after and feeling really blessed to come out with a fourth-place result.”

Next up for the Big-Block Modifieds is practice on Friday at 3:35 p.m., followed by Camping World Friday Night Lights, featuring the Billy Whittaker Cars 200 Triple 30s.

Tickets for NAPA Super DIRT Week can still be purchased at Oswego Speedway. Visit SuperDIRTWeek.com for pricing and gate schedule.