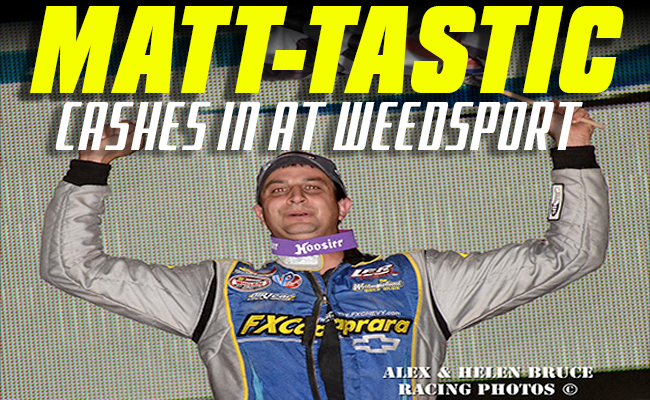 “We were kind of stalking him there. Danny was good. It seemed like we could roll there through three and four a little faster than he could but he was better in one and two,” said Sheppard in victory lane. “He just got jammed up there with the lap cars and I was in the right place at the right time. I think that’s what won it for us. We’ve been on fire with four in a row this weekend.”

Rudolph and Fuller battled side-by-side to the start but it was Fuller who took the early lead on lap two.

Fifth place starter Johnson moved his way into the third spot and soon chased down Rudolph. Johnson slid under Rudolph on lap six and took over the second spot.

The first caution of the night was brought out on lap eight with a slowing Larry Wight with a right rear flat.

Stewart Friesen running in sixth spot had a left front flat tire on his 44 machine and chose to stay out.

Fuller and Johnson battled side-by-side for the lead lap after lap as Fuller worked the topside and Johnson worked his way around the bottom.

Johnson was able to run down Fuller and capture the lead by just a car length on lap 20.

The field then slowed down as the second caution of the night was brought out on lap 22 due to Billy Decker who came to a complete stop on the front straightaway. Sixth place runner Friesen then pitted to change his flat left front tire.

Ninth place starter, Matt Sheppard dove into turns three and four under Cozze and pulled away in the fourth spot as he soon hunted down Rudolph and blew by him on the bottom for the third spot on lap 34.

Sheppard made up ground in no time as he was already knocking on Fuller’s doors by lap 36 and took over the second spot on lap 37.

Johnson tried to work his way through lapped traffic as Sheppard was soon at his bumper patiently waiting to make his move.

The third caution of the night was brought out on lap 49 due to a slow moving Mike Mahaney with a left front flat on lap 49.

Johnson remained the leader after the lap 55 restart over Sheppard, Fuller, Cozze and Rudolph.

Johnson caught the back of the field once again on lap 64 as he showed a comfortable lead over Sheppard and Fuller.

As Johnson worked his way through lapped traffic Sheppard was searching high and low for the fast lane to gain ground on Johnson.

Johnson and Sheppard were then a straightaway ahead of third place runner Fuller as they soon got into heavy lapped traffic.

Johnson got caught up behind the lapped car of Vic Coffey as he was running on the bottom coming out of turn two leaving the door open for Sheppard to go flying by on lap 80 and take over the top spot.

Johnson was searching all over the track to try and gain back some ground on Sheppard but Sheppard soon pulled away in lapped traffic. Sheppard sliced his way through allowing him to put more distance on second place runner Johnson.

Sheppard then drove his FX Caprara No. 9s to his eighth Super DIRTcar Series victory of the season.

“These are the races you want to win. This is the time of the year you want to be hot when the big money is on the line. We’re hot right now and it feels good.”

Johnson gave a hard fought battle but fell one spot short in the 100-lap feature main event. Even though Johnson came one spot short he was happy with how well his small block ran.

“We were really excited. It’s the first time the motor has been in the car. To bring the car here and have it perform this good we’re really happy with it,” Johnson said. “I wasn’t going to give up, I had to try. All of our big blocks are broken so we had to run our small block tonight. I lost my momentum. I didn’t have the torque the big blocks have to get off the corner. If we get our big blocks back we’ll be a little happier but right now we’re doing great with our small block.”

Fuller started on the outside poll and jumped out to an early lead, leading 20 laps of the main event. Fuller knew it was game over as soon as Johnson passed him and then saw Sheppard coming. Despite poor adjustments, Fuller crossed the finish line in third place.

“I think they were a little more versatile. This game Matt has going on, he just has to wait it all out. His car is that good right now. He just has to sit and wait for it to thin out. Congratulations to him,” said Fuller about Matt Sheppard. “Danny was good there on the bottom there too. As soon as I saw Sheppard coming up through the field I knew it was lights out. I was stuck in the middle. We made some poor adjustments thinking the track was going to be different than what it was. I was tight down the backstretch and lose down the front stretch. All in all it was a third.”

Race Notes: 41 modifieds attempted to qualify. 30 cars started the main event. Sheppard set his third fast time of the season with a 15.487 in time trials. Sheppard was also fastest overall in the heats with a 15.891.  Rudolph drew the Dig Safely pole position for the main event. Three cautions were brought out during the main event on laps 8, 22 and 49.

The Super DIRTcar Series will head to Canada for their final appearance of the year on Friday, Sept. 9th at Le RPM Speedway and Saturday, Sept. 10th at Autodrome Drummond.