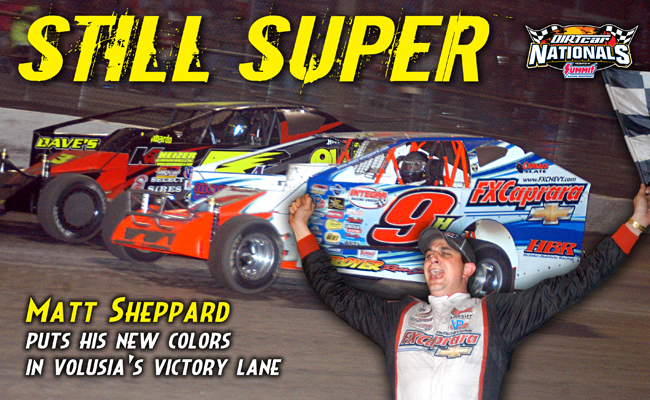 “To come down here and win the biggest race, come right out of the box, it means a lot to this team,” Sheppard said of Saturday’s 50-lap Super DIRTcar Big-Block Modified Series race at Volusia Speedway Park. “I can’t thank all the guys over here with HBR enough. They’ve been working their tails off all week on both cars and I think it showed tonight. We got the cars better every night. We’re going to be a force to be reckoned with this year.”

Sheppard started the race from fourth and his HBR teammate Jimmy Phelps, of Baldwinsville, N.Y., started on the pole. Phelps led at the green flag, but Frenchtown, N.J. driver Billy Pauch was quick to make his move from second. Pauch cruised around the outside lane, passing Phelps before the leaders reached the backstretch.

An early caution in lap 1 slowed the momentum as Wednesday’s Volusia winner Justin Haers was turned around in turn 1. Several cars, including Pete Britten’s No. 21a and Darwin Green’s No. 1g, collided with the No. 3. Haers and the other competitors involved were able to continue racing.

Pauch lead Phelps on the restart, but the No. 3 of Haers wasn’t quite ready to keep racing and slowed on the front stretch before the lap was completed. Haers visited his pit crew and returned to the race track.

The second lap 1 restart led to a seven-car accident, with Rich Scagliotta, Britten, Greene, Billy VanInwegen, C.G. Morey, Kyle Sheldon and Yan Bussiere piled up in front of the flag stand. The red flag waved as track crews worked to pry the vehicles out of the wreck. Crews towed the 42 of Sheldon, 21a of Britten and 8 of Scagliotta to the pit area. Scagliotta’s team worked quickly and sent the 8 back racing, but the 21a and 42 were out of commission for the rest of the race.

Phelps powered ahead at the restart to claim the lead from Pauch, but Pauch found extra speed on the high side of the track and cruised by Phelps in the backstretch in lap 2. With a stretch of green laps, Phelps was able to gain the momentum he needed catch up to Pauch, and he successfully went for the pass in lap 11. The challenge wasn’t over for Phelps, who, by lap 20, was followed by a motivated Brett Hearn, fresh off claiming last year’s Super DIRTcar Series Championship title.

Yellow conditions took over again in lap 22 when the No. 1wgc of Stewart Friesen slowed in turns 1 and 2. Friesen took a quick pit stop and returned to the track before the green flag waved.

“I thought it was just that the tire was dead, but we came in and were able to change the tire and fix the car,” said Friesen, a two-time NAPA Auto Parts Super DIRT Week Syracuse 200 champion from Niagara-on-the-Lake, Ontario. “The boys did a good job, made a couple adjustments, and got this thing turned around. We weren’t going anywhere for a little bit.”

A three-wide battle for second place ensued off the restart, with Pauch, Hearn and Sheppard vying for the position. Sheppard pulled ahead and set his sights on Phelps in first. In lap 27, the HBR teammates raced side-by-side before Sheppard finally powered ahead to claim the lead.

Phelps continued to challenge Sheppard, even as the leaders reached lapped traffic in lap 38. However, it was Friesen who made the final charge. Friesen’s new tire from lap 22 carried him over Volusia’s half-mile well, and he worked his way through the ranks. In lap 47, Friesen pulled tight on the inside to overtake Phelps for second. He worked his way toward Sheppard, and raced alongside the 9H in the last lap, but wasn’t able to make the pass before the checkered flag fell.

“I owe one to my team. That was a good team call down there to change that tire,” said Friesen, whose second-place finish put him at the top of event point standings and won him the signature DIRTcar Natioanls presented by Summit Racing Equipment gator trophy. “It was a real cat-and-mouse game. We got up there and we were in a lane by ourselves, and it’s really fun when you find something else like that.”

Sheppard held off last-lap challenges from Friesen to pick up the win and the $5,000 winnings.

“It was a great win for us,” Sheppard said. “We got that longer green flag run in the beginning and I felt like I was gaining on the leaders. And I got up there, and the car really felt good in the middle part of the race. I was able to get past all those guys and get the lead. The tires died a little bit and it felt like I was struggling a little bit, but we had a good enough car to hold on and bring home the win. It was really great for us.”

Phelps finished the race in third, Hearn fourth, and Pauch fifth. Rounding out the top-ten are Mat Williamson in sixth, Tim Kerr in seventh, H.J. Bunting in eighth, Anthony Perrego in ninth and Justin Haers in tenth.

The Super DIRTcar Series kicks back into high gear Saturday, April 26, when the Big-Block Modifieds take on Fulton Speedway in Fulton, N.Y.