On a green-white-checkered finish Friesen almost gave away the victory when he scraped the wall in turns one and two, allowing Wight enough room to surge ahead, but a caution for a spinning car reset the field and Friesen wouldn’t make the same mistake twice, outrunning Wight to the checkered flag.

Wight, however, used his eighth-to-second run to earn enough points to capture the Gator Championship for the second time in his career. Decker, who won the opening round of DIRTcar Nationals Big-Block Modified competition on Wednesday, rounded out the podium.

Friesen, who was in position Friday to win the NASCAR Gander Mountain Truck Series race at Daytona International Speedway before he was collected in a late-race crash, battled the best in the Big-Block Modified business to win the thrilling 50-lap Feature at Volusia Speedway Park. Tired of second place finishes at the DIRTcar Nationals, Friesen was ecstatic to park the No. 44 in Victory Lane, but it did not come easy. Friesen fought with The Doctor Danny Johnson early then Lightning Larry Wight down the stretch. At the end though, Friesen emerged on top.

“I knew Larry was running second, and has Chili Bowl experience and everything else,” said Friesen, a Canadian native who now resides in Sprakers, NY. “This track is like a big Chili Bowl for slide jobs. I made a mistake there and luckily, we got a mulligan. Our race car was just awesome. I’m so proud of my Halmar team. These guys bust their butts all week. We had a lot of fun all week. We ran second here so many times the last couple years and gave them up. I was like, ‘Oh no not again!’ but it worked out in our favor. We got the monkey off our back!”

Despite finishing second, Wight is able to bring the Big Gator trophy back to New York.

“We got the big one [Big Gator Championship trophy] again,” said Wight, who won the Big-Block Modified Feature on Friday night. “I didn’t want to get that second yellow on the green-white-checkered. I think I had him covered for at least the last lap. He was fast, but I think I could have held him off.”

Friesen built a huge lead over the course of a long green-flag run, but a lap-49 caution resulted in an overtime finish. Wight got alongside Friesen on the first lap-49 restart, but another caution flew, bringing back the pass for the lead.

Unfortunately, Wight may have sustained damage after the two hot shoes made some contact on the backstretch on that first restart.

“We got together a little bit on the backstretch when I got alongside of him. I think it might have bent something in the rear end. On the next restart the car just didn’t feel quite right and had a bad push. I was glad to see the checkered flag fly,” Wight said.

Wight was amped about his DIRTcar Nationals week overall.

“We would have liked to take the Little Gator and the Big Gator home tonight, but we’ll take the Big Gator home with us,” he said. “We really had a phenomenal week. We came down and we were fast right out of the trailer and kind of had the “Tim McCreadie voodoo” with us with the little trailer this week. We had a new addition on the crew come on Brandon Ford and we hit it right where we left off.”

Third-place finisher Billy Decker, back in his red Gypsum Racing Big-Block Modified, had a much better DIRTcar Nationals than he did in 2018. Decker picked up two podium finishes, including one win and finished fourth in the Gator Championship.

“The car was pretty good,” said Decker, a three-time Super DIRTcar Series Big-Block Modifieds champion. “I think we were getting better and made some nice gains tonight. We won the first night, had a pretty good car the second night, and slowed it down last night and had a problem. We got a lot better tonight.”

The upcoming season is looking bright for the veteran driver from Unadilla, NY.

“I think we’re going to be pretty good this year,” Decker said. “These guys work really hard and obviously Larry [Wight] and Pat [Ward] have been doing really well and we want to build on that.”

KSE Hard-Charger Anthony Perrego once again showed his strength and consistency on the race track and finished third in the Gator Championship points standings. If this sets the tone for the young driver’s 2019 season, look for him to challenge Matt Sheppard at the top of the running order.

Three out of the top six drivers in the Gator Championship standings were Gypsum Express cars. Wight was on top with Billy Decker in fourth despite a DNF, and Pat Ward grabbing sixth after the Florida swing concluded. 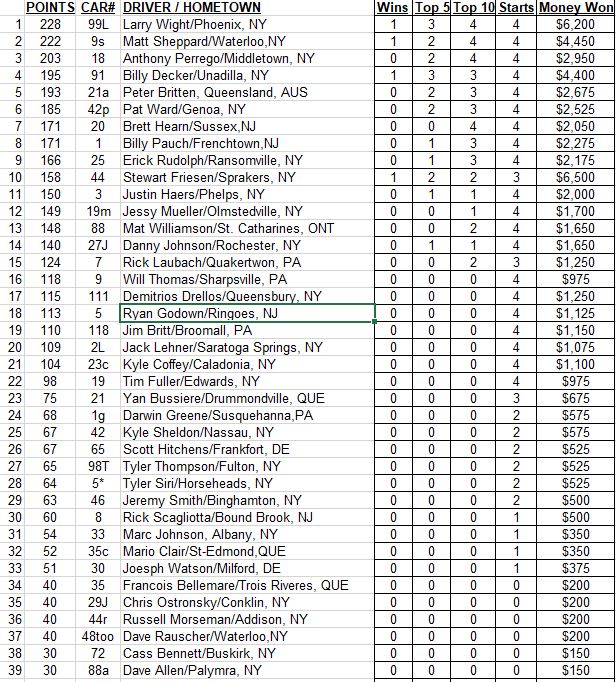