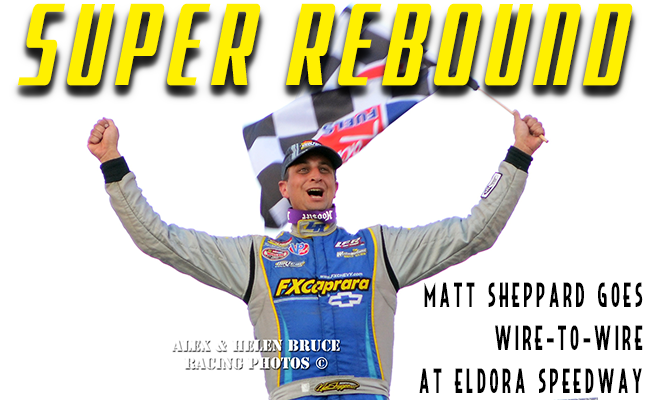 “It means a lot to win here. I mean, after last night anything that could go wrong went wrong,” said Sheppard about his sixteenth place finish the night before. “Turning it around tonight just shows how great this team is and how fast this race car is.”

As the special feature kicked off at the legendary half-mile, Sheppard jumped out to a sizable early lead as Brett Hearn followed in second.

The first caution of the night was brought out on lap four as second place runner, Hearn, slowed to a stop in turns one and two for a shredded tire.

On the restart, the crowd saw Rich Scagliotta, Frank Cozze, and Peter Britten battling for the second spot.

Britten was running up against the outside wall trying to gain some ground on Scagliotta in second place and was able to charge to the outside and chase him down for the second spot.

Britten was closing but had hopes of a yellow to help close up the gap between him and Sheppard.

“It really surprised me how good the bottom was. I thought the groove was going to be around the top. I just followed Scagliotta around the bottom there. We passed as many cars as we could,” said 11th place starter, Peter Britten.

“We dropped a cylinder last night. We changed motors completely with the spare we had in the trailer. I think I was just as good tonight. I think a caution would have given us a crack at him. I think wherever he was running I would have been able to at least pull beside him.”

Larry Wight charged from his 10th starting spot to drive his No. 99L machine to a podium finish.

“We had a good car. We were able to slide up through quick enough. We wasted probably about five laps running in the middle waiting for the top or bottom lane to open up,” Wigh said. “After that we were able to get up to third but just ran out of time. I think a caution would have helped because Peter had a left rear flat. I know we would have gotten him. I think we had something for Matt.”

Sheppard was excited with his first place finish after his misfortune from the night before. “I got caught up with a lapped car last night that tore up the car inside and out. I got a couple of flat tires as well.”

“We qualified horrible but we were good in the heat race and drove up through. We really turned this car around. We had a lot of work to do today and it was really good tonight. We had a terrible last night but we’re just happy to rebound tonight. “

The Super DIRTcar Series Big-Block Modifieds return to action on Thursday, July 21 at Sharon Speedway in Hartford, O.H. after an 11-year absence.