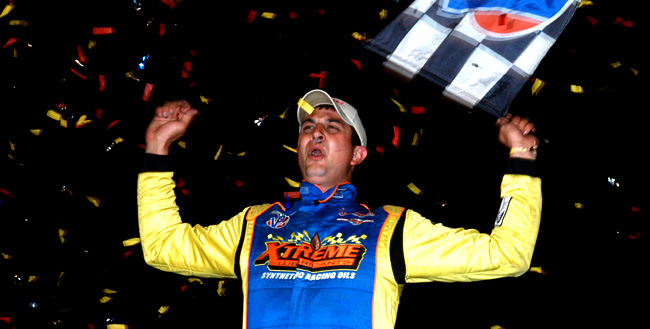 Two-time defending Super DIRTcar Series champion Matt Sheppard snared his first victory of the season Friday night in an epic battle with upstart Larry Wight in front of a packed crowd at Volusia Speedway Park. The duo swapped the lead numerous times throughout the 30-lap feature and each took advantage of the other’s miscue during a pair of late-race cautions.

“It would have been more exciting for me if it was less exciting,” Sheppard said. “Wow, what a race.

“Heck of a race with Larry Wight. We were trading back and forth, side by side. It was a lot of fun.”

Wight, who started on the pole, led from the drop of the green flag before Sheppard took the lead for the first time on lap five. The top spot changed the next two laps before Sheppard grabbed the lead exiting turn four on the seventh lap.

Sheppard chose the inside line for the restart on the first caution – lap 10 – and stormed to a half-straightaway advantage before entering lapped traffic on the 20th circuit. Sheppard maintained a sizeable lead until a caution on lap 25 mixed everything up.

Sheppard again chose the bottom, but Wight capitalized on momentum exiting turn two to grab the lead. He then pulled away to a several car-length lead before a caution with three laps remaining.

“I didn’t want to see that caution because I felt like I was rolling pretty good,” Sheppard said. “And anything can happen on a restart, anything can change, and that’s what happened. He got me on the restart. I thought I lost the race right there. Luckily the caution came out and I got another shot at it.”

Wight picked the outside lane for the final restart, which turned out to be wild. The two were side-by-side as they entered turn one, where they touched wheels and Wight slid up the track.

“I just thought maybe the top had a little more bite,” he said. “Matt just had a better start than I did and I spun the tires. Then going into (turn) one he kind of slid up and took the lane away from me, and caused me to lose another spot to Danny.”

Sheppard pulled away for the victory and Danny Johnson, who claimed last night’s season opener, took advantage of the contact to finish second.

“Being in third spot I hoped they’d take each other out,” said Johnson, who started 11th. “It was unfortunate for Larry to get bumped out like that, but I guess that’s the way racing is.”

Scagliotta, Sheppard, Peter Britten and Bachetti each posted the quickest lap in their qualifying session with Bachetti earning the fastest overall – and only driver in the 17-second bracket – at 17.996 seconds.

Scagliotta, Fuller, Wight and Bachetti picked up victories in the heat races, and Jamie Mills held off Dustin Delaney in a thrilling, side-by-side Last Chance Showdown.

Tickets for Saturday’s finale of the 41st annual UNOH DIRTcar Nationals Presented by Summit can be ordered online by clicking WorldofOutlaws.com/tickets, by calling 877-395-8606 or purchased at the track.