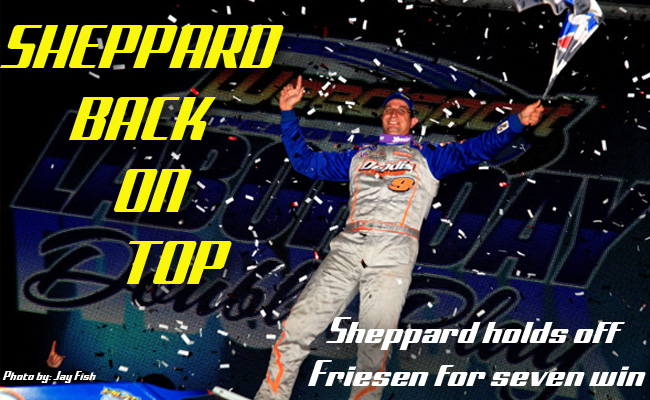 WEEDSPORT, N.Y. — Sept. 4, 2017 — Matt Sheppard gets back into Victory Lane during the Labor Day 100 at Weedsport Speedway. Sheppard survived a late race onset from driver of the No. 44 Stewart Friesen to pick up his seventh Super DIRTcar Series win of the season. This win marks Sheppard’s second consecutive Labor Day 100 victory.

The Waterloo, N.Y. driver entered the Labor Day 100 at Weedsport on a hot streak, winner of five of the previous six Super DIRTcar Series events. Looking to continue his winning ways and continue his trek back towards the top of the championship point standings, Sheppard won his Heat race and earned the pole during the redraw.

Making up the front row of the Feature event was Sheppard and Stewart Friesen, winner of the Series last visit to Weedsport back on July 11. Friesen would get the early jump on Sheppard and the field, leading the first 46-laps of the event.

At the half-way point of the 100-lap race, Jimmy Phelps entered the picture following Sheppard up the leaderboard with Friesen slipping back to third. With just 25-laps remaining Phelps closed in on Sheppard’s bumper as the two made their way through heavy lap-traffic.

A series of yellow flags bunched the field up late in the race. On lap 99, Rob Bellinger brought out the final yellow flag when he made contact with the Turn 4 wall, setting up a green-white-checker shootout.

Friesen would make a bid on the No. 9s looking for his third win of the season but at the end, it was Sheppard taking the trip back down Victory Lane picking up his sixth win in the last seven Super DIRTcar Series starts and his seventh-overall victory of the 2017. Sheppard jumped up to second place in the championship point standings, just 48 markers behind points leader Billy Decker.

The Series heads to Autodrome Granby in Granby, Que. on Friday, Sept. 8 and Le RPM Speedway in Saint-Marcel-de-Richelieu, Que the following night on Saturday, Sept. 9.