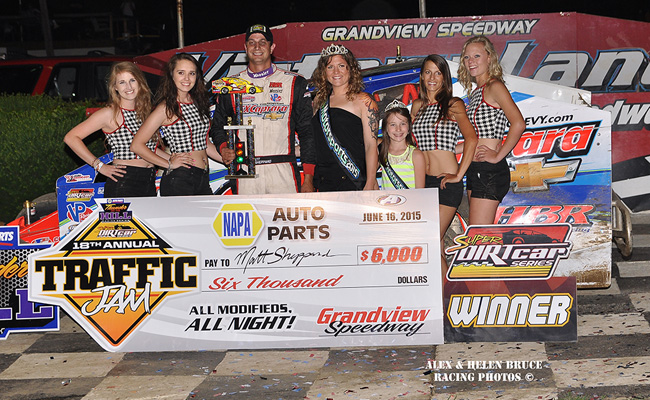 BECHTELSVILLE, Pa. – June 16, 2015 – Matt Sheppard stayed a step ahead of Billy Decker in lapped traffic over the final 20 laps of the 18th annual “Traffic Jam 60” to earn his second Super DIRTcar Big-Block Modified Series win of the season and his first ever at Grandview Speedway Tuesday.

Sheppard, of Waterloo, N.Y., started fourth after the Dig Safely NY 811 redraw and was soon dicing with pole sitter Billy Dunn in a battle for the lead that lasted until lap 19 when Sheppard took charge in the FX Caprara HBR #9h.

After a lone caution on lap three, the race stayed green. Decker started fifth on the field and slipped under Dunn for second on lap 24. He closed in on Sheppard several times, but the Series point leader escaped in traffic each time. Decker was a car-length away when time ran out.

“I saw the checkered flag and was relieved,” said Sheppard, the series point leader and first driver with more than one win this season. “This felt like the longest 60 laps ever. I know they call it the Traffic Jam.”

“Matt had to deal with a lot of lapped cars,” Decker said. “He’d clear them and then I’d have to wrestle with them. Win, lose or draw, it was a great race. This is a great place for us to race at in the Series.”

Friesen earned his podium finish after spirited duels with Watt and Dunn, but he never managed to get close enough to threaten Decker or Friesen.

Howard was the KSE Hard Charger of the race with his 8th-place finish after starting 22nd.

The heats were won by VonDohren, Watt and Ryan Godown.