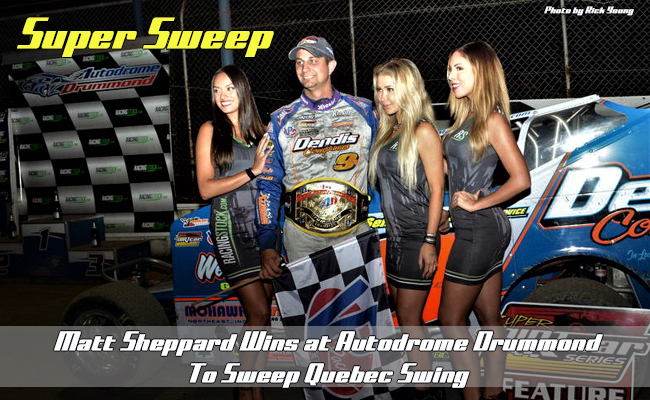 DRUMMONDVILLE, QC, CAN – July 26, 2017 – The Super DIRTcar Series regular went to battle with the top local runners of Autodrome Drummond as the Series wrapped up its first swing through Quebec in 2017. Matt Sheppard brought out the broom as he won at Autodrome Drummond to complete the sweep. The other two steps of the podium at Drummond were occupied by local talents Steve Bernier and Steve Bernard.

Matt Sheppard was all smiles in the Victory Lane.

“It seems that I’m always fast in Quebec, always had success up here in Drummond and Granby,” said Matt Sheppard. ‘’We had a great car and had so much fun up here this week.”

Sheppard had to work hard for his win with local runnesr giving him quite a challenge.

‘’I saw the bottom starting to rubber up and could feel that my car was hooking up and this helped me keep my first position,’’ added Sheppard

History was made on the night as two Drummond regulars, Bernier and Bernard, finished on the podium for the first time.

“It took a little time for to get my groove,” said Bernier.

“I don’t race here that much this year and the rubber tricked me a little bit at the end. I tried to have a second line, I was close. We race clean and seems to be Quebec versus the others. A lot of hard work in the garage by a lot of people paid off tonight,’’ Bernier said, alluding to his clean battle with Bernard as they tried to claim the Series victory.

‘’It was a crazy day today,” Bernard said. “I broke the engine last night, borrowed an engine from Dean Billings at 11am this morning. I got here late but had fun tonight. We started seventh and finished third. I congratulate Bernier for a great run.’’

Polesitter Carey Terrance led the field of 31 cars to the green as Steve Bernier was the early leader with David Hebert in third. Terrance was able to get the lead back from Bernier as the hard charging Hebert was challenging Bernier for second with Peter Britten and Steve Bernard in the top-five with the first 10-laps being completed.

There was a great battle for the lead between Terrance, Bernier and Bernard as they swapped the top spot when Mike Maresca slowed the field down on lap 15 when he hit the wall in turn 4. Terrance kept the top position as Bernard challenged Bernier for second with Brandon Walters bringing the second caution on lap 27 with a flat right-rear.

Bernier jumped to the lead on the restart and grabbed the lead on lap 32 before Phelps and Corriveau brought out the caution on lap 38.

Bernier stayed out front as Bernard was able to get second with Terrance holding third on lap 45. Billy Decker had a flat tire on the No. 91 when he was in a tight battle for a top-five position with 47 laps in the record books.

On a lap 53 restart, Sheppard had a strong run as he challenged Bernard for the second position. Sheppard found some grip on the inside lane and took second from Bernard on lap 64. The driver of the No. 9s machine attacked Bernier and took the lead on lap 70 using the inside lane. Bernard used the same strategy a few laps later and took second from Bernier.

The three leaders went into battle for the lead over the last portion of the feature with Sheppard using the low lane and never looked back to complete the sweep in Quebec with a second win in a row over Bernier, Bernard, Britten and Larry Wight.

Max McLaughlin was the fastest during the time trials session of 39 registered cars to win the Fast Time Award. Britten, Stewart Friesen, McLaughlin and David Hebert won the heat races as Kevin Hamel and Michael Parent were the winners in the Last Chance Qualifiers.

The Super DIRTcar Series will be back in action on Monday, August 7 at Merrittville Speedway in Thorold, ON, CAN for the Bob St. Amand Memorial 100. Race time is 7:00pm. For additional event information, visit www.merrittvillespeedway.com. The Series will then travel to nearby Ransomville Speedway on Tuesday, August 8 for the Alex Friesen Memorial. Race time is 7:15pm for that event. Additional information is available at www.ransomvillespeedway.com.