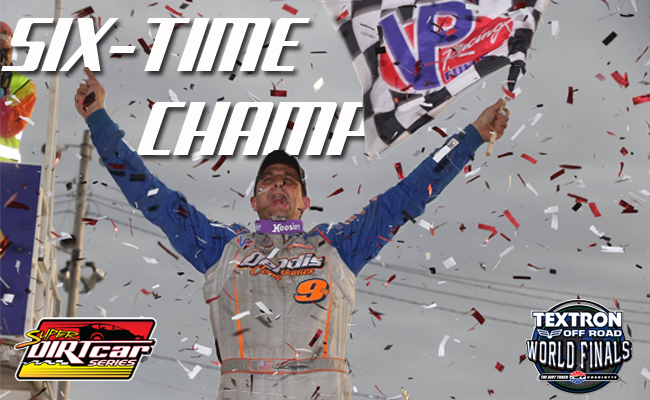 CONCORD, NC — Nov. 4, 2017 — During the final night of competition at the Textron Off Road World of Outlaws World Finals, Matt Sheppard capped off one of the greatest comebacks in Super DIRTcar Series history. The Waterloo, NY driver who was looking down and out after serving a suspension halfway through the season, clawed his way back to the top. In true champion fashion, Sheppard went out by visiting Victory Lane for the 12th time this year and secured his third straight and sixth overall Super DIRTcar Series championship.

After the re-draw to determine the top-five starting positions, Matt Sheppard drew the pole and would lead the field to the green flag for the 40-lap Feature event. Looking determined as ever to pick up that 12th victory to tie his own record of most wins in a single-season, Sheppard rocketed out to a commanding lead over Ravena, NY’s Keith Flach.

Early in the 40-lap event, Sheppard’s closest championship competitor Billy Decker made his way up inside the top-five after starting eighth on the grid.

Setting a blistering pace, the leaders started to make their way through lap traffic. Sheppard took some risky-chances as he was maneuvering his way through and was able to expand his lead over Flach to over two seconds.

As the race went on, the pressure on Sheppard started to lift as Decker started to fade through the field.

“We were moving up but then we had that long caution and a tire just quit after that and had a bottom restart and couldn’t get going,” said Billy Decker.

Much like the hot summer months, Matt Sheppard just proved to be too strong as Super Sheppard would drive the Dendis Companies/West Moreland Golf Club/Extreme Lubricants No. 9s to the 12th victory of 2017 Super DIRTcar Series season.

“What a crowd here tonight, wow this is unreal,” said Matt Sheppard. ‘You can’t take a lap off here; you have to be on the gas running as hard as you can every single lap. It’s awesome to be able to put on a show like that in front of a crowd like this, this makes our season.”

Flach showed speed all weekend at The Dirt Track at Charlotte Motor Speedway picking up two heat race wins and was rewarded with his first ever Super DIRTcar Series podium finish in the feature.

“It’s been a great weekend, great way to end the year,” said Keith Flach. “To finish second to guy like Matt [Sheppard] a multi-time champion is just phenomenal. We definitely had our struggles this year but we’re still relatively new and this is our first podium since we started with the Series. Just very thankful.”

It was when the Series visited Utica-Rome Speedway in early-July that things flipped upside down in the championship point standings.

Super Matt Sheppard and Lightning Larry Wight in a closely-contested battle made contact after running inches away from each other for several laps. The contact sent Wight flipping end-over-end. The ensuing result: an on-track scuffle that all but closed the door on the championship for Sheppard.

Before the on-track incident at Utica-Rome, it was looking like Sheppard had the team pointed towards a sixth Super DIRTcar Series title, holding a 58-point lead over second place Decker. Following the incident at Utica-Rome, the 35-year-old driver was hit with a two-race suspension and lost all money and points from the race. Wight was placed on probation for 90 days.

With the point standings scrambled from the penalties after Utica-Rome Speedway, Sheppard had a BIG hole to climb out of in order to repeat a Series championship. Following the event at Sharon Speedway on July 20, Sheppard was as low as ninth in the championship point standings, and a whopping 185 points behind the leader. Sheppard’s hard work during hot summer months paid off with a victory at NAPA Super DIRT Week that finally put him back in the points lead over three-time Super DIRTcar Series Champion Decker, who finished a dismal 16th-place in the Billy Whittaker Cars 200,

Exiting NAPA Super DIRT Week, Decker was behind Sheppard by 46 points, but the Unadilla, NY driver wasn’t going down without a fight. The following week at Brockville Ontario Speedway, Decker made a late-race pass en route to his fourth victory of the 2017 season, closing the points gap to just 30 points as the Series enters the final weekend of competition at the Textron Off Road World Finals in North Carolina.

That points gap grew ever so slightly over the course of the three-day mega-event at The Dirt Track at Charlotte Motor Speedway. Through the qualifying events and Friday Night’s Feature, Sheppard increased the points lead to 37 points before the Series Finale.

At the end, since July 25 Sheppard averaged a third-place finish and capped off a dream season in thrilling fashion with a trip down victory lane and his third consecutive championship by 71 points over Billy Decker.

While it may not have been Billy Decker’s time to climb back to the top of the standings, the three-time championship still had a stellar season. The Unadilla, NY driver was able to visit victory lane four times with wins coming at Fulton Speedway, Outlaw Speedway, Eldora Speedway and Brockville Speedway.

“I’m so proud of this whole team, they worked really hard to overcome some obstacles,” said Billy Decker. “We dug and clawed and fought. I’m disappointed we didn’t get the championship but I don’t want to take anything away from their efforts and second place in points.”

With the conclusion of the 2017 Super DIRTcar Series season, the Big-Block Modifieds will returns to action at Volusia Speedway Park in February during DIRTcar Nationals. New for the 2018 will be an expanded schedule for the Super DIRTcar Series showcasing the 800 horsepower machines for five nights. DIRTcar Nationals begins Feb. 6 and runs 12 straight nights to Saturday, February 17, 2018. For ticket visit DIRTcarNationals.com