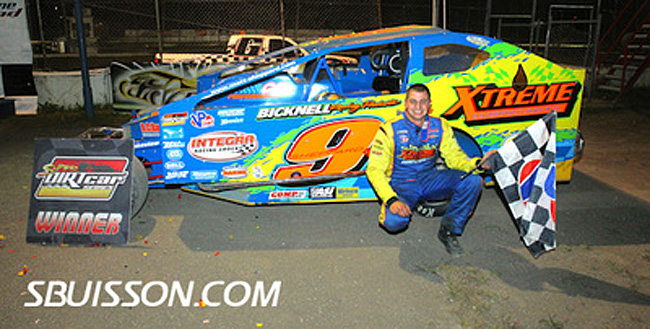 Danny Johnson, who won the DIRTcar 358-Modified Series main event the previous night at Drummond, led the 30-car starting field to the green flag with Billy Decker to his outside. Johnson got the initial jump on the leaders, but a turn-1 lap-1 tangle between Dany Bilodeau and Tommy Sears negated the start. Billy Decker would get the jump on the restart and take an early advantage.

Quebec star Steve Bernard made his presence known early with an outside pass of Johnson for second, just as the leaders prepared to enter lapped traffic. As the leaders negotiated traffic, it was Matt Sheppard’s turn to show some muscle as he powered from seventh into the top-5 in the early stages. A caution for as Mario Clair’s night came to an end in a cloud of smoke saw the field bunched up for a lap-31 restart.

Steve Bernard used the restart to thrill the home-track crowd with an outside pass of Billy Decker to take over the race lead. Matt Sheppard followed Bernard to move into the third position on the restart, with Decker locked in a battle trying to hold onto the second position.

Danny Johnson’s top-5 run would come to an end on lap-48 as he slowed on the backstretch. At the halfway point the top-5 was Bernard leading Sheppard, Decker, a hard-charging Brett Hearn, and Jimmy Phelps rounded out the top-5.

Decker re-established himself as the leader with Sheppard following around Bernard’s #54 on the lap-52 restart. Bernard’s car immediately began smoking on the restart, and his fantastic night ended on lap-58 as the smoke began to bellow from his modified.

Sheppard began to slowly real in the Gypsum Logistics 91 of Decker, and would take the lead using the low-line to take the lead on lap-68, and instantly pull away from the rest of the leaders.

Decker’s car began to fade in the late stages of the race, as Dale Planck and Jimmy Phelps were both able to move around Decker for second and third, respectively.

Sheppard would remain unchallenged as the last half of the race ran virtually caution-free to collect his fourth Series win of the season, all four coming in the last six races.

Dale Planck held off Jimmy Phelps in a good late battle for the runner up spot, with Billy Decker holding on to finish fourth, and Sebastien Gougeon had a fantastic late-race charge to finish fifth.

“Car was awesome, I could move it all around,” stated an ecstatic Sheppard in victory lane. “t’s always fun to come up here and race in front of huge crowds.”

Dale Planck also commented on Sheppard’s late-race dominance, “I couldn’t even see Matt in the field, I don’t think I had anything for him if a caution would come. We’ll take a second.”

A special bonus was offered to the highest finishing 358-Modified. Sébastien Gougeon picked up the $500 bonus with his fifth-place finish.

The Big-Block Modified Super DIRTcar Series will continue next Saturday night as the series will stay north as they will visit the Mohawk International Raceway for race #11 on Sept. 17.