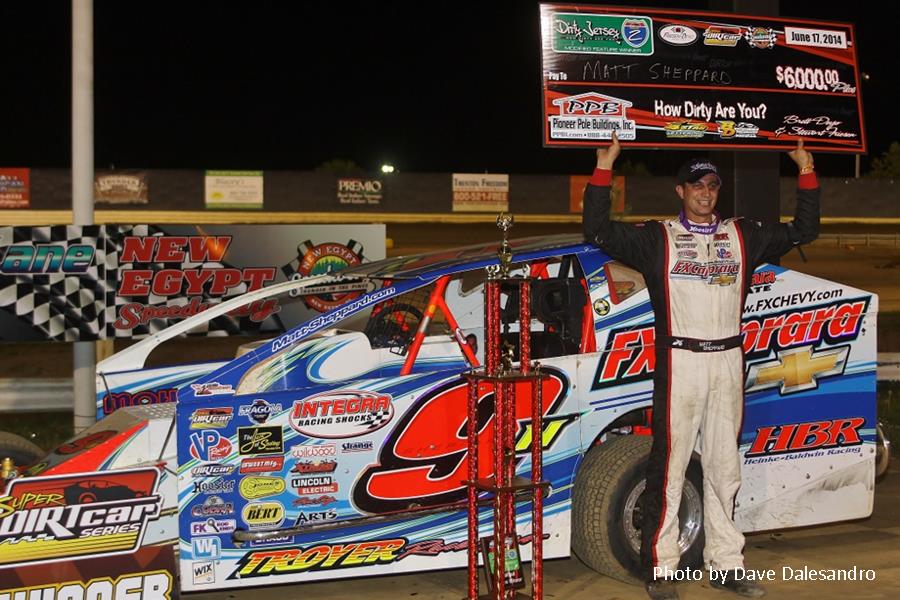 “It was an unbelievable race,” the three-time Super DIRTcar Series Champion said after the action-packed 60-lapper. “Great race track, wide race track, start to finish. There are a few guys that I think could have won that race. Lucky enough, we were able to get to the front and hold on till the end.”

Sheppard, who made the haul from Waterloo, N.Y., started in fifth while Heinke-Baldwin Racing teammate Jimmy Phelps, of Baldwinsville, N.Y., took the initial lead over Tim McCreadie and eight-time series champion Brett Hearn.

However, Sheppard’s FX Caprara Car Co. / Troyer Race Cars No. 9h was quickly gaining momentum from the green. By lap 4, Sheppard was challenging for second against Phelps, who lost a position when McCreadie grabbed the lead in lap 2.

Sheppard claimed second as the No. 4* of leader McCreadie was pulling away from the rest of the field. As McCreadie started lapping cars in lap 8, Sheppard gained ground and tenaciously chased McCreadie through lapped traffic.

In lap 21, the No. 27J of Danny Johnson spun in front of the flagstand, coming to a stop in turn 1, to bring out the race’s first caution. Sheppard was strong on the restart, racing side-by-side with McCreadie before falling behind after a lap. Johnson returned tot he pits in lap 24.

Hometown hero Billy Pauch, of Frenchtown, N.J., was also strong on the restart, charging past Phelps from fourth to third place. He passed sheheppard on the outside in lap 26 and claimed the lead from McCreadie in lap 29.

Behind Pauch, the battle for second place was fierce, with Rick Laubach joining the fray in lap 34 for a three-wide challenge. Sheppard came out ahead, taking second from McCreadie and setting his sights on Pauch in first.

However, Pauch’s racecar was fast, seeming poised to stay in the lead through the checkered flag. Every fan in the crowded New Egypt Speedway grandstands simultaneously gasped with shock as Pauch’s No. 1 broke town in the frontstretch in lap 46. A drive shaft issue took the No. 1 to the pits and left Sheppard’s No. 9h in the lead.

Laubach was fast on this restart, wheeling around McCreadie and charging toward the leader. Another yellow flag in lap 56 slowed the momentum with just four laps to go. Laubach lept into action in the final laps, nosing under the No. 9h in turn 2 of the last lap, but unable to make the pass before the checkered flag.

Laubach, who took home the trophy from last year’s inaugural ‘Dirty Jersey 60,’ was pleased with a strong second-place finish after an exciting race.

“That was a good race. I would have liked to have been watching that one,” Laubach said after the race. “Everyone was running on all they had. It was just good track position, we could move around low, high. When Matt started to see me run the top and I realized he was going to block that from me, then I had to change and do something. I just figured out another groove and it was working, it just needed time. The yellow with four to go took away probably two laps. If I would have had that four in a row continuous, I think I would have had it then.”

After starting fourth and leading early in the race, McCreadie finished in third. Hearn started second and finished fourth. Billy Decker, of Sidney, N.Y., charged from his tenth place starting position to finish fifth. Rounding out the top ten are Larry Wight in sixth, Phelps in seventh, Billy Dunn in eighth, Anthony Perriego in ninth and event co-promotor Stewart Friesen in tenth.

Sheppard’s victory in Tuesday’s ‘Dirty Jersey 60’ marks his first points win of the 2014 season, launching him past defending champion Hearn in the point standings to the lead with 190.