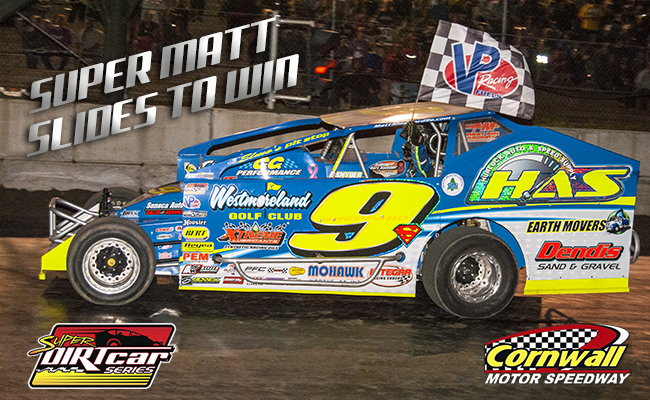 CORNWALL, ON – June 30, 2019 – Matt Sheppard battled up through the top-five to take the lead early in the race but had to go toe-to-toe with The Doctor Danny Johnson to secure the win. Larry Wight crossed the finish line in second place, which is an important points-finish for the Gypsum Express driver. With another third place podium, Mat Williamson didn’t let Sheppard run away with all the points. Williamon started on the pole and even after fading back early, he never let the leader out of his sight.

Super Matt Sheppard now has three consecutive Super DIRTcar Series wins and four total on the quarter-mile Cornwall Motor Speedway. With the O’Canada 100 victory, Sheppard padded his points lead by another ten points on Mat Williamson. But as those who witnessed the race know, it did not come easy.

Sheppard described his race and battle with Danny Johnson, “Man was this place slick tonight. We were right up there on the ragged edge just trying to find every ounce of grip that we could find. I had a heck of a battle there was Danny [Johnson] for a long time. I think we were throwing some sparks down the front stretch [after clipping the wall passing Johnson on the outside].”

Long-time fans of the Super DIRTcar Series remember Danny Johnson in the Sweetener’s Plus red and yellow and now he’s back in that familiar No. 27J. He did not disappoint as he drove right by a lot of fast race cars up to the point position early in the 100-lapper.

However, Johnson only led for a handful of laps before Matt Sheppard closed in for the kill: “Johnson was running a little bit lower than we were. I kept getting a big run up top and he kept closing the doors so I tried to show him a nose on the bottom for a while to try to bait him down the track. I finally got a big run and caught him by surprise a little bit. The sparks were flying but we got out front.”

Out front is where the No. 9s stayed until the 100 laps were completed.

“In open track [Sheppard] seemed better rolling the top and middle. I’m not sure if we were just a little too free or what the deal was. He could definitely get a little better drive off but once we got into lapped traffic, we were a little better on the bottom. We were reeling him in but probably needed five to ten more laps. We were right in the hunt. I think we just gotta work on it a little bit,” Wight said.

For a while, the two Gypsum Express entries were running in second and third positions. Unfortunately while locked in a battle, Billy Decker went off the track on the backstretch and reentered well out of the top-five where he had spent most of the race. Wight kept the No. 99L up front and was ready for any mistake Sheppard might make.

It was another great result for Mat Williamson who now sits thirty-one points out of first place in the standings. The pilot of the family-owned No. 6 started on the pole position but fell back early. “Matt [Sheppard] had a good car. Larry [Wight] was good too. We faded early there. That long run killed us. I think we got the right rear too hot and fortunately, with a couple yellows, things went our way.”

Regardless, Williamson has had an excellent week including two third-place finishes with the Super DIRTcar Series but also picked up a win at Fulton Speedway in the DIRTcar 358 Modified Series.

Brett Hearn finished the 100 lap Feature as the KSE Hard-Charger Award winner after picking up twelve positions. Earlier in the race program, during the Heat Race number four, Brett Hearn and Mike Mahaney made contact. The first instance of contact came on the front stretch when Hearn’s No. 20 drifted high out of turn four and pinched Mahaney’s No. 35 up against the retaining wall. In the next corner, Mahaney got a huge run the low side of the track and hit Hearn’s rear bumper, causing him to spin. Both drivers were able to qualify for and start the Feature.

Last year’s Championship runner-up Erick Rudolph had a strong top-five going until a mechanical problem forced the Ransomville, NY native to park his No. 25R machine.

The pride of Queensland, Australia Peter Britten was strong off the trailer. He made it into the Redraw but unfortunately drew position number twelve. However, that twelve-spot comes with one free Hoosier Racing Tire.

Rookie of the Year contender Demetrios Drellos in the No. 111 picked up his first career Billy Whittaker Cars Fast-Time Award.