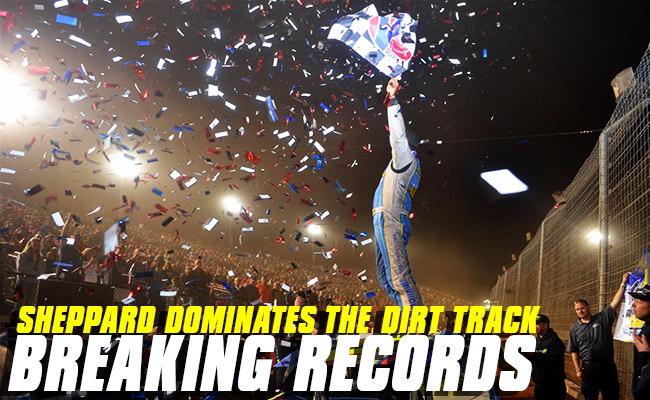 CONCORD, N.C. – October 28, 2016 – Matt Sheppard won his eleventh Super DIRTcar Series feature in style by setting a new series record for the most wins in a season Friday night at The Dirt Track at Charlotte during the Bad Boy Off Road World Finals.

Sheppard started off World Finals strong by winning his heat and drawing the pole for the 40-lap main event. It was smooth sailing from there on out.

“This car is awesome,” said Sheppard in victory lane. “It’s been awesome since we got here. We haven’t had to touch a thing on it. When you have a car that good it makes my life easy.

We started our own team here this winter and to come out and have a record-breaking year like this, I never would have dreamed of it.”

Sheppard and Justin Haers led the 28-car field to the initial green flag.

Mat Williamson was on the move early as he passed Dave Blaney for third-place on the third lap of the 40-lap feature event.

Sheppard drew off a sizable lead over Haers as he caught the tail end of the field by lap eight.

Sheppard worked his way through heavy traffic allowing Haers to close in by lap 15.

Haers began to put pressure on Sheppard in lapped traffic as he looked to make his move. Haers shot up high opening the door for Blaney to dive under him in turn one to take over second. Haers didn’t give up though as the battle for second began to heat up.

“We got stock there behind a couple lapped cars and I got to his back bumper, I was going to try and take a couple laps and just try to roll him on the outside,” Haers said. “As soon as I did it Blaney went by me so I had to try and get back by him. I was just trying to protect the bottom.”

Sheppard led the field to the halfway mark over Blaney, Haers, Williamson and Pat Ward.

Ward made a flawless move as he slid under Williamson but Williamson didn’t give up as he passed him back for fourth. It wasn’t for long until Ward once again took fourth place.

The first caution of the night was brought out with eight laps remaining.

Ward took advantage of the first restart of the night as he advanced himself into third.

The second caution of the night was due to a tangle up between Mike Mahaney and Jimmy Horton in turns three and four on lap 35.

Racing once again resumed with five laps remaining as Sheppard led the way over Haers, Ward, Wight and Decker.

The caution flag flew once again as Max McLaughlin came to a complete stop on the backstretch with four laps remaining.

There was one more caution of the night and it was due to Keith Flach who spun in turns three and four with one lap to go.

On the ensuing restart Decker shot to the outside of Haers as he tried to make the move of the night but it didn’t happen as Haers immediately closed the door for second-place.

“You feel like you’re getting a good rhythm and you’re rolling along there pretty good and you see the yellow come out,” Sheppard said. “I really didn’t want to see that yellow there on lap 39. The car was so good we were able to hold on. I’m just really excited to get this win down here in Charlotte. What a dream season.”